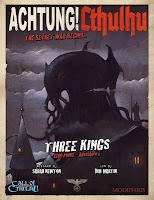 It is curious to note that even after thirty years of being in print and having innumerable supplements published for it by multiple publishers, Call of Cthulhu has received neither support for it in full colour nor any support that took the RPG into World War II. You might quibble at my assertion, but whilst they are in colour, neither S. Petersen's Field Guide to Cthulhu Monsters: A Field Observer's Handbook of Preternatural Entities nor S. Petersen's Field Guide to Creatures of the Dreamlands can be really called a roleplaying supplement. You might quibble at my assertion because the beautiful Les éditions Sans Détour of Call of Cthulhu is in colour, but that though is in French. You might quibble because there is the scenario “Where Byakhees Dare” from Toying with Humans and another four scenarios in Shadows of War, which are all set during World War II, but all are only available in Monographs and thus only available direct from Chaosium rather than at your local friendly gaming shop. So no, and despite hints from both Cubicle Seven Entertainment and Pagan Publishing, no publisher has gone as far as exploring the place of the Mythos during World War II.

So anyone wanting to see such support will be pleased with Achtung! Cthulhu - Zero Point Part 1 - Three Kings, the first release from new publisher, Modiphius Press. The Achtung! Cthulhu line promises two-fisted, tommy gun toting action against the Nazis in a “Secret War” that will uncover terrifying ancient mysteries, legendary war machines, and ghastly dealings with creatures and entities from beyond. Several campaigns are promised, with Three Kings being the first part of the globe-spanning Zero Point campaign. It is currently only available as a PDF and only for Call of Cthulhu, but versions will be for Savage Worlds, Trail of Cthulhu, and eventually, Modiphius Press’ own new RPG, Expeditions.

Technically, Achtung! Cthulhu - Zero Point Part 1 - Three Kings is not set during World War II, but in the months prior to its outbreak. The British government knows that war with Germany is coming and has not only given sanctuary to the Czechoslovakian government in exile, but begun forging links with the Resistance that has sprung up in the wake of the German occupation of the country and its split into the Protectorate of Bohemia and Moravia and the near-independent Slovak Republic. Led by the “Three Kings” of the title, the resistance has informed London that the Nazis are conducting some kind of experiments at Castle Karlstein, south west of Prague. A four member team has been assembled by “Section D” of the British Secret Intelligence Service and will be parachuted into occupied territory where they will make contact with the Resistance in order to determine what is going on inside Castle Karlstein.

The structure of the scenario is such that between the briefing in London and the dénouement within the walls of Castle Karlstein, the investigators to act as they wish. The Keeper is provided with enough information to cover whatever course of action that the players might take. This includes plenty of supporting material that details the area around Castle Karlstein, the opposition in and around the castle, and the members of the Resistance. The latter includes the Three Kings of the title, each actually being an actual historical person. Further support comes in the form of the maps and the briefing handouts, both done as beautiful period pieces, as well as a four pre-generated investigators. Additional information details new skills, such as Jury Rig and Scrounging; new occupations, such as the Intelligence Officer (Research) and Intelligence Officer (Field); and new rules which cover the use of torture and interrogation. Lastly, suggestions are given as to how to run the scenario with characters who are not affiliated with British Intelligence.

Available as a forty-four page PDF, either as an 11.69 MB printer-friendly file or a 22 MB full colour file, Achtung! Cthulhu - Zero Point Part 1 - Three Kings is a nicely done document. The artwork though is pleasingly atmospheric, but the handouts and the maps are perfect. If anyone physical aspect of the scenario captures the feel of its setting, then it is those.

Unfortunately, Achtung! Cthulhu - Zero Point Part 1 - Three Kings is not perfect. The plot itself is far from being wholly original, but arguably, the setting and the feeling of the scenario does much to offset this unoriginality. Plus, this is campaign’s introductory scenario and it is designed to get the players and Keeper involved and interested in the next part, and it does that certainly. The real problem with the scenario is that its tone does not fit its rules. As written, it is Pulpy, but the rules for Call of Cthulhu do not match either this tone and are in all likelihood too deadly for the type of action that the scenario’s dénouement calls for. Arguably, Savage Worlds, used in co-operation with Reality Blurs’ Realms of Cthulhu will be a more suitable fit.

Achtung! Cthulhu - Zero Point Part 1 - Three Kings brings together perfect bedfellows – the Nazis and the Mythos. In doing so, it lays promising groundwork that the rest of the campaign will have to work hard to fulfil whilst delivering an exciting thriller of an adventure in the vein of Where Eagles Dare or The Guns of Navarone. Achtung! Cthulhu - Zero Point Part 1 - Three Kings is an impressive first release from Modiphius Press.