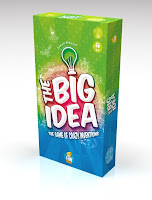 The Big Idea: The Game of Crazy Inventions from French publisher, FunForge, is not a new game. Rather, it is a new streamlined and re-designed version of a game originally published by Cheapass Games in 2000. As a publisher, Cheapass Games put out titles that focused on game play over components, each design coming with enough components to play the game. This invariably made Cheapass Games exactly that – cheap! Out of all of Cheapass Games’ titles, The Big Idea was always a favourite as it required a degree of inventiveness upon the part of the players, and it is this aspect of the original that the new version focuses upon, dropping the share investment element of the original all together. This very modern update now comes in full colour and is very much a party game rather than a gamer’s game in which the players have to create and pitch the “best” inventions possible. Given that the reality television series Dragon’s Den is broadcast in more than twenty countries across the globe, most people will be familiar with the idea behind The Big Idea.

Designed for play by between three and six players, The Big Idea: The Game of Crazy Inventions comes in a slim box that contains two ninety-two card “Item” and “Description” decks, six “Medal” cards, and twenty-four “Blank” cards as well as a slim rulebook that can be read and understood in a couple of minutes or so. The green-backed “Description” cards give single expressive words such as Bulletproof, Edible, and Exotic, whilst the blue-backed “Item” cards give objects such as Butler, Hanger, and Shades, accompanied on each card by a simple line of text such as “It’s like a stylin’ pair of sunglasses…” for the Shades Item card or “…that bullets cannot penetrate!” for the Bulletproof Description card, as well as a pleasing illustration. The “Medal” and the “Blank” cards are used by the players to vote on the inventions that they like and dislike.

The Big Idea is played in a series of rounds – the number varying according to the number of players – during each of which every player will have the opportunity to create and pitch a new invention. After all of the rounds have been played, the player with the least amount of negative votes is declared the “least worst” inventor and thus the winner.

At the start of a round each player has three “Description” and three “Item” cards in his hand. If a player is unhappy with his hand of cards, he is free to discard as many cards as he wants and refresh his hand of cards before putting together his invention. From these cards, he creates an invention using at least one “Description” and at least one “Item” card, although he is free to use as many cards from his hand as he thinks will be necessary for his invention. Once a player has an invention, he put the cards involved down and essentially pitches, or attempts to sell his invention to the other players. Once everyone has pitched an invention, each player votes on the inventions he has heard described. If a player likes an invention, he gives it a Medal card. To every other invention, he gives a Blank card. Any player who receives nothing but Blank cards keeps a single card from his invention as what is essentially a negative point. It is only possible to score negative points in The Big Idea.

“For the businessman too busy to see everyone… For the embezzler who needs a quick getaway when the fraud squad comes knocking at his door… For the accountant with an extra happy life love who just doesn’t need his wife to always know where is… The Limited-Edition Extraordinary Cute Secretary Decoy. A secretary who will always decoy or misdirect unwanted attention for her boss. Plus she’s cute.

From his cards, John-Paul uses “Gun,” “Spectacle,” “Amusing,” “Instant,” and “Kiddie” to create the Instant Amusing Kiddie Spectacle Gun. He pitches this as…

“We live in an armed society. A society with guns, but it does not always have to be an unfriendly society. Especially if we have kids, because that is why we have guns – to protect our kids. Sometimes we need a way to keep our kids happy, even if we have guns. Which is why you need the Instant Amusing Kiddie Spectacle Gun. One shot from this gun and your kid will have an amusing spectacle in an instant!”

From his cards, Simon uses “Beer,” “Medicine,” and “Sweet” to create Sweet Medicine Beer. He pitches this as…

“They always said that medicine was good for you and it was. It just never tasted as good as it was. And that remains as true as an adult as it was for you when you were a kid. Now you can have a medicine that tastes as good as the good it is doing to you: Sweet Medicine Beer.”

Once this is all done, each player votes on their favourite inventions created by his fellow players, giving a Medal to their favourite, and a Blank card to the others. In this case, Simon’s Sweet Medicine Beer garners two Medals and Chris’ The Limited-Edition Extraordinary Cute Secretary Decoy just the one. John-Paul’s Instant Amusing Kiddie Spectacle Gun ends up with nothing but Blank cards and so he must keep a single card to indicate the failure of his invention.

Like many a party game, the success of The Big Idea: The Game of Crazy Inventions depends on its players. Yet its simplicity combined with the entertaining nature of the cards, encourages both participation and invention upon the part of the players. The game can be played by gamers and non-gamers alike, and works just as well as a filler game as it does a party game. The Big Idea: The Game of Crazy Inventions lives up to its title and should prove a source of creative, imaginative fun every time that the box is opened.