A Family by Gaslight 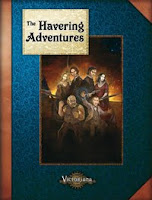 There is a pleasing, if personal note to the start of The Havering Adventures, a trilogy of adventures for Cubicle Seven Entertainment’s RPG of manners, magic, and fantasy in the early Gaslight era, Victoriana. Editor and author, Andrew Peregrine, explains how one of the encounters in the first adventure became the combat example in the core book in what was his very first run through of that scenario. That run through was also my first play of the game’s second edition and it was my character, frustrated at the rest of the players’ indecision that initiated that combat encounter. So it was interesting to note these coincidences in returning to the first of these adventures after a decade.

Originally written for convention play to showcase the setting, the three scenarios in The Havering Adventures have been expanded to give more detail and more support for the GM, as well as adding background material for the game in general. The trilogy concerns the doings of an infamous branch of the upper middle class Havering family, best known for its shipping interests. The branch is headed by Nathaniel, an inveterate gambler, and his decidedly improper wife, the beautiful and decadent Eldren, Susanna. Accompanying them is Nathanial younger brother, Jonathan, who is a police detective at Scotland Yard, and his wife, Selina, a woman of improper origins; plus the family servants. These are the Dwarf, Patterson, Nathanial’s loyal manservant who knows how to apply his fists, and sometimes a boot to almost any situation, and Tobin, Gnome wizardly academic who is attempting to teach Nathanial the art of sorcery.

Full write-ups are given for each of these six, and although the three scenarios are written with the sextet in mind, they can be run with the characters of the players’ own creation with relatively little adjustment. There is advice for the GM throughout the adventures. Further, whilst the scenarios are written as and are designed to be played as a trilogy, there is room between them for the GM to add other adventures. In addition, each of the three scenarios adds specific background material to the world of Victoriana, including horse racing, the royal family, and playing poker. This background material is interesting in and of itself.

The Havering Adventures trilogy opens with “Lost Luggage.” The Havering family has returned to England after a trip abroad, but before they have disembarked, the game is afoot. Someone has made off with their luggage and thus, much to Susanna Havering’s dismay, with all of the new dresses she purchased in Paris! In order to track them down, the adventurers must plumb the depths of the capital’s underworld before attending the hottest day out at the races.

Events take an international turn as the Haverings are invited to travel aboard the inaugural voyage of the Valiant Rose, a luxury airship that is set to revolutionise travel across the Atlantic. In "Behold, the Valiant ones shall cry," the family has the opportunity move among very high society. Given its contained location, this is a very much limited adventure, the player characters having fewer options as to what they can. Nevertheless, succeed at this adventure and they can make the highest connections possible!

Where “Lost Luggage” is a chase and "Behold, the Valiant ones shall cry" all but a “ship in a bottle” affair, the third adventure, "Dead Man's Hand" is a more personal, less adventurous affair that has strong horror elements. An inveterate and fortunately successful gambler, Nathanial spends much of the adventure at the gaming tables playing poker with his wife in tow, but the other family members will busy trying to follow up on the effects of a strange artefact that he wins and must eventually play for in the climax to both the adventure and the trilogy in The Havering Adventures.

Although it needs an edit or two in certain places, The Havering Adventures is a well presented book with decent art and reasonable maps. The advice for running the adventures is also good, and suggestions are given as to both possible sequels to the trilogy and how the trilogy could be run without making use of the Havering family. This is necessary as the adventures are written with the family in mind, but the demands required to make the player characters fit the adventure are relatively slight as long as the characters come from all strata of society. That said, one or more upper class characters are absolutely necessary to play The Havering Adventures, which might be an issue with some groups.