Not Just the Hun in the Sun... 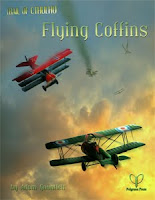 The year 2012 happens to be the centenary of two major events. The first is the more well-known sinking of the RMS Titanic, the world’s first palatial ocean going and proclaimed unsinkable liner. Pelgrane Press has already celebrated that event by releasing RMS Titanic: The Millionaires’ Special, a scenario for its well-regarded RPG of Lovecraftian investigative horror, Trail of Cthulhu. Now it follows it up with a second scenario, one that unknowingly celebrates the other centenary, the founding of the Royal Flying Corps, the arm of the British Army that would support it from the air throughout the Great War, and at war’s end would become the basis for the Royal Air Force. The scenario in question is Flying Coffins, a one-shot affair which for the first time in any scenario for Calll of Cthulhu or Trail of Cthulhu, lets the investigators take to the air. Of course, there have been several scenarios that have involved flying, but in every case, the investigators have been passengers. In Flying Coffins, the investigators take control of their own flying machines, joystick in hand, rudders at their feet, and fingers curved round the triggers. In addition, both scenarios share the same author, Adam Gauntlett.

The setting for Flying Coffins is the Western Front in late 1918. The pilot protagonists or player characters are members of a Royal Flying Squadron serving a sector of the front to which a new enemy squadron has been assigned – Jagdstaffeln or Jasta 32. A specialised fighting squadron of the “Imperial German Flying Corps," Jasta 32 is commanded by the noted ace, Ernst Becker, and it is known as the Lightning Hussars after his old regiment. Sent out on daunting mission after daunting mission, the pilots must conduct bombing strikes, patrols, raids, and reconnaissance, in the face of not just determined German opposition, but also an otherworldly threat, one that willingly strikes at their fragile aerial steeds in an effort to pull them from the sky. With next big Push rumoured to be about to begin, it is vital that the Allies gain control of the sky.

With flying and aerial combat being the focus of Flying Coffins, it is understandable that the scenario goes into some detail about how to handle this in Trail of Cthulhu. As such, aerial combat in Flying Coffins is not that much different to the ordinary Firearms and Scuffling combat of Trail of Cthulhu, but with the aggressor attempting to sneak up on the defender so as to get in a burst of fire that the defender cannot avoid. If the defending pilot survives the attack, he can attack himself or flee, but if he enters the fray, a dogfight ensues. Naturally, this involves both participants attempting to outfly each other – handled by the players bidding points from their Piloting skill, with advantages granted from stunts attempted and from both the manoeuvrability and speed of the aircraft being flown. Additional dangers come in the form of Archie and ground fire. These rules are supported with entertaining period examples.

The scenario itself is tightly wound about its “Spine.” This Spine has an opening scene and a closing scene, but between them the Keeper must slot scenes that alternate between combat and investigation or interaction. For the most part, the Keeper will be deciding the nature of the combat scenes, whilst the players have more choice in terms of the investigative and interactive scenes. In fact, there is only the one set scene that does not involve combat, an interesting and unexpected encounter with a notable personage whose appearance is actually foreshadowed through another NPC.

The scenario allows for some flexibility in how the player characters are set up. There is room here for them to be all pilots serving with another nation, not just British or from the Commonwealth. Indeed, it is entirely possible that the player characters could be German! This will require a little adjusting upon the part of the Keeper, as Flying Coffins is written for use with Allied characters. Nevertheless, the scenario includes stats and short write-ups of some fifteen aeroplanes of the late war period. Also included are six pre-generated investigators. Flying Coffins is designed for play with this number in mind, so will need some adjusting if there are fewer players.

Flying Coffins is not the author’s first foray into writing scenarios for Trail of Cthulhu set during the Great War. His “Not So Quiet,” a scenario from the anthology Out of Time set at a field hospital behind the frontlines could possibly form the basis of a sequel to Flying Coffins if any of its protagonists are injured. As with the author’s previous scenario, RMS Titanic: The Millionaires’ Special, this aerial affair could easily serve as a flashback for an investigator in a later campaign. Flying Coffins though, does betray the author’s age and nationality. Certainly there are references in the scenario’s examples that only an Englishman of a certain age will recognise, and will probably do so with wry amusement.

Flying Coffins comes as a thirty-five page, 17.9 Mb PDF that is pleasingly illustrated by Jérôme Huguenin. It does need another edit and perhaps the pre-generated investigators tend towards the bland. Plus it would have been nice if they had been illustrated as that would have accorded them a little more flavour. Then again, inclusion of details of how the players could create their own aerial investigators would have been a nice touch also. Nevertheless, its contents do a good job of supporting the scenario and a good job of providing period detail aplenty, including a set of period photographs. Clearly, the author’s fascination, if not fondness, for the period, is evident throughout.

Surprisingly, given that Flying Coffins is a one-shot, there is the possibility of sequel, one that would involve a certain NPC mentioned in passing. Should any of the investigators survive this aerial affair, then that NPC should certainly have her revenge in later years… Overall, Flying Coffins is a very different one-shot, one that captures both the uncaring nature of the Mythos and the uncaring nature of early aerial warfare.