Under the Sea RPG 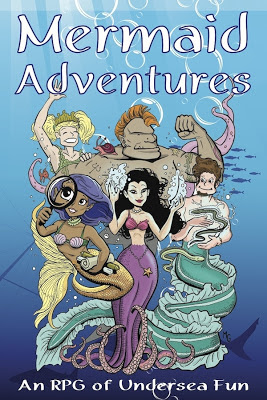 The Walt Disney Company does not do roleplaying games. None of its many and varied properties has ever been licenced as a roleplaying game. Which in some ways is a shame, for the gaming hobby is aging and its adherents have young children or even young grandchildren who do not have an easy way into the hobby or a means of being introduced to the hobby. As much as Fantasy Flight Games’ forthcoming StarWars: Edge of the Empire RPG is effectively the first Disney RPG, the lack of an actual Disney RPG based on its more family orientated properties seems such a missed opportunity. Yet what if there was an RPG that was like a Disney RPG, both in terms of feel and tone? One that would appeal to a younger audience? One whose rules were simple and easy to understand? And one that was easy to run and came with easy-to-use support?

Mermaid Adventures: An RPG of Undersea Fun fits all of those requirements, and more. Plus it comes from an unexpected publisher, Third Eye Games, better known for its more mature themed, action-orientated RPGs, Apocalypse Prevention, Inc. and Part-Time Gods. As its title suggests, Mermaid Adventures is all about the lives and escapades of the seafolk in and around the magical kingdom of Atlantis under the sea. They will help King Neptune and Queen Anastasia as well as their friends and others; take part in the annual Undersea Olympics; explore the Dark Lands that lie beyond the borders of the Kingdom of Atlantis, home to pirates, bandits, and worse; and generally have a fantastic time!

Players in Mermaid Adventures take the roles of these seafolk, all of whom are half-human and half-sea creatures. They include Fishfolk, traditional mermaids known for their curiosity; Eelfolk, who make great friends, but like to play jokes and pranks; Jellyfolk who are almost transparent and are great hunters; Lobsterfolk, hardshelled, but charming; Octofolk, tentacular seafolk with an aptitude for magic; Rayfolk, who can make themselves flat and have a reputation for sneakiness; the big and strong Sharkfolk; and the spiny, Urchinfolk, obsessed with magic.

Characters are easy to create. A player selects the type of seafolk that she wants to play; this sets the base value for the character’s five attributes – Body, Mind, Charm, and Luck – and gives a single positive Quality that all members of the selected species possesses. For example, Octofolk start with the free Quality of Tentacles, which enables them to get things done quickly when using their (hands) tentacles. Five points are assigned to the character’s attributes and then the player rolls on a number of tables to determine hair style and colour, eye and fin colour, some extra details about the character (possessions, clothing, knowledge, features, and so on), and the character’s goal and its accompanying Quality. Lastly, the player selects four more Qualities. These from Artistic and Beautiful to Weapon Training and Writer via Mechanical and Nosy. Additionally, a character can chose Magical Qualities like Healing Touch, Lullaby, and Water Bending. Lastly a character can have an Animal Companion, essentially a second, less capable character that the player controls. This is a slightly more costly option though.

Our sample character is a pretty princess, perhaps a little spoiled, but still generous of heart and ready to go off on adventures. Her nosiness sometimes gets her into trouble, though she will often try and charm her way out of it. If only her parents were not immune to such attempts! She owns a yo-yo, a toy that she found which must have been dropped overboard by a human!

A player only needs to roll a single success to succeed at a task. If she rolls three successes more than failures, then the result is counted a critical success and she gains a small bonus. Conversely, rolling three failures more than successes results in a critical failure with extra consequences… If a player rolls an equal number of successes and failures, then she succeeds, but with minor consequences. A player can attempt a re-roll for a Task, but must take a “Hit” on the attribute, temporarily reducing it by one.

For example, Princess Pandora wants to hold a midnight feast for her friends and knows that the cook will not give her anything. So she attempts to distract the cook whilst her friends sneak into the larder and pinch some goodies. The Games Master or Navigator sets the difficulty of the Task at Tough as the cook knows what a little madam Pandora is, so Pandora’s player has to roll three black dice. Pandora’s player will use her Charm of 3 of course, but for her Royalty Quality – she swishes her tail a bit! – and Giving Quality – Pandora explains that it is for her friends! – she gets to add two more white dice. On the white dice, Pandora’s player rolls 1, 2, 5, 5, and 6, and 1, 3, and 4 on the black dice, or three successes and two failures. Cancelled out, that just leaves her with a single success, which is enough to distract the cook and Pandora’s friends will be able to get into the larder a whole lot more easily.

The same mechanics are used for combat and conflicts, the rules for both covering not just fights, but also attempts to charm or persuade major NPCs or other player characters, to trick them, or to use magic on them. In these cases, the acting player character always rolls the white dice, while the defender rolls the black dice, essentially serving as the Task’s difficulty. Further, in these cases, if a player character or NPC is successfully attacked, they take damage to the defending attribute. Should a character suffer enough damage to reduce an attribute to zero, then it can no longer be used, and the character will suffer an even worse effect, such as suffering a bad scar for the Body attribute being reduced to zero, or being drained of magic for the Luck being reduced to zero. These effects are rolled randomly.

For the Navigator or Games Master, there is a selection of NPCs, advice to Navigator to keep the game moving and exciting, whilst also allowing the players to add details to make their undersea world as real as they want it. This is as much as the advice really amounts to, but in the hands of an experienced Navigator, this should be no problem. Were this squarely aimed at a neophyte Games Master, then this section would be sorely lacking, and it might be worth addressing if Mermaid Adventures were to be given a second edition. That said, the Navigator also receives a set of tables to roll adventure ideas on and a quintet of ready-to-play adventures. These see the player characters come to the rescue of a sinking ship, enter the Undersea Olympics, get lost in the Dark Lands, and more…

Physically, Mermaid Adventures is not quite perfect. It is engagingly presented, particularly in terms of art, done in full colour by Melissa Gay, in a style that perfectly captures the light hearted nature of the game. That said, the layout is a little rough in places, and the book could really do with another edit to give it a little more of a polish. The book is easy to read and an experienced eye will run through this is in an hour or so and be ready to run it with relatively little preparation.

The inspirations behind Mermaid Adventures are obvious and they show in its lightness of the treatment of its subject matter and its setting, which is very lightly drawn. This lightness is supported by the mechanics, which are easy to grasp, and all together they make the game very accessible. Similarly, the scenarios make Mermaid Adventures easy to run and there are more ideas to be got out of the adventure generator, though more adventures would not be unwelcome. Above all, the illustrations do the most to capture the feel of the game and setting – light, adventurous, and action packed. These serve to make the RPG suited to play by younger players, with the setting particularly orientated to young girls, though there is nothing to stop young boys playing too.

Mermaid Adventures: An RPG of Undersea Fun is a game with charm, one that is nicely suited to be run for a younger audience.
Posted by pookie at 16:21