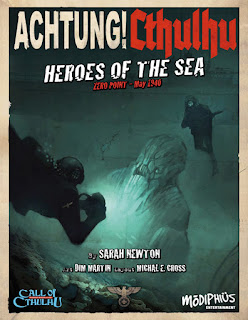 By the time that Heroes of the Sea opens, the hostilities have begun, the Phoney War is over, and World War Two is in full swing. It is the summer of 1940, and in an unprecedented and daring series of manoeuvres, the Wehrmacht has driven through the Low Countries and deep into France, isolating the British Expeditionary Force, the French 1st Army, and the Belgian Army in a pocket around the port of Dunkirk. The British high command already knows that the game is up in France and the Admiralty has already announced OPERATION DYNAMO, the complete evacuation of the British Expeditionary Force and whatever Allied forces can be accommodated by sea to south-east England. As news of this comes, so does word from Agent WOTAN, a British agent deep behind enemy lines – the Nazis have another plan in addition to the mere conquest of France – and if the British Secret Intelligence Service is determine what this plan is, identified as FALL NADEL, its needs to make contact with this agent before OPERATION DYNAMO is concluded.

This is the set up for Heroes of the Sea, the second part of Zero Point, the first campaign published by Modiphius Press for its Achtung! Cthulhu line. Where Three Kings took place before the outbreak of war with Germany and British intelligence knew nothing of the outré ambitions of some parts of the Nazi organisation, the experiences of its agents in occupied Czechoslovakia gave it more than an inkling of, if not Heinrich Himmler’s intentions, then at least those of his subordinates. So as the adventure begins, the heroes have been ferried to Dunkirk and from there are making their across the bridgehead, dodging German attacks and the holdout defences of the British Expeditionary Force, all the while hampered by Allied soldiery desperate to make their way to the beaches and columns of civilian refugees desperate to find a place of safety.

When the investigators do finally locate Agent WOTAN, they will find not the answers that they seek, but a mystery. Unravelling this mystery and then stopping it forms the focus of Heroes of the Sea. In doing so, the investigators uncover the plans of a distinctly ugly Nazi and her cohorts that if brought to fruition will not only stop the Allied forces from being evacuated from the beaches, but will also see the geological clock turned back many millennia and an alliance formed between the Nazis and a race ancient before the first men walked the earth.

To say anything more would be to divulge the details of both Agent WOTAN’s fate and the Nazi’s Operation FALL NADEL. What can be said about the latter is that it draws heavily on an interesting historical fact which the author then gives a batrachian twist to infuse the scenario with its Mythos menace. This is in addition to the perilous situation in which the investigators find themselves – a warzone that is slowly shrinking around them…

Throughout the scenario the investigators will be threatened by menaces both man and Mythos, both of which are given in pleasing detail. This includes the arms and armour of the Wehrmacht, so that the investigators will often find themselves facing tanks and half-tracks, as well as the terror inducing scream of being dive bombed by Stukas. The inclusion of both German and Allied armour allows for the possibility of the investigators commandeering a vehicle of their own and careering across northern France in pursuit of their goals. This may well be necessary as the scenario does involve a certain amount of toing and froing across the Dunkirk bridgehead, all of which will require the Keeper to make use of the scenario’s extensive random encounter tables.

The staged encounters do require careful handling upon the part of the Keeper, more so because what they require upon the part of the investigators is not represented by their skill set. At least not in the pre-generated investigators provided in the adventure, which are carried over from Three Kings. This is less of an issue in other versions of the scenario that use Savage Worlds or the PDQ system for their mechanics, as these rules allow for much more give when player characters lack the necessary skills for a certain situation.

In comparison with the earlier Three Kings, this scenario is not as structurally straightforward and makes more demands upon the Keeper. In particular, he will need to make extensive use of the random encounter tables and find a way to effectively handle the scenario’s almost heist-like scenes towards its end. If the final scenes of the Complete Masks of Nyarlathotep echo those of the James Bond film, You Only Live Twice, then those in Heroes of the Sea echo Thunderball. Unfortunately, the scenario disappoints when it comes to advice for the Keeper on the handling of these scenes and what results from them. This is not to say that they cannot be exciting, just that they are not as well supported as they could have been in terms of advice.

Mechanically, Heroes of the Sea is well supported, with new rules including skills, spells, and occupations. Given the opportunities for battle in the scenario, it is no surprise that various armoured vehicles are described and rules are provided for running skirmish level combat. These are useful additions and will doubtless find their way into other scenarios and situations.

Physically, Heroes of the Sea is equally as well supported and well done. The layout has been done as a secret operation file complete with sections taped and photographs and maps held in place with paper clips. The handouts have the feel of in-period documents, as do the maps, which have a pleasingly vibrant feel, again suitable to the period and many a war map. The scenario is illustrated in a photographic style, feeling all aptly grim – and that is just the ordinary rather the outré war!

Where Achtung! Cthulhu - Zero Point Part 1 – Three Kings was a pulpy affair much in the mode of Where Eagles Dare, although with a Grand Guignol finale, Heroes of the Sea feels much more like a traditional Call of Cthulhu scenario though still one with a Pulp rather than Purist tone. It has a more interesting mystery behind it and it is more sophisticated affair all round. Despite the underwhelming advice for the Keeper in places and containing scenes that the investigators will probably be underskilled to deal with, Achtung! Cthulhu - Zero Point Part 2 - Heroes of the Sea is a well written, exciting, and engaging affair.
Posted by pookie at 19:01