What Are Your Ages? 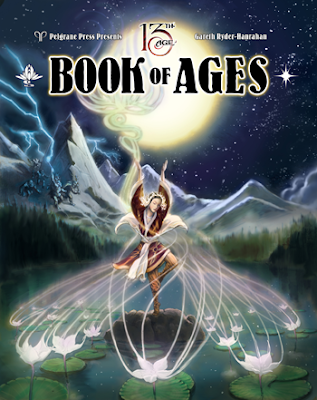 One of the questions raised about 13th Age might be, “What were the other ages?”. Published in 2013 by Pelgrane Press, 13th Age distilled the best features of the then two previous editions of Dungeons & Dragons—Dungeons & Dragons, Third Edition and Dungeons & Dragons,Fourth Edition—and added elements which made each player character unique, emphasised narrative game play elements, and upped the action. In the Dragon Empire of the 13th Age, thirteen great Icons—kings and queens, princes, emperors, creatures, and more—work together, feud, and fight in order to hold onto power and to take it, sometimes to maintain the greater good, sometimes not, as the great and the good theorise that the age might be on the wane... The player characters each have two or three links to these icons and it is these that push and pull the characters into their adventures. In the 13th Age the thirteen icons are the Archmage, the Crusader, the Diabolist, the Dwarf King, the Elf Queen, the Emperor, the Great Gold Wyrm, the High Druid, the Lich King, the Orc Lord, the Priestess, the Prince of Shadows, and the Three—the latter being ancient evil Dragons. But were they icons in the previous age and in the ages before that? If not, who did they replace? And just what exactly, is an ‘age’?

Of course, to play 13th Age, none of these questions need be asked, but the Book of Ages certainly asks them and answers them too. In doing so, it gives suggestions as to what an Age might be and how old the icons might be, the means to define the Ages, and thirteen sample Ages (plus one more). Plus, buried in all of that content are new character Races, magic items, spells, and monsters—and some suggestions as to how all of this content might be used from the perspective of the 13th Age.

Basically, an Age is a period of time with a specific influence or arc in terms of events, which begins and ends with tumult and catastrophe. The most well-known in the Dragon Empire being of course, being the 1st Age, marked by its founding following the defeat of the Wizard King and its ending with the destruction of the city of Axis by the giants. The Book of Ages suggests that an Age might be defined by later historians or according to Icon insight, their being best placed to understand when an Age begins and when it ends. These two options are given by the book’s author and the game’s designer respectively and as with the rest of Book of Ages, the Game Master is free to pick and choose the options that she likes. As to the nature of the Icons, three types are given. The first are Eternal Icons, these having always existed, either because they are immortal or because the Icon is held as a very important office. The second are Age-Defining Icons, ones which heavily influence an Age, but then disappear. The third are Recurring Icons, which appear for an Age or two, disappear, but reappear later on, again and again. In the default setting of the Dragon Empire, it is suggested that the Emperor and Great Gold Wyrm are eternal, the Crusader and Orc Lord age-defining, and High Druid and Prince of Shadows recurring.

These suggestions are not set in stone of course, and exactly in which Age the Icons appear, dominate, rest, or disappear can either be defined by the Game Master ahead of time, or alternatively, turned into a collaborative exercise in history creation by both Game Master and her players. To do this, the Book of Ages provides an ‘Engine of Ages’. To use this, both Game Master and players take control of various factions and link Icons to them—these need not be the Icons present in the 13th Age, but can be created specifically for the particular Engine of Ages. So it might be Lady Lamia associated with serpent-sorcerers, the Tallest Ent with living forests, and so on. Each faction is assigned a number of anchor points—Zeniths when the faction is at its highest point, Nadirs when it is at its lowest, Crossovers when they interact with other factions, and Iconic when a faction’s Icon changed—and these are sown across history by rolling dice. The higher the die type rolled, the further back in history the Age when the anchor is placed. Then for each anchor placed, the player gets to define an associated Legend—essentially a tale still told about that Age, Legacy—an enchantment, group, or structure that survives to the current Age, or a Lair—a dungeon or other problem that dates back to the Age. Lastly, the catastrophe which ended the Age should be defined. Any gaps, that is, undefined Ages, are left for the Game Master to fill in the details. This is all noted down on a matrix so that everyone can see the ebb and flow of the anchor points and begin to build a history.

So for example, Helena is controlling Lady Lamia and the serpent-sorcerers. She has rolled a Zenith in the 3rd Age for her faction and describes this as the serpent men’s attempt to bind their future with sorcery, a period known as the Age of Serpents. It is agreed that the Age of Serpents comes to an end because the sorcerous ritual fails and unleashes demons upon the world. The Legacy for this Age is the Crown of Time, said to be able to control the passage of time. The 4th Age is marked by a Crossover by Jeremy’s Tallest Ent and Living Forest, which Dave as the Game Master, suggests is with the Elves because they have not appeared in the history. Jeremy agrees and describes how the Ents and Elves joined together in order to end the threat represented by the serpent men. This Age of the Green Alliance ends with victory over the serpent men and their imprisonment in the City of Serpents, the Lair rolled at the end of the Age. The Nadir in the 5th Age for the Living Forest and Tallest Ent is described as their having spent much of their effort to stop the Serpent Men and so go into decline. It is known as the Age of Sorrow.

The result is a broadly sketched history, one which both Game Master and her players can their link their characters to via the Icons. It is intended to be a collaborative process, roleplayed out over a session with the Game Master primarily serving as the chronicler and noting everything down, whilst asking the players to explain what happened—and perhaps why. To aid both, the Book of Ages includes a list of prompts and suggestions to get everyone’s creativity going… What this creates is not the history of the Dragon Empire, but ‘a’ history of the Dragon Empire, one that is unique to the playing group.

There are though, two Ages which are not defined using this process. The first is the 1st Age, which defines the Dragon Empire as it is known in the 13th Age, whilst the second is the 12th Age and when that is defined using the Engine of Ages, it is with the intent that it sets up the situation in the 13th Age as outlined in 13th Age. The process is accompanied by both prompts and an extensive example.

The remainder of the Book of Ages—some four fifths of it—are devoted to detailing thirteen different Ages, from ‘The Age of Founding’ to the ‘Age of Balefire’. The primary use of these Ages is to fill in the blanks after running the ‘Engine of Ages’, but in play, they can be kept as a mystery or fully realised, visited via portals or even time travel. Another option is taken from 13th Age Glorantha and makes the previous Ages accessible via heroquests. Each Age is given a rough period when it should happen; a summary, overview, the Icons associated with the Age; its Legends, Legacies, and Lairs; End Times—how it ended; as well as notable Races, Spells, Powers, and Items. So ‘The Age of Founding’ describes the chaos after the death of the Wizard King, how the Emperor tamed the land, and the Giants came to destroy the city of Axis. The Emperor, Great Gold Wyrm, and the Three figure strongly during the Age, as do the Hooded Woman ruled over the unquiet dead before the Lich King, the Spelljack who sowed magical chaos, and of course, the Chieftain of the Giants. One Lair leftover is the Spelljack’s Citadel, stolen flying realm which might be found flying somewhere, and a Legend concerns the fate of the Wizard King, who has never returned despite being known to renew his youth. Monsters include Skeletons of Giant Ancestors, Snapping Skulls, and the Wizard King’s Servants, post-human Arcanites transformed by too much exposure to his magic. Besides being monsters, they can also be a player character Race. As such, an Arcanite can better recharge spells or magical items after a battle and as they gain in experience, can better protect themselves against magic. Like the other races in the supplement, the Arcanites can be added to a campaign as is or treated as a player character’s one Unique Thing—survivor, time traveller, and so on. Besides this, some of the other interesting Ages include ‘Age of the Blazing Meteor’ in which a starship explodes over the Dragon Empire disrupting magic and the survivors ally with Hobgoblins, the Age of the Howling Moon in which the Emperor becomes a werewolf and lycanthropy becomes noble, and the Age of the Terrible Emperor in which he becomes tyrant, destroys all opposition, makes himself immune with astrological magic, but forgets about the monks, who dethrone him with a killer punch. 13th Age kung-fu, anyone?

Physically, the Book of Ages is an attractive supplement illustrated with excellent pieces of black and white art. It is well-written, and the content is ably supported with suggestions and extensive reference lists for ease of use. Although there is no index, these do a decent job instead.

The Book of Ages probably does more to expand a 13th Age campaign than any previous supplement, opening up the history of the Dragon Empire, not only for play, but for set-up too, so that like every player character, every Dragon Empire is unique. This is a book of ideas and campaign themes as much it is history, so that campaign could become a time-hopping, theme-hopping game, where instead of finding somewhere to find and fight pirates in the Dragon Empire, it becomes a case of when, as in the Age of Corsairs. And of course, any one of the Ages could be expanded upon by the Game Master to run a campaign in, were she so inclined. A really ambitious Game Master could run a 13th Age campaign built around Age hopping, almost like the adventures of a well-known time traveller on the television. Certainly, the Book of Ages demands its own anthology of scenarios set in the different Ages, if not that very campaign!

It is difficult not to be thoroughly impressed by the Book of Ages. This is a fantastic book of campaign ideas and options that every 13th Age Game Master should have.
Posted by pookie at 22:07