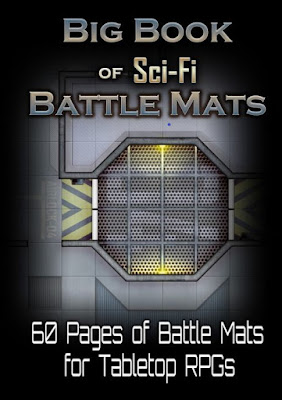 Given the origins of the roleplaying hobby—in wargaming and in the drawing of dungeons that the first player characters, and a great many since, explored and plundered—it should be no surprise just how important maps are to the hobby. They serve as a means to show a tactical situation when using miniatures or tokens and to track the progress of the player characters through the dungeon—by both the players and the Dungeon Master. And since the publication of Dungeon Geomorphs, Set One: Basic Dungeon by TSR, Inc. in 1976, the hobby has found different ways in which to provide us with maps. Games Workshop published several Dungeon Floor Sets in the 1980s, culminating in Dungeon Planner Set 1: Caverns of the Dead and Dungeon Planner Set 2: Nightmare in Blackmarsh; Dwarven Forge has supplied dungeon enthusiasts with highly detailed, three-dimensional modular terrain since 1996; and any number of publishers have sold maps as PDFs via Drivethrurpg.com . Loke Battle Mats does something a little different with its maps. It publishes them as books.

A Loke Battle Mats book comes as a spiral-bound book. Every page is a map and every page actually light card with a plastic covering. The fact that it is spiral-bound means that the book lies completely flat and because there is a map on every page, every map can be used on its own or combined with the map on the opposite page to work as one big, double-page spread map. The fact that the book is spiral bound means that it can be folded back on itself and thus just one map used with ease or the book unfolded to reveal the other half of the map as necessary. The fact that every page has a plastic covering means that every page can be drawn on using a write-on/wipe-off pen. It is a brilliantly simple concept which has already garnered the publisher the UK Games Expo 2019 People’s Choice Awards for Best Accessory for the Big Book of Battlemats and both the UK Games Expo 2019 Best Accessory and UK Games Expo 2019 People’s Choice Awards Best Accessory for Giant Book of Battle Mats.

The newest release from Loke Battle Mats is The Big Book of Sci-Fi Battle Mats, which presents “60 Pages of Battle Mats for Tabletop RPGs”, marked in either one-inch squares or one-inch hexes. The first few maps are plain surfaces—metal sheeting, the cratered surface of a moon or asteroid, a desert and an ice surface, all ready to be marked up with the details of the Gamer Master’s choosing. More featured maps follow—an alien facility of some kind, a forest maze, a blasted surface of some kind, a landing pad and a crater, and so on. Progressing through the book and the maps move inside showing a strange aquarium, a museum or facility of some kind, corridors and rooms, and so on. Many of these are quite generic, making them easy to fit whatever purpose the Game Master wants—the inside of space ships or space stations, bases, museums, and more. Others, such as the subway or mass transit station platform and the desert cantina are more obvious in what they are and what their inspiration is. This does not mean that the Game Master cannot re-purpose them or adapt them as needed, of course.

Towards the rear of The Big Book of Sci-Fi Battle Mats the maps change from having a square grid to having a hex grid. These together depict the surface of a space station—complete with trenches—and open space, space in orbit above two worlds—one Earth-like, one Mars-like, the swirling surface of a gas giant, deep space in both blue and black, and an asteroid field. The hex maps most obviously lend themselves to space battles, the asteroid field being particularly eye-catching.

Physically, The Big Book of Sci-Fi Battle Mats is very nicely produced. The maps are clear, easy to use, fully painted, and vibrant with colour. One issue may well be with binding and the user might want to be a little careful folding the pages back and forth lest the pages crease or break around the spiral comb of the binding.