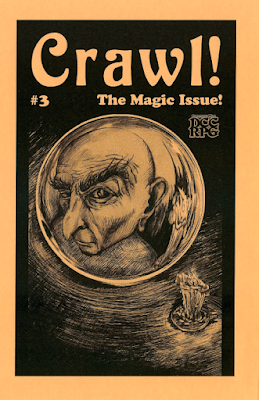 On the tail of the Old School Renaissance has come another movement—the rise of the fanzine. Although the fanzine—a nonprofessional and nonofficial publication produced by fans of a particular cultural phenomenon, got its start in Science Fiction fandom, in the gaming hobby it first started with Chess and Diplomacy fanzines before finding fertile ground in the roleplaying hobby in the 1970s. Here these amateurish publications allowed the hobby a public space for two things. First, they were somewhere that the hobby could voice opinions and ideas that lay outside those of a game’s publisher. Second, in the Golden Age of roleplaying when the Dungeon Masters were expected to create their own settings and adventures, they also provided a rough and ready source of support for the game of your choice. Many also served as vehicles for the fanzine editor’s house campaign and thus they showed another DM and group played said game. This would often change over time if a fanzine accepted submissions. Initially, fanzines were primarily dedicated to the big three RPGs of the 1970s—Dungeons & Dragons, RuneQuest, an Traveller—but fanzines have appeared dedicated to other RPGs since, some of which helped keep a game popular in the face of no official support.

Where Crawl! No. 1 was something of a mixed bag, Crawl! #2 was a surprisingly focused, exploring the role of loot in the Dungeon Crawl Classics Role Playing Game and describing various pieces of treasure and items of equipment that the Player Characters might find and use. The good news is that Crawl! #3 is just as focused, but the subject of its focus is not loot or treasure. Instead, it is magic, for the issue’s subtitle is ‘The Magic Issue!’. Published in February, 2013, Crawl! #3 includes new spell systems, new spells, a new old creature, and more. It is a serviceable rather than a good issue and for one particular reason may not be of interest who are coming to issues of Crawl! fanzine for the first time.

There can be no denying that the magic system in Dungeon Crawl Classics Role Playing Game is fun and flavoursome, but it can be cumbersome. The issue is that because every spell has its own page and its own table, the play of the game is slowed whenever spells are cast, whether by the Player Characters or NPCs. So, ‘NPC Magic and Spellcasting’ offers a more streamlined means of handling spells. The Judge still rolls for the NPC spellcaster, but rather than doing this against the standard table, the Judge is given three results—either a Fumble, a Standard, or a Critical result. For example, on a Fumble, the classic spell Magic Missile inflicts damage on the caster, hurls between one and four missiles at a target on a Standard result, and on a Critical result, the caster can target multiple opponents. The piece includes a couple of offensive spells, several defensive spells, and several spells which fall into the category of ‘Other’. Rounded out with a pair of cultists as sample NPCs given these streamlined spells, this is a fantastic option to help the Judge run her game.

Sean Ellis’ ‘Consider the Kobold: A different take on the traditional kobold’ presents a traditional take upon the Kobold. Not the tradition of Dungeons & Dragons-style roleplaying games, but that of traditional folklore. Here the Kobold is a household fairy who carries out domestic chores as long as the family respects him, although an alternative has it working the mines. The write-up includes full stats as well as various pranks—or cantrips—which the Kobold may play upon those who do not pay it enough respect.

Brett Miller’s ‘Patron Spells of the Supernal Archmage’ presents the patron spells for ‘Van den Danderclanden: A Patron from the Imminent Future’, the Supernal Archmage of Empyreal Aptitude in a distant, but parallel future. Previously detailed in Crawl! No. 1, here his favourite chaotic effects of Spellburn are detailed as Van den Danderclanden’s Hateful Blemish, Snafufubar, and Elastic Reality. The first inflicts the corruption of heavy magic use upon a target, the second focuses and inflicts bad luck upon the target of the spell, and the third can change aspects of a target or an item. There is no denying that these are fun spells to play around with and inflict some chaos upon a campaign, but problematically if the reader has already got the Special Edition of Crawl! No. 1 which collects both patron and patron spells, which makes their inclusion in either redundant.

‘Magic Wand – A 4th-level Wizard Spell’ by Daniel J. Bishop introduces the spell, Raven Crawking’s Magic Wand. This provides a means for a wizard to store spell effects in a wand of the wizard’s choosing, typically one spell, but at higher castings of the spell, up to three spells as well as granting a bonus when casting the spells from the wand. What in effect it allows a wizard to do is cast the spell worked into the wand a second time each day, but always at the Level at which the spell was worked into the wand. This means that the wizard can cast Raven Crawking’s Magic Wand again and again as he gains Levels to improve the ability of the wand. Of course, a wizard cannot simply create wand after wand for all of his spells, but a few spells it expands his arcane arsenal.

‘The Talismans of Anti-Magic – Anti-Magic Items’ by Jon Wilson details items which can prevent magic being cast upon the wearer. Whether they take the form of rings or amulets, totems or fetishes, and whomever has hold of them, they are always linked to spellcasters. They take an action to charge, but when charged they inflict a penalty equal to that given for the anti-magic talisman upon the spellcaster targeting the holder, so reducing their ability to successfully cast a spell. Unfortunately, this is not without repercussions in that the spellcaster linked to the anti-magic talisman must suffer the same effect when next casting a spell before the talisman can be sued again. This is a powerful item, but one that pleasing comes with a price which to paid by someone in the party… Lastly, Colin Chapman’s ‘Let’s Get Familiar: Expanded Familiar Entries’ simply expands the ‘Familiar Confrontation Configuration’ tables to be found in the Dungeon Crawl Classics Roleplaying Game rulebook. It does this for the Lawful, Neutral, and Chaotic tables and enables the player to roll on a table of twenty options rather than fourteen.

Physically, Crawl! #3 is clean and tidy, uncluttered and easy to read, much like Crawl! No. 2. However, there is less art and its look is all the poorer for it. Unfortunately how good Crawl! #3 is depends on which edition of Crawl! No. 1 the reader has. If it is the Special Edition which combines ‘Van den Danderclanden: A Patron from the Imminent Future’ with ‘Patron Spells of the Supernal Archmage’, then not so much and not so useful. Which to be fair is more than likely if the reader is picking the issue up since their original publication. If it is not the Special Edition, then Crawl! #3 will be more useful as its inclusion of ‘Patron Spells of the Supernal Archmage’ readily supports ‘Van den Danderclanden: A Patron from the Imminent Future’. Overall, Crawl! #3 provides solid content, but the repeated content means it is just not as useful.
Posted by pookie at 12:00