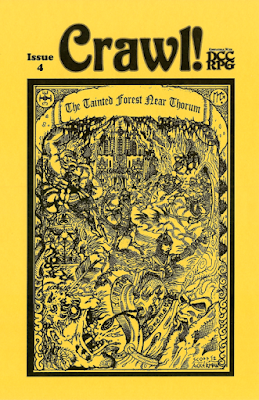 Where Crawl! No. 1 was something of a mixed bag, Crawl! #2 was a surprisingly focused, exploring the role of loot in the Dungeon Crawl Classics Role Playing Game and describing various pieces of treasure and items of equipment that the Player Characters might find and use. Similarly Crawl! #3 was just as focused, but the subject of its focus was magic rather than treasure. Unfortunately, the fact that a later printing of Crawl! No. 1 reprinted content from Crawl! #3 somewhat undermined the content and usefulness of Crawl! #3. Now Crawl! Issue Number Four is just as focused as the second and third issues, but the good news is that its contents remains its own. It also differs in content from earlier in presenting the one thing—and that is a scenario.

Published in September, 2013, the whole of Crawl! Issue Number Four is devoted to Yves Larochelle’s ‘The Tainted Forest Thorum’, a scenario for Dungeon Crawl Classics Role Playing Game for characters of Fifth Level. From the start, you can tell that Crawl! Issue Number Four is an Old School Renaissance scenario, since it comes with a loose cover on the inside of which the scenario’s area map is printed. The village of Thorum has recently suffered a rash of strange occurrences—the holy symbols of the Goddess of Justice have been stolen, damaged, and destroyed; bodies have been stolen from the village graveyard and been found disfigured in the nearby river; the brother of the local head cleric has been kidnapped; and a group of bandits is known to operate near the village. The question is, are these facts and events all connected? The Player Characters are asked to investigate and determine exactly what is going on.

Essentially ‘The Tainted Forest Thorum’ does the traditional ‘Village in Peril’ set-up, but for mid-Level characters rather than low-Level characters. It presents numerous avenues of  investigation for the Player Characters to look into and follow up. The Player Characters should be able to grab a lead or two and perhaps gain an ally or two whilst in Thorum. The village itself is lightly detailed, so the Judge might want to develop it some more herself. Certainly, the Judge may want to provide floor plans of the local Church of the Goddess of Justice, but for the most part, she can make it up as the Player Characters conduct their investigation. Ideally, they should find the leads pointing towards the perpetrator of all of this, though there is the possibility that they circumvent much of the investigation and cut to the chase—the dungeon!

Consisting of just fifteen locations, ‘Macrobius’ Dungeon’ is fairly linear and for the most part, fairly uninteresting. The maze in its midst is really superfluous and some of the locations really deserved  more description. There is a nasty deathtrap though—well, what would be the point of a deathtrap if it is not nasty?—which the Judge will have fun with, as she will with the scenario’s antagonist, Macrobius, a wizard whose ambition and greed has led him to turn to evil. As is traditional.

‘The Tainted Forest Thorum’ is slightly oddly organised in that the scenario’s major NPCs are kept separate from the locations and potential scenes where they are encountered. What this means is that the Judge will need to flip back and forth from locations to NPCs, and although that may not slow the running of the adventure down too, it is slight awkward. In addition, the scenario includes its own ‘Appendix H’ and ‘Appendix N’. The first details a river dragon which the Player Characters may encounter and is likely to be more of a hindrance for them if they engage with it, whilst the latter details a couple of magical items both of which play an important role in the scenario.

Physically, ‘The Tainted Forest Thorum’ and thus Crawl! Issue Number Four, is neat and tidy. It is light on artwork, but the few pieces are rather nice, and the writing is generally clear and easy to read. The two maps feel a bit heavy in their style and the dungeon map feels rather cramped, especially given how little information it has to convey. The format with separate is a very knowing, lovely touch.