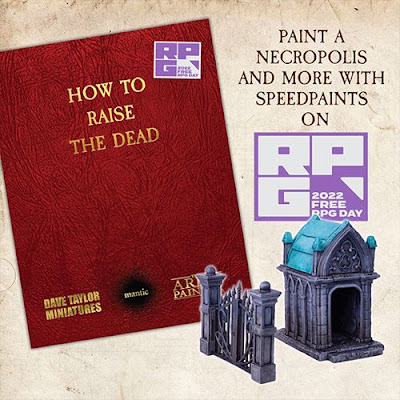 Of all the releases on Free RPG Day 2022, How to Raise the Dead is the least useful—at least in the short term. It will take time for the Game Master to bring any of the contents to the table. Most obviously because she will need to have access to the Terrain Crate and Dungeon Essentials ranges, as well as the Speedpaints Set. Then prepare and paint the terrain following by developing and writing a scenario, perhaps one of the story hooks in How to Raise the Dead, perhaps one of her own. In comparison, most of the other titles released for Free RPG Day 2022 are quick-starts and scenarios and so can be brought to the table much more immediately. And of course, because How to Raise the Dead is designed to make use of the Terrain Crate and Dungeon Essentials ranges, plus the Speedpaints Set, it is also very much obviously designed to sell both them and other terrain sets. The other releases are similarly designed to do that too, so that is no criticism, but with How to Raise the Dead, it is more obvious.
—oOo—
An Unboxing in the Nook of How to Raise the Dead appears here.
Posted by pookie at 12:00