Valley of the Partwork 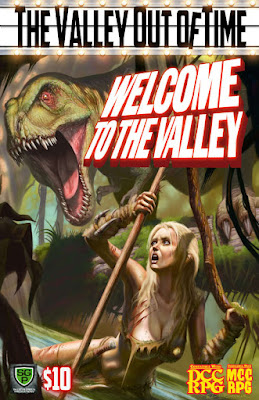 Welcome to the Valley takes you into ‘The Valley Out of Time’. Written for use with both the Dungeon Crawl Classics RolePlaying Game and Mutant Crawl Classics Roleplaying Game – Triumph & Technology Won by Mutants & Magic, ‘The Valley Out of Time’ is a ‘Lost Worlds’ style setting a la X1 The Isle of Dread, and films such as The Land that Time Forgot, The Lost World, Journey to the Centre of the Earth, One Million years, B.C., and others, plus the artwork of Frank Frazetta. Combining dinosaurs, Neanderthals, and a closed environment, it is intended to be dropped into a campaign with relative ease and would work in both a fantasy campaign or a post-apocalyptic campaign. It could even work as a bridge between the two, with two different entries into ‘The Valley Out of Time’, one from a fantasy campaign and one from a post-apocalyptic campaign.

The Valley Out of Time: Welcome to the Valley, however, is short. Published by Skeeter Green Productions, it is the first part of a series of fanzine-sized scenarios and just an introduction, and by the end of it, the Judge is definitely going to want to know more about its setting of the Timeless Valley and where the rest of The Valley Out of Time series will take her campaign. The problem is that although The Valley Out of Time: Welcome to the Valley provides ideas on how to get the Player Characters into the setting—and why, but not necessarily and not definitively how to keep them there. However, it has a strong sense of atmosphere, sweltering and sweaty, and it will provide a session or so’s worth of play. The adventure which is included along with the introduction is designed to be played by four to six Player Characters of First and Second Level.

It opens with a list of hooks and motivations to get the Player Characters into the Timeless Valley, whether that is to search for a rare item or McGuffin, ending up in the valley via random gate or teleport, simple discovery of the vale between two mountain chains, or a previously closed off valley suddenly being opened by gods or the like, for reasons which will become clear. Regardless of the reasons, the adventure has the Player Characters make their way into the valley and struggle through the dense undergrowth and under the thick canopy, suffering from the sweaty heat and the attentions of the local insect life, ultimately to find themselves lost. Then they encounter the first signs of life, a tribe of massive bipedal humanoids going about their business. Tall and hairy, these are Urmanoids, who have the level of development equal to that of the Neanderthals. The Player Characters are free to engage with them in any way they see fit and several options are given for the Urmanoids’ reaction to how the Player Characters act—docile, sneaky, or bold and/or violent. Ideally, if the Player Characters opt for the former options, the Urmanoids will attempt to communicate with them. This sets up some challenging roleplay because the Urmanoids are unable to speak, so the players and their characters will have to find another way.

Once the Player Characters and the Urmanoids have begun to communicate, the camp comes under attack, not once, but twice. First by a giant lizard and then by a pack of Dinychus attracted by the first attack. Helping to defend the Urmanoids cements the relationship between them and the Player Characters, and this should be compounded after a further attack on the way to the Urmanoids’ next camp. This is where the adventure, such as it is, comes to a close.