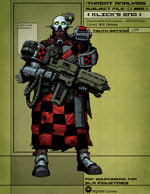 For the second entry in its Data Packet series for SLA Industries, Nightfall Games takes us deep into Upper Downtown and to the all but forgotten blight that is 002 – Klick’s End. In the centuries since the three blocks that make up the neighbourhood were hurriedly raised, the path of progress has done little more than insure its unemployed inhabitants receive their Civilian Security cheques whilst building new infrastructure that only served to keep them from the constant television signals that would inform the inhabitants of the World of Progress. As a result, the inhabitants, known as Klickers, have become xenophobic, slovenly, and clannish, rarely straying from the confines of Klick’s End except to carry out criminal acts. Their ill-educated lives revolve around the taking of Bond-X glue, alcohol, the raising and training of Carnivorous Pigs for use in organised “Pig Fights,” and the harassment of anyone not born within the confines of Klick’s End and entering its environs. The latter includes the rare visits by patrolling Shiver Units – SLA Industries’ militia, and rarer still, any visiting SLA Operatives.

The eleven-page, 4.16 Mb PDF provides just about everything that a GM needs to take his game to the slum that is Klick’s End. With its history all but irrelevant, it focuses upon the towering shantytown, its forlorn inhabitants and their immoral habits, and The Quartet, the four Props or rogue guns-for-hire who have installed themselves as the de facto rulers of Klick’s End. A mix of ex-War Criminals, ex-Dark Night agents, and ex-SLA Operatives, The Quartet has a bad reputation, even amongst other Props, as they readily deal with any client, including the Skin Trade which kidnaps and traffics people. All four members of The Quartet are described and detailed along with two pieces of new equipment – War World Infantry Armour and the FEN WW09 Thrasher Cannon, both used by SLA Industries on War Worlds and in the case of the firearm, illegal on Mort. In addition, stats are given for the typical Klick’s End citizen and a new civilian skill that lets them raise and train the Carnivorous Pigs.

Although 002 – Klick’s End has a GM’s section, there is little in this Data Packet that the players should see beforehand. Besides the write-ups for the NPCs, it gives several means of getting the player characters into Klick’s End. These include taking a wrong turn; following up on a kidnapping; going after the members of The Quartet in particular; and an actual BPN or mission. This has the SLA Operatives sent into the slum to make examples of the population and by that, SLA Industries means that it wants the Operatives to carry out acts of mutilation. This coming out of a new department known as the Moral Rights Division, fronted by a woman whom you almost expect to have a blue rinse.

If ever there was an example of urban blight in the World of Progress, then 002 – Klick’s End surely showcases it. Further, it brings to the fore the urban origins of the look and feel of SLA Industries, the Glasgow of the 1980s under Margaret Thatcher. This Data Packet never lets you forget that the inhabitants of Klick’s End have been forgotten and left behind, their mortal, mental, and moral decay, it being particularly evident in the artwork depicting the grotesque inhabitants. The Data Packet’s reaction to the situation is also as scathingly typical of the times, a moral panic with an extreme solution, the BPN from the Moral Rights Division. There is no doubt that the orders in the BPN are morally objectionable, both in the game and out of it, and whilst it comes out of a sense of moral outrage within the game and is in-keeping with the World of Progress, there are going to be many gamers who find this aspect of 002 – Klick’s End too extreme for their tastes. Were I to run this, then I would have the members of The Quartet hunt them down with extreme prejudice – Klick’s End is their domain after all.

Physically, 002 – Klick’s End is up to the same high standards as oo1 – Ursa Carrien. The writing is succinct and gives everything that the GM needs to use the setting, whilst the art is excellent. In particular, the images of the inhabitants of Klick’s End are delightfully grotesque. If there is anything that the Data Packet is missing, it is maps and perhaps some GM advice. Maps would have been useful in helping the GM run 002 – Klick’s End, but then maps are always useful. Perhaps there is the possibility of a Data Packet of cartography? And GM advice because of the extreme nature of the BPN included.

Where 001 – Ursa Carrien just provided a monster to defeat, this second Data Packet gives much, much more, primarily the location and its situation for the players to explore and interact with, but also the new items and skill. At eleven pages in length, 002 – Klick’s End manages to pack in plenty of gaming and bags of atmosphere into what is about the right size.