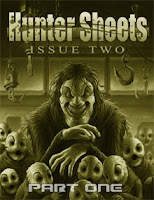 The third release in Nightfall Games’ Data Packet series for SLA Industries is a little different and needs some explanation. With its mix of flavour text tied into the game’s background and two targets to track down and eliminate, Hunter Sheets, Issue Two: Part One feels disparate and unfocused, but when you separate them into their individual parts and learn that this Data Packet is not yet complete, then this PDF begins to make sense. The key to Hunter Sheets, Issue Two: Part One is that is almost a “Part Work,” an incomplete release until the purchaser has everything. In other words, Hunter Sheets, Issue Two is meant to be a whole book and will be available as such, and so will be a sequel to what was the last release for the game, Hunter Sheets, Issue One. Having said all that, the individual elements themselves do stand up on their own.

The first question that has to be answered with this release is, “What exactly, is a Hunter Sheet?”. Within the World of Progress that is SLA Industries, each Hunter Sheet details a subversive target that SLA Industries wants eliminated. In game terms, they are more combat orientated assignments than the usual investigative BPN or “Blue Print News” sheets, and are more popular with Contract Killers and Contract Hunters than the standard SLA Operatives normally played in the game. Hunter Sheets, Issue Two: Part One suggests that they are a fairly recent new innovation and that combat focused operatives have been forming “Death Squads” that have gone deep into Downtown, where they have not gone rogue as such, but have taken advantage of their power to set up small fiefdoms lording it over civilians far from the reach of SLA Industries. Opinion within the company is currently divided as to what to do about this situation, either seeing the use of Hunter Sheets and Death Squads as a necessity, but wanting to curb and control their excesses, or simply wanting to stop them all together. To an extent, the first Hunter Sheet included in this Data Packet can be seen as a way to do the former by making the locating and elimination of its target very public, whilst the second Hunter Sheet shows why SLA Industries needs to issue them.

The first of the Hunter Sheets has been issued for latest serial killer on Mort to break through the thirteen victim threshold and so come to the attention of the media. “Socko” is all the more notorious for the fact that he has about as much presence as well, a sock. Even his victims find him laughable. That is, until he slices them up. The media has picked this up and there betting pools being run on how long he will last before either SLA Operatives get him or some civilian makes a name for himself by doing so. The only thing that Socko has going for him is the fact that he is adept at making a getaway and that he has a fan club.

The second Hunter Sheet is for Sidi Gejkta, a male Wraithen who after being trained by SLA Industries has fled from a War World to home world of Matanwa where he has fomented an armed insurrection. This will lead to a very different kind of scenario, taking the player characters out of the Urban Horror genre as they go the equivalent of “up country” much in the style of Apocalypse Now. In comparison with the first Hunter Sheet, this second one feels less detailed and broader in its approach, its contents lending itself to fewer ideas for the GM. In part this is due to the fact that the second Hunter Sheet also details a figure known as the “Carrion Politician” who serves SLA Industries’ greatest enemy. In game, the player characters are told to stick to going after Sidi Gejkta rather than this figure, though with his full stats given and the devices he uses, the inclusion of the “Carrion Politician” almost begs to be encountered by the player characters.

Throughout Hunter Sheets, Issue Two: Part One there is, as mentioned before, plenty of flavour text that exposes more of the deep background and the “Truth” of SLA Industries. Hopefully we see more of its like in the rest of Hunter Sheets, Issue Two as it hints at the changes across the World of Progress as its defences are weakened and enemies grow in strength.

As with the previous releases in the Data Packet series, Hunter Sheets, Issue Two: Part One is another fine looking release. The ten-page, 2.77 PDF is clearly laid out with pleasing pieces of art. Nor does it suffer from the lack of separation between information for the GM and information for the player characters, with the Hunter Sheets done as full hand-outs for the players’ eyes. It needs an edit in places, perhaps hinting at a slightly rushed production.

Of the two Hunter Sheets included in Hunter Sheets, Issue Two: Part One, the one detailing Socko is the more detailed and all the better for it, making it much easier to run. While neither Hunter Sheet is quite ready to run, both can be developed into full scenarios that should provide two or three good sessions of play.