More Death to the French 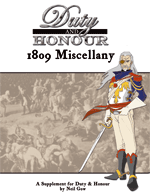 For anyone wanting to explore the Napoleonic Wars, there are plenty of options available in terms of wargaming, using either miniatures and terrain or counters and a board. There are fewer options in terms of roleplaying, but the best of them to date has to be Omihedron Games’ “Indie” RPG, Duty & Honour: A Game of Adventure and Romance in Wellington’s Army. Clearly inspired by the television series Sharpe – and the Bernard Cornwell books that they are based upon, Duty & Honour casts the player characters as soldiers undertaking small and important missions on the edge of Duke of Wellington’s campaign against the French and the Spanish during the Peninsular War of 1810. Already the game has a companion in the form in of Beat to Quarters, an RPG that uses the same rules to run naval campaigns during the Age of Sail, but it also has its supplement in the form of Duty & Honour 1809 Miscellany, which as the “miscellany” of the title suggests is a collection of articles and entries devoted to the game.

The majority of the fifteen entries in Duty & Honour 1809 Miscellany previously appeared as Almanacs that could be downloaded directly from the publisher’s website, and thus they are rarely more than a few pages long. Many of the articles complement each other, with the book’s content divided between elements that support the material to be found in the core rulebook and elements that expand the setting. The focus of the Miscellany is fourfold: character detail, within the regiment, away from the regiment, and the Spain and the Spanish forces of the time, with many of the articles complementing each other.

The supplement opens with “The Enemy Within,” a set of varied, though usually villainous NPCs that can be used to spice up the players’ Personal Missions. Including a well-connected NCO bully, a sultry Spanish maiden, and a trio of flawed officers, the quintet need careful handling in order to prevent their flaws becoming too clichéd. Continuing the within the regiment focus, “Death for a Filthy Rag” adds a whole new regiment complete with officers and enlisted men that the player characters can either encounter or be a part of. Accompanying the description of the 5th Northumberland is a quartet of Missions keyed to the given NPCs, followed by “Band of Brothers,” four ready-to-play characters that are members of the regiment. Unlike the quintet of NPCs given in “The Enemy Within” these four player characters show a little more invention and should be interesting to play.

The focus on Spain in Duty & Honour 1809 Miscellany begins with “The War of Independence!” which adds a whole new aspect to the RPG – the opportunity to play members of the Spanish Resistance. It uses the same rules for character generation, but suggests new Experiences (Life Before Invasion by Bonaparte and time with the Guerrillas rather than life before and after joining the British Army), Reputations, Traits (such as Knife-Fighting and Rabble-Rouser) to create new player characters or detailed NPCs. It comes with rules for fighting with knives, a guide as to run a game based around Spanish characters, four sample NPCs, and five sample Missions that help characters establish their relationships with the Resistance. What these rules offer is a chance to play a less regimented and ordered game, and more interestingly, the opportunity to play female characters that do not fall into the clichés of helpless lady, deceptive hussy, or spirited lover.

“London Gazette Extraordinary!” brings the outside world to the regiment, discussing how news from home can be used within the game, whether it be gossip, politics, or news from elsewhere on the front. Links are given to samples that will further inspire the GM. Its companion piece, “London Calling!” provides an overview of what characters might get up to if they have the chance to return to London. It covers everything from Horse Guards and Gentlemen’s Clubs to dangerous liaisons and shopping, with an understandable emphasis on what the officers might do. It is accompanied by several new Traits like Gentlemen’s Club Membership and Influence at Horse Guards that do further emphasise the place of an officer and a gentleman in Duty & Honour.

Character backgrounds can be developed with several articles to be found in Duty & Honour 1809 Miscellany. “British Army Deployments” lists alternative places where England’s soldiery might be found serving and thus where a character might have had his army Experiences during character creation, whilst “A Matter of Class” suggests three ideas for the various degrees of Social Class within the game. For example, under Professional, it suggests that a character of that Social Class could have been a lowly clerk, tutor, or physician prior to joining up. These are no more than simple suggestions, and perhaps there is scope for a corresponding article that explores the reasons why a character might join the army. Another aspect of character creation is explored in “Curious Curiosities,” that of loot. The entries are listed here skill by skill and are either items such as a pair of bloodied brass knuckledusters for the Intimidate skill or an actual ability, such as an inexhaustible supply of platitudes, quotations, and witticisms for The Arts skill. Either way, they grant a +1 bonus when brought into play with that particular skill.

For officers and gentlemen everywhere, “I Demand Satisfaction” presents rules for duelling in Duty & Honour. Not only illegal, duelling is also dangerous and this is represented by the GM having to add a Joker to his deck to represent the chance that the opponent might score a Perfect Success and inflict a lethal wound on the player character. The emphasis is on duelling with pistols as duelling with swords can be covered by Duty & Honour’s combat rules. The rules are supported with a pleasing example, as well as several new Traits and a sample mission. Again, the emphasis in the article is on the officer and the gentlemen, but then the rank and file used their fists to sort such issues out.

Duty & Honour 1809 Miscellany is rounded out with a trio of scenarios. In “Last Stand of the 22nd," the player characters come upon the remnants of a company and must decide between getting the survivors or important information back to their front lines. The second two, “Cadiz or Bust!” and “The City of Vipers” are linked, but can be run separately with both involving the characters in the fate of the free city of Cadiz as the French move to capture it. All three are supported with appropriate Missions and are decent affairs that should provide several sessions of game play.

There is much to like about Duty & Honour 1809 Miscellany. It is full of little details that will add colour to a Duty & Honour campaign, whilst in adding rules for Spanish characters with the article “The War of Independence!”, the supplement opens up numerous possibilities, whether that is in the form of a whole new campaign or new NPCs. It also fills in holes in the rules with the guide to duelling and suggests details aplenty that can be used to flesh out a character. If you run a Duty & Honour campaign, then Duty & Honour 1809 Miscellany is your next, best purchase.