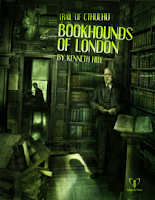 As the effects of Depression spread across England, the great families of the land, the aesthetes, and the bibliophiles have fallen on hard times. Turning to assets of least consequence, they ransack their libraries to pay the bills or death duties, resulting in a flood of horrid heirlooms and terrible tomes on the book trade. Ready to pick up the rarest and hopefully the most profitable of the titles are the Book Scouts, Book Sellers, and Catalogue Agents, working to get a cheap price and a high sale, no matter the book’s title, content, or provenance, let alone the nature of the purchaser. If it happens that this means that there is one more copy of William Pynchon’s 1539 “Monstres And Their Kynde” on the streets of London by their hand – the hand of an “artist” rather than a forger – what matter? And if the latest sale involves knowledge that no man should ever hunger for, what matter that either?

This is the set up for Bookhounds of London, Kenneth Hite’s new campaign setting for Pelgrane Press’ Trail of Cthulhu, the GUMSHOE System powered, clue orientated RPG of Lovecraftian investigative horror. As a setting, it brings to the fore one of the major elements of the genre, the Mythos Tome and all of the eldritch innards that lie between its covers. Not that books will be the only dangers faced by the bookhounds of the game’s title – there are rivals after the same books for sale; forgers are all too willing to “find” them the exact title that they are after; “occult” collectors equally as willing to do more (or even less) than pay to obtain certain titles; and of course, some of the all too dark secrets bound up in London’s history that might be revealed in the hunt for one book or another.

In Bookhounds of London, the player characters take the roles of the titular bookhounds, looking to make ends meet under the fog bound haze of smoking chimney stacks in the heart of an empire that has forgotten so many of its ancient secrets. This is a London that hides a rot behind a metropolitan façade and a bureaucratic indifference, a setting inspired by Alan Moore’s From Hell and the Roman Polanski film, Ninth Gate.

For its Occupations, Bookhounds of London suggests Antiquarian, Criminal, Dilettante, and Tramp (known as the Hobo in other campaign frames) as being suitable, whilst adding several new, altered, and particularly English Occupations suited to the setting: Book Scout, Book Seller, Catalogue Agent, Forger, and Occultist. Greed is added as a new Drive along with new abilities, including Auction, Bibliography, Document Analysis, and The Knowledge (of London).

So far, so English, but what is more interesting about the default Bookhounds of London campaign framework is that its set up provides the investigators with a base of operations – their shop. Best created collectively by the players, it becomes almost a character in itself, granting not just investigative points for the investigators to spend on clues, but also a means to create scenario hooks in the game. A really nice touch is that Hite acknowledges that the idea for the book shop did not come from him, but from a playtest group and was incorporated into the framework.

Naturally, the Book Trade is explored in detail, including ordinary titles and Mythos Tomes as well as the libraries of London and how to handle an auction in dramatic fashion. The latter, as with the running of the investigators’ bookshop, handled in such a way as to avoid their getting bogged down in the minutiae of half-crowns and ha’pennies. Libraries and in particular, the libraries of London are covered in some detail, including what they stock, how an investigator can gain access, and what bonuses such an access might grant.

Pride of place naturally goes to an exploration of the book, detailing in turn their format and condition, and both Occult and Mythos Tomes. Surprisingly, just seven Mythos Tomes are described in detail, but using the earlier detailing of the book formats and their conditions together with his knowledge of the genre, a Keeper should come up with more. Failing that, Trail of Cthulhu has more information on Mythos Tomes as does the Keeper’s Companion for Call of Cthulhu.

Beyond the shelves of the investigators’ bookshop, Bookhounds of London takes the reader on a flavoursome exploration of London in Thirties. This is broken down by area and supported by detailed contact types and rumours plus asides for various topics such as legendary London, law enforcement on the streets, the Underground and London underground, and London’s clubs. London’s physicality is delightfully captured with a stunning set of period maps, not just of her streets, but of her major buildings also. Many of them are done in full colour and like much of the material in Bookhounds of London, will find a use in Trail of Cthulhu in general as well as other RPGs set within the period.

As the heart and crossroads of the Empire, it is no surprise that London is home to numerous cults and secret societies. The presence of many of these, like the Ahnenerbe operating out of the German Embassy and the infamous Brotherhood of the Black, are no surprise, Bookhounds of London expanding upon their descriptions given in Trail of Cthulhu. Added to the expected cults and secret societies are the Hsieh-Tzu Fan, a network of terrorists, smugglers, slavers, and rebels headed by “The Scorpion,” which based out of a Limehouse opium den is most certainly a nod to the Si-Fan of Doctor Fu Manchu fame; and the Keirecheires, an insidious and highly placed cult devoted to Y’golonac. In each case, how the cults and organisations might be encountered in the book trade is discussed as well as how they might react to the investigators’ meddlings.

In addition to the London’s cults and monsters – the emphasis with the latter as is traditional in Trail of Cthulhu being upon their description more than their game stats -- the Keeper can further bring out the strangeness of London with “Megapolismancy,” a magic that uses the city itself as an engine to fuel its sorcery. Inspired by Fritz Leiber’s novel Our Lady of Darkness and developing from the rules given in Hite’s Rough Magicks, it is also a means by which the investigators can involve themselves in the ancient architecture of the city – if they possess the right Lore – or a means by which a Megapolismancer “madman” can turn the city against them.

Where Trail of Cthulhu offers two campaign styles – Pulp and Purist, Bookhounds of London, as part of its campaign advice, introduces three that they can be combined with. The “Arabesque” gives London a Dreamlands-like quality, described as “Baghdad on the Thames;” the “Sordid” offers a city of sin at its worst; whilst the “Technicolour” brings out London’s vibrancy, offering a hyperrealism that owes as much to Hammer Horror movies as it does the works of Dennis Wheatley and Sax Rohmer. Curiously, of the three, it is the Technicolour that is the most easily expanded upon within Trail of Cthulhu, its lurid colours easily bleaching away as the investigators journey into Shadows Over Filmland, a dream-like world merely a penny away. The Keeper is under no obligation to adhere to just the one of these new styles and can easily slip between the three depending on the nature of the dangers that the investigators face. Either way, these options enable the Keeper to flavour his game and serve to mark a Bookhounds of London campaign as being very different to a standard one.

The three campaign styles are supported with a hextet of ready-to-play NPCs. These include rivals and connections both, each including notes that enable the Keeper to configure them not only to the three campaign styles, but also to re-configure them so that they can be reused under different names and slightly different personalities. Each of their descriptions includes a singular element, that of how they might be tainted by through contact with the Cthulhu Mythos. It is a commendable method of presenting NPCs and the format begs, if not for the inclusion of more NPCs within this book, then for a sourcebook all of its very own.

Beyond the three new campaign styles, Bookhounds of London brings a new style of campaign to Trail of Cthulhu. In traditional Lovecraftian investigative horror, the Keeper presents the clues to the threat and the players react to it with their investigators. Here, with the placing of the campaign within a geographical location, it means that the investigators can literally go out and find the adventure. After all, the bookhounds do have to go out in search of a “Squiz,” and who knows what else they might turn up? Bookhounds of London explores this through its advice on running player driven campaigns in relatively short a fashion. Essentially it is a collaborative process, but if that fails, the advice comes down to aping Raymond Chandler’s suggestion of having “two men (or Things) with wavy daggers burst through the window.”

Rounding out Bookhounds of London is “Whitechapel Black-Letter,” a scenario that naturally has the investigators on the trail of a particular book. At the Keeper’s option, it can be tinged with the Ripper murders, but primarily it is a sandbox scenario in which the characters can explore an Occult London and uncover some of its dreadful secrets.

If there is an issue with Bookhounds of London, it is that in places it feels concise. For the most part, this leaves the reader wanting more rather than feeling that the author has not given him enough, except that is, for the somewhat mechanistic Megapolisomantic workings. The section feels as it does need more flesh, though the scenario does include a fully worked through example. Physically, the book is beautifully done, with Jérôme Huguenin’s artwork being excellent as ever.

Given the lack of a sourcebook detailing London within the genre of Lovecraftian investigative horror, Bookhounds of London is a much, much needed resource. Although its focus is primarily the book and the booktrade, the information on outré tomes is equally as relevant to Call of-, Realms of-, and Shadows of Cthulhu as they are Trail of Cthulhu. The background to London is equally as relevant and useful to all of these games.

To draw an analogy, Bookhounds of London is to Trail of Cthulhu as Star Trek: the Next Generation is to Star Trek: Deep Space Nine. It gives the campaign and its investigators a base of operations, in the form of their bookshop, so that adventures and characters can legitimately come to them as much as they can go to the adventures, whether those created by the Keeper or driven by the investigators in a Sandbox style campaign. The book itself brims with detail that supports the setting and brings it alive, though in places it feels perhaps a little too concise, as if it needs just a little more information. Otherwise, Bookhounds of London is another beautiful book for Trail of Cthulhu that brings the Old Smoke and its dissolution to life with the investigators on its intellectual coattails.