There is something just so cool about strapping on a jet pack, putting on a be-finned faceless helm, grabbing your Mauser C-96 automatic pistol, and once dressed, leaping into the air on a jet of flame. Whether it is the Republic serial, King of the Rocket Men or its graphic novel adaptation from Innovation Comics, or the late Dave Stevens’ The Rocketeer, both the comic book and the movie, the “rocket man” is one of my favourite Pulp action archetypes. It is so iconic of the two-fisted, Pulp action genre that it appears again and again in numerous Pulp genre RPGs, so it is no surprise that it gets a supplement all of its very own for Triple Ace Games’ Daring Tales of Adventure line. True, Daring Tales of Adventure: Rocket Rangers is a short supplement at just ten-pages, but it includes just about everything that a GM needs. 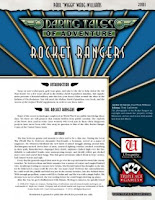 Triple Ace Games’ Daring Tales of Adventure line is a series of mostly scenarios leavened with the occasional supplement – like this one – that are set against a pre-World War II background of two-fisted, heroic action. They are written for use with Pinnacle Entertainment Group’s Savage Worlds, which handles Pulpy, slightly cinematic action rather well, but Rocket Rangers is available not just for Savage Worlds, but also for the Ubiquity System, which makes it compatible with Exile Game Studio’s Hollow Earth Expedition.

Rocket Rangers presents the story of how with US government backing, Professor Alexander MacDonald developed the technology behind the rocket-packs that enable the wearer to fly and how they were used to equip the Rocket Rangers Corps which operated during World War II and beyond. Commanded by Colonel William “Goat” Gruff, the handpicked and highly trained members of Rocket Rangers Corps are organised into squads of eight, each squad being deployed on fast strike missions, usually deployed in bombers and transports. Arriving near the target, the Rocket Rangers would either jump out of their transport or be dropped from their bomber to fall almost to the ground before igniting their rocket-packs and leaping back into the air. Although the use of the Jetpacks allow cruising at high altitude, their limited fuel supply usually means that the Rocket Rangers have enough to perform their current mission, but no more and thus need to find their own way home.

Highly trained, strongly motivated patriots, and upright, moral characters, each squad consists of Commander, Heavy Support trooper, Medic, Scout, and Technician. The Technician not only doubles as the mechanic for his squad’s equipment, he also handles all of its demolitions needs. Given their role as a fast strike unit and the low load capacity of the rocket-packs, the Rangers travel lightly armed, usually only a handgun or an SMG. Indeed, even the Heavy Support trooper does not carry anything heavier than a Browning Automatic Rifle.

In addition to describing the formation of the Rocket Ranger Corps, Rocket Rangers also gives the rules using their rocket-packs in a game, complete stats for all of the positions in a Rocket Ranger Corps squad, and an enemy to fight. In keeping with the period setting of the supplement – primarily World War II, and the classic Rocket Man sub-genre, it is no surprise that this enemy consists of the Nazis. In particular, SS-Raketentruppen (SS-Rocket Troops), which with the outbreak of war would be reformed as the 1st SS Totenkopfraketentruppedivision (SS Death’s Head Rocket Troop Division).

Unlike the Rocket Ranger Corps, this unit is not kept secret, it first having been seen at the Berlin Olympics of 1936, and unlike the Rocket Ranger Corps, this unit goes into battle using advanced weapons, most notably, their “Gyro-Jet”-like Raketengewehr or “rocket rifle” and “electricity rifle” or Spannungsgewehr. Stats are given for both of these weapons, a typical SS-Raketentruppen trooper, and Doctor Werner Schmutzig, the inventor of Germany’s rocket-pack technology.

Rounding out the supplement is a sextet of adventure seeds. These, just like the rest of the content in Rocket Rangers, are the same between the two versions of the supplement for Savage Worlds and the Ubiquity System, except that is, for the last scenario seed. In the Ubiquity System version, the last scenario seed gets the Rocket Rangers to the Hollow Earth, whereas for the Savage Worlds version, several Daring Tales of Adventure scenarios are suggested as being suitable for being adapted to a military style campaign.

Given that Rocket Rangers focuses on a “Special Forces” hit-and-run style American unit, it is no surprise that it is suitable for use with Weird Wars: Weird War II, Pinnacle Entertainment Group’s setting for Savage Worlds that combines World War II with weird science and the occult. In fact, it is a perfect plug in. The supplement also makes suggestions as how its contents can be shifted back from the 1940s to the 1930s, the GM using the material to run a more Pulp Adventure style game, or even as an aside, to use the material in the Victorian era, with Red Coats as Rangers rather than Americans. In this way, the contents of Rocket Rangers could be used in conjunction with Pinnacle Entertainment Group’s Space 1889: Red Sands.

Our sample is perfect for a Pulp style campaign set during the 1930s. Jimmy’s Uncle Albert used to do work out his family’s barn and when his chores and homework was done, and sometimes even when they were not, Jimmy would go out and help him. Whatever Uncle Albert was working on, it involved a lot of bangs and whooshes, and Jimmy was pretty sure that involved a rocket of some kind. Jimmy had always been fascinated by anything that flew and was happy to help out. Whoever wanted Uncle Albert’s project wanted it bad enough to blow up the barn and seriously injure him, but Jimmy managed to get away with his Uncle’s latest invention. Currently he hunts for whomever it was who attacked his Uncle, armed with a pair of guns he got from his Uncle’s attackers and a store of rocket-pack fuel that his Uncle had elsewhere.

Similar shifts in setting can be made with the Ubiquity System version of Rocket Rangers. It is already compatible with Exile Game Studio’s Hollow Earth Expedition which is set during the 1930s, both on and under the surface of the Earth. Rocket Rangers includes one suggestion as to how the American unit it describes could be brought to the Hollow Earth and the enemies it presents are Nazi villains, and since there are Nazis already in the Hollow Earth… Lastly, Triple Ace Games has its own Victorian era RPG, Leagues of Adventure, which describes itself as “a rip-roaring setting of exploration and derring-do in the late Victorian Age!” So more than suitable then.

Physically, both versions of Rocket Rangers are well done. A nice touch is the use of fully painted miniatures as illustrations, these figures actually having inspired the supplement’s additional, Patriotic rule about carrying and planting the Stars & Stripes to inspire members of Rocket Rangers Corps. Of course, the source of the miniatures is mentioned at the end of the supplement. If there is an issue with both of the supplements it is that they both need an edit and a fact check – Yale is not in Boston, but Connecticut!

At its heart, Rocket Rangers is a wargaming supplement, one describing a unit best suited for use with Savage Worlds’ skirmish rules. After all, the use of miniatures as illustrations does more than imply the fact. Yet there are plenty of roleplaying elements in there too, so a Rocket Ranger Corps squad could easily be run as a roleplaying party performing small scale operations. Plus, the supplement includes a suitable enemy to fight and there is a companion piece available for both rules systems in the form of Elite Nazi Units. Short and sharp, Daring Tales of Adventure: Rocket Rangers has everything you need to strap on a rocket-pack and launch your Rocket Rangers game.