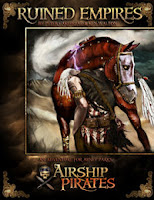 Ruined Empires: An Adventure for Abney Park’s Airship Pirates is the first release for Abney Park’s Airship Pirates RPG Based on the Songs of “Captain” Robert Brown, Cubicle Seven Entertainment’s Steampunk, Post-Apocalypse, Pirate, and Time Travel RPG. This is a scenario in three parts designed for three to six players which can be completed in two good sessions, or three if your players like to take their time. It involves an assignment with menaces, a treasure hunt, ravenous beasts, a stylish MacGuffin, a chase, a betrayal, and more!

It opens with the player characters in the Skyloft known as “Jewel of the Skies,” Isla Aether, dining upon the best deep fried that money can buy! They are approached by an aide to the Skyloft’s dissolute governor and asked politely and pointedly if they would like to go on a treasure hunt for him. He needs funds and he has a genuine treasure map. Getting to where “X Marks the Spot” is nary a challenge, but once on the ground, the player pirates must deal with wild and hungry beasts; rival, if not potential allied treasure hunters; and the somewhat soggy nature of the site. There is a decent amount of treasure available if the characters decide to stick around and search.

Once back in the air there is opportunity for an aerial fight, but this is against a difficult foe and the inference is that they should run for it. Having returned to Isla Aether, they discover that the fortunes of the employer have been reversed and their own with it. All too quickly, they find themselves slung behind bars and having to engineer not only their escape, but also having to engineer a change of government.

Ruined Empires is for the most part a fairly straightforward adventure. The authors give advice here and there as to how to stage various scenes and give pointers as to where a GM might insert a scene or encounter of his own devising. There is also an opportunity for the GM to place in the hands of the player pirates the MacGuffin of all MacGuffins, if he has not yet done so. That given that this is the first title released as support for Airship Pirates and the supplement supporting said use of the MacGuffin of all MacGuffins is yet to be released, it well be a bit early in a campaign for the GM to introduce that…

Physically, Ruined Empires is a nice looking book. The cartography is clear and simple, and the artwork attractive. The writing is good and is more than flavoursome in places, especially when adding colour and detail to the adventure’s setting and personalities. If there is an issue with Ruined Empires, it is that its starting and ending location could have been more detailed so that a GM could have used it beyond the length of the adventure.

If all goes well, at the end of Ruined Empires the pirate characters should have added a little to their coffers and made an ally or two. Of course, it could go the other way and they be rewarded with enemies and penury for their failures. Along the way it will have further shown how the rules work and given the GM some colourful NPCs to add to his game. Whilst a book of adventures, a campaign, or some other support would have been welcome, Ruined Empires: An Adventure for Abney Park’s Airship Pirates is a solid, uncomplicated affair that should slot into most Airship Pirates campaigns.