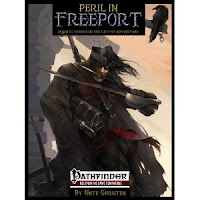 Freeport: City of Adventure, the very setting that heralded the arrival of the d20 System and third party support for Dungeons & Dragons, Third Edition is over a decade old now. We saw our very first glimpse of this pirate island nation back in 2000 with the release by Green Ronin Publishing of the classic scenario, Death in Freeport, and in the decade since, the city and its environs has been supported with sourcebooks and scenarios, and a campaign, as well as companion guides for running the setting using a variety of different rule sets, including Savage Worlds, Dungeons & Dragons, Fourth Edition, Castles & Crusades, the Pathfinder Roleplaying Game, and True20. All of these, bar Savage Worlds, it should be noted, being variants of Dungeons & Dragons in one form or another. Of late, the Freeport: City of Adventure setting has received little in the way of support, but since it is a personal favourite, it was pleasing to note that there has been one scenario for it this year, Peril in Freeport.

Published by Adamant Entertainment through Cubicle Seven Entertainment, Peril in Freeport is for use with the Pathfinder Roleplaying Game. It is written for a party of characters of between sixth and eighth level, each of whom should get a level’s worth of experience from playing through the adventure. To get all of the details of the monsters that appear in Peril in Freeport, the GM will need access to a copy of the Pathfinder Roleplaying Game Bestiary as the main villains of the piece are fully described there. He will also find a copy of the Freeport Companion: Pathfinder Edition useful, although it is not totally necessary as much of the action in the adventure actually takes place away from the city itself. Indeed, this is such that a GM could easily place the events and plots of this scenario around any island chain or archipelago within his own campaign world. Of course, as a setting, Freeport: City of Adventure is designed to be dropped into most fantasy worlds. The scenario does not specify that any particular class is needed to play through it, but the player characters will find the Perception, Profession: Sailor, and Swim skills to be useful. Of course, this being a Freeport adventure, the adventurers are more than likely to end up under water and so will need a means of breathing once submerged.

Peril in Freeport opens with a bang, or rather a wave! The city being struck by tidal is a sign that it is in danger again, but a more insidious threat appears when the adventurers come upon a Halfling, desperately in need of a good cup of tea, who has been shipwrecked after the vessel he was travelling aboard was attacked. He suspects that both his family and the ship’s crew have disappeared and offers a reward for their safe return. Tracking the culprits down puts the adventurers on the track of a conspiracy to sink ships sailing in and out of Freeport, and then a slaving ring, and then eventually a really big bad!

As an adventure, Peril in Freeport involves lots of sailing and swimming and sneaking and fighting. In fact, this is a more physical adventure than a cerebral one, but given the piratical nature of the setting, an action orientated adventure is fitting. During the first few chapters there are plenty of breaks during which the GM could insert adventures of his own devising. In fact, it might be a good idea for the GM to add them as the scenario’s plot could be a little linear in nature.

Physically, Peril in Freeport is good in places and bad in others. Certainly both the art and the cartography are good, while the editing veers towards the bad in places. Also, presenting the book using a serif rather than a sans serif fount might have made it easier to read. Similarly, some GMs might object to having the adventure’s monsters all in one place in a large appendix at the back of the book due to the need to flip back and forth between the adventure’s text and its monsters.

Over all, this is a solid affair that should present no difficulty to the GM in adapting to the other RPG rules that support Freeport: City of Adventure. Once under way, Peril in Freeport should provide a gaming group with several solidsessions of straightforward action and adventure – more if the GM adds his own adventures.