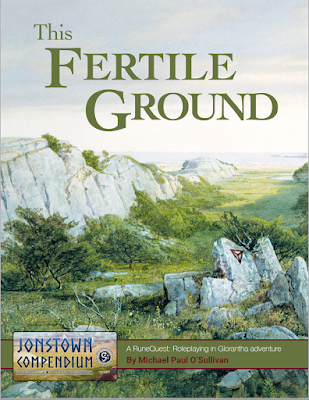 What is it?
This Fertile Ground is a short, two-session scenario set in Beast Valley in Dragon Pass for RuneQuest: Roleplaying in Glorantha. It is within easy journey’s travel distance of the Colymar tribe lands and so can be run as part of the Colymar campaign begun in RuneQuest: Roleplaying in Glorantha – QuickStart Rules and Adventure and then continued in and around Apple Lane as detailed in the RuneQuest Gamemaster Screen Pack.

This Fertile Ground is well presented, but is not illustrated and needs another edit. The maps are decent though.

Where is it set?
This Fertile Ground takes place in Chasteberry Hollow in Beast Valley where the Man and Beast Runes vie for control of the area.

Who do you play?
This Fertile Ground does not have any strict requirements in terms of the characters needed, but ideally, the player characters should include an Ernalda (or other Earth deity) worshipper or even better, an Ernalda priestess.

What do you need?
This Fertile Ground can be run using just RuneQuest: Roleplaying in Glorantha. If it is run as part of the Apple Lane campaign then the RuneQuest Gamemaster Screen Pack is recommended.

What do you get?
This Fertile Ground takes place in Sea Season in Beast Valley where two different Beast Men cultures have clashed over access to land and that clash has escalated into conflict between the opposed Man and Beast Runes. On the one side are the Coney, peaceful, sentient rabbit-folk from Esrolia who have settled Chasteberry Hollow where they farm and harvest the chasteberries, an important ingredient in their fertility potions. On the other are Leporids, the larger hare-like nomads for whom Chasteberry Hollow is their traditional mating ground. Enter the player characters.

Several plot hooks are given to get the player characters to Chasteberry Hollow. These include being sent to acquire several vials of the Coney’s famed fertility potion—certainly it would make sense for Queen Laika at Clearwine to obtain some for the vineyards and thus send the player characters, an Ernalda priestess going to help with the birth of the local priestess, the Coneys wanting to hire mercenaries, the innkeeper at nearby Stone Cross wanting someone to find his pot boy who has gone missing, and so on. There is plenty of flexibility in the set-up although the strongest would be to link to the Colymar campaign.

When the player characters arrive in Chasteberry Hollow, there is a standoff between the Coneys and Leporids. That is likely to change with their arrival, but although there is a plot which will play out with their arrival, there is still plenty of room for player characters to undertake whatever action they want to resolve the situation. As written there are definitely villains to the piece, but neither side is totally blameless for the situation.

Besides describing the situation in Chasteberry Hollow and Chasteberry Hollow itself, This Fertile Ground details some ten or so NPCs from each side, possible outcomes for the scenario, and presents two new types of Beast Men, the Coneys and the Leporids. These can be created as NPCs or player characters.

Surprisingly, although some of the NPCs have the Jump Rune Spell, none of them have the Jump skill. This seems an odd omission since they are described as leaping in and out of combat.

Is it worth your time?
Yes. This Fertile Ground presents opportunities for both roleplaying and combat with a standoff that nicely brings two opposing Runes into conflict and gives room aplenty for the player characters to resolve that standoff. If the player characters include an Ernalda priestess, then this is a good scenario for her to be involved in. The scenario is also easy to add to the Colymar campaign.

No. If your campaign is not set anywhere near Beast Valley and perhaps you have an issue with leporine Beast Men, then This Fertile Ground is not for you.

Maybe. This Fertile Ground can be run as scenario encountered whilst the player characters are travelling, but how useful it is depends on how far they have come and where they are going, and it does not make the best use of the given plot hooks.