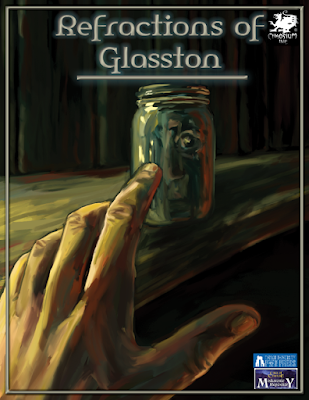 Refractions of Glasston: A 1920s horror scenario tempered in northern Indiana is a scenario for Call of Cthulhu, Seventh Edition with an origins very different to those of the submissions usually submitted to the Miskatonic Repository. Instead of being submitted by an amateur or professional author, it is the result of a creative collaboration between the Professional Writing major at Taylor University, Upland IN and Chaosium, Inc. The creators are all students at Taylor University and this is their first foray into writing for the roleplaying game hobby, aided and advised by Chaosium, Inc.’s editorial team. If the result lacks a certain polish, then it should be borne in mind that the scenario was produced as a course assignment in a single semester by a group whose members were all new to Call of Cthulhu before they started. Given all that, Refractions of Glasston serves up a (mason) jarful of rural noir and body horror with a degree of transparency.

Refractions of Glasston takes place in rural Indiana, where the fortunes of a once-failing glassware manufacturer has taken an unexpected upswing and turned a small town into a boom town! Elias Taylor Winters, the CEO of TWJ Co., has discovered a means of manufacturing toughened glass and is about to launch a new line of unbreakable mason jars. Yet even as the townsfolk put all of their efforts into supporting the factory which has brought them newfound prosperity, there are hints that all is not well in Glasston. The townsfolk are reluctant to talk, if not close-lipped, there is a wariness of strangers which all but verges on paranoia, and there are rumours of sickness amongst the factory workers. Just what is Winters’ new glass-making process? Is there any truth to the rumours of sickness and who the men in black who work for TWJ Co.’s CEO?

The core of the scenario involves investigation in and around the town, trying to discern just what the townsfolk and ultimately, the factory, are hiding. There are not too many places to investigate, but they are decently detailed with several NPCs for the investigators to interact with. Eventually though, their nosiness will attract the attention of the authorities and probably the all too influential TWJ Co. The likelihood of this is tracked on a Suspicion Tracker, to the point where the company reacts and the scenario transitions onto the next act, with subsequent events likely to drive the investigators into confronting the menace behind it—a minor ancient ‘god’ who will be refreshingly new to veteran players of Call of Cthulhu.

The authors also nicely serve up a history of Indiana, coming up to date with the effects of Prohibition, as well as adding elements of the state’s local mythos and folklore, suggesting how they might be developed further. This gives the scenario some solid context and so lays the groundwork for events to come whilst the investigators in Glasston.

The scenario comes with seven pre-generated investigators. They include a journalist, private eye, investor, nurse, moonshiner, factory worker, and pastor. They nicely reflect a range of origins, backgrounds, and ages. Some of them do have hooks which pull them into the events of Refractions of Glasston, but these hooks could have been more strongly highlighted and perhaps supported with advice for the Keeper on how the NPCs they are connected to in the town will react to them. That said, this should not be an issue for an experienced Keeper and her players. Rounding out the set of seven is advice on integrating existing investigators into the scenario. This is useful, but perhaps could have been placed at the start of the scenario rather than the end.

Physically, Refractions of Glasston is a forty-eight page, 7.68 Mb, full-colour PDF. Behind the nicely done cover, the scenario is neatly laid out with a mix of full colour artwork and rough pencils. Some of the boxed out text is difficult to identify though, and the single map is plain if serviceable. The editing could have been tighter in places, but it is fair to say that the production values are decent enough.

In terms of production values, Refractions of Glasston could have benefited from more maps, including a larger one of the town and its immediate environs and then one of the factory. That said, a Keeper should be able to draw these maps from the descriptions given if necessary. In terms of the plot, one of the NPCs is not quite as strongly used as he could have been considering what he knows, both about what is going in the factory and about the Mythos in general, and that he is a probable source of information about both for the investigators. Another issue is that one of the other NPCs feels anachronistic, though less so if the scenario is updated to the modern day (which would also have the advantage of making the local folklore easier to use).

There is no denying that Refractions of Glasston is not as smooth the substance at the heart of its horror, but it should not be forgotten that this is a first entry into the roleplaying hobby. So the members of the team behind the scenario are new to the writing, editing, and development process involved—just as they were new to Call of Cthulhu before they started. This does not and should not detract from the scenario, but what it does mean is that the Keeper will need to spend a little more time in preparing Refractions of Glasston than she might with a more polished title. In fact, it is fair to say that with more development—though not much more—Refractions of Glasston would be suitable for print in an anthology.

At its core, Refractions of Glasston is a good mix of background and plot, with some nicely creepy—and well thought out—aspects to the body horror that plagues the town. Overall, Refractions of Glasston: A 1920s horror scenario tempered in northern Indiana a solid, commendable first foray into writing for roleplaying games and for Call of Cthulhu.
Posted by pookie at 18:00