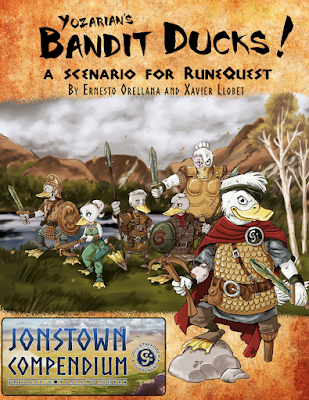 What is it?
Yozarian’s Bandit Ducks! A RuneQuest Glorantha scenario for 3-5 players is a short one-shot with pre-generated players character Ducks.

Yozarian’s Bandit Ducks! is well presented, nicely illustrated in a cartoonish style, and the maps are good.

Where is it set?
Yossarian’s Duck Bandits! is set in Sartar in Dragon Pass. The default location is 32 km north of Apple Lane in the lands of the Dinacoli, but it can be shifted to any location on the fringes between civilised lands and the wilderness.

Who do you play?
Duck bandits. Or rather, Ducks who through misfortune and circumstance have turned to a life of banditry. Five pre-generated Ducks are included ready to play. They consist of two Odayla-worshipping Hunter brothers, an Uleria-worshipping ex-courtesan, a Humakt initiate, and an Orlanth initiate.

What do you get?
Yossarian’s Duck Bandits! is a tragi-comic affair about five Ducks who have been forced to turn to a life of crime and are about to commit their first act of banditry. This does not go quite as well as planned—for mostly tragic, comic reasons—but the Ducks do learn the whereabouts of even greater treasure. Unfortunately that involves a trek up a mountain and down again, a tight squeeze, some hungry, hungry trolls, and a ‘river rapids ride’ with Ducks!

Yossarian’s Duck Bandits! is in part intended to be played for comedy, played out against a very big threat, but there is a lot of flavour and nuance to the scenario which stems in part from the interplay of the pre-generated Ducks and their relationships. This should drive the events of the scenario as much as its fairly simple plot, and should also provide plenty of opportunity for some good roleplaying too. Although the outcome of the scenario is not set in stone, there is a good chance that the player characters will come out of it heroes—after all, they are bandits more by circumstance rather than choice—and the authors do provide several adventure seeds should the Game Master want to continue with the further adventures of Yossarian’s Duck Bandits.

Yossarian’s Duck Bandits! is about the right length to be run as a convention scenario and so could be run in a four-hour session. No advice is given to that end, but an experienced convention Game Master should have no issues with running the scenario.

Is it worth your time?
Yes. Yozarian’s Bandit Ducks! A RuneQuest Glorantha scenario for 3-5 players is a fun, exciting affair, easy to run as a one shot (or convention) scenario which demonstrates one of the odder aspects of Glorantha. Duck fans will love this, as will fans of the original ‘The Money Tree’ scenario, and they will also want a sequel,which the scenario deserves.

Maybe. Yozarian’s Bandit Ducks! A RuneQuest Glorantha scenario for 3-5 players involves Ducks and some people find Ducks silly, but there is plenty of tragedy in the scenario to counterpoint the silliness—and at the very least, it is just a one-shot.