1974 is an important year for the gaming hobby. It is the year that Dungeons & Dragons was introduced, the original RPG from which all other RPGs would ultimately be derived and the original RPG from which so many computer games would draw for their inspiration. It is fitting that the current owner of the game, Wizards of the Coast, released the new version, Dungeons & Dragons, Fifth Edition, in the year of the game’s fortieth anniversary. To celebrate this, Reviews from R’lyeh will be running a series of reviews from the hobby’s anniversary years, thus there will be reviews from 1974, from 1984, from 1994, and from 2004—the thirtieth, twentieth, and tenth anniversaries of the titles—and so on, as the anniversaries come up. These will be retrospectives, in each case an opportunity to re-appraise interesting titles and true classics decades on from the year of their original release.

From the off, the d20 System allowed publishers to ride the wave of popularity that was Dungeons & Dragons, Third Edition, and that started at Gen Con 2000 with adventures from publishers such as Atlas Games. Better known for roleplaying games such as Over the Edge and Feng Shui: Action Movie Roleplaying, Atlas Games would launch its Penumbra line of d20 System supplements with one of the very first adventures for Dungeons & Dragons, Third Edition—Three Days to Kill. What is notable about Three Days to Kill—beyond the fact that it was the first scenario published for Dungeons & Dragons, Third Edition, it that it was written by John Tynes, then better known as co-designer of Unknown Armies and the Delta Green setting for Call of Cthulhu. So what you had was a horror writer designing a fantasy adventure and that is evident in certain ‘Grim Dark’ tone to Three Days to Kill. The other notable fact about Three Days to Kill is that it sees me as a reviewer returning to where I started, having reviewed the scenario in 2001 at RPG.net. Of course this will be a more likely occurrence as we proceed into the next decade, but this does not mean that such titles are not worth reviewing or revisiting. 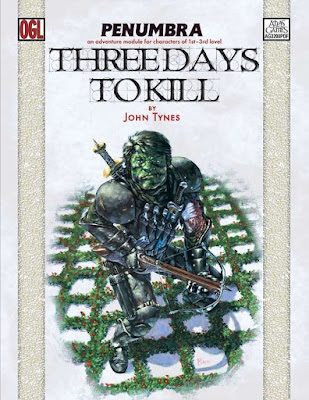 Designed for a party of player characters of First Level to Third Level, Three Days to Kill takes place in what is intended to be an isolated area in the Dungeon Master’s campaign. This is in and around the valley known as the Deeps, at the heart of which is Deeptown, a major stop along a long east-west trade route through a range of  mountains. The town’s primary interest is trade and supporting the constant movement of caravans which travel east and west along the trade road. The town council—as well as the Trade Circle, made up of Deeptown’s most important businessmen and which has a strong, if subtle grip on the town—are particularly concerned about maintaining the flow of goods and money through Deeptown. This includes accepting the presence of religions and faiths which would not be accepted elsewhere, such as the Sect of Sixty, which seeks to deceive and seduce through pleasure and hedonism. As long as no one temple or faith upsets the balance of trade through the town, they are allowed to continue ministering to their flocks. Upset or threaten that balance and the Town Council will see to it that the priests are driven from the town, the faith’s temple burned to the ground, and the faith banned in Deep Town. That is until the faith can renegotiate terms more favourable to the Town Council for the return of their priests to Deep Town.

Whilst there is an obvious balance being maintained in Deeptown, there is a more subtle counterpart beyond the earthen ramparts of the town. This is not maintained by the town council or the Trade Circle, but by a half dozen bandit ‘lords’ who prey upon the merchant caravans travelling in and out of Deeptown and the Deeps. They have learned to carry out well-executed assaults on the richer caravans, perhaps killing a few guards, but leaving travellers and merchants alive, in the case of the latter, perhaps to target them again on the way out of the valley or on a return journey. What they avoid is committing massacres. That only attracts the attention of the authorities in Deeptown and increases the likelihood of their retaliating.

As Three Days to Kill opens, neither of the top two bandit lords are happy with this balance of power. One has learned that his rival is seeking an alliance with outsiders to crush his forces and so take control of bandit operations in the valley. In order to counter this, he plans to hire a team of outside thugs, equip them, and have them assault the location where the rival is meeting his potential new allies. Not necessarily to kill, but to disrupt the meeting and in the process, undermine the alliance before it gets off the ground. Enter the player characters…

The player characters arrive in Deeptown almost like everyone else—accompanying or guarding a merchant caravan. They arrive just in time for the Festival of Plenty, an annual event put on by the Sect of Sixty. This is a pageant of wine, song, and ribald debauchery culminating in a performance of Passion of Arimbo, a popular folk tale about a farmer who follows a jolly devil into the rings of Hell. The player characters are free to participate in the festival or even work it as guards, and the scenario caters for either option. There is opportunity here for plenty of roleplaying for both the Dungeon Master and her players, enough for a session before the main plot comes into play. Alternatively, if the Dungeon Master wanted to run a shorter session, she could ignore the Festival of Plenty entirely and cut to the main plot. That though would be to miss a certain plot payoff if any of the player characters do get involved in the event’s debauchery, especially given who and what the Sect of Sixty actually worship.

The main plot to Three Days to Kill sees the player characters armed and equipped by one bandit lord to strike at another. The arming and equipping includes magical items as well as mundane ones, but the magical ones are very specific and for a specific purpose, all to be used during the assault. They consist of a Wand of Fireballs—with a single charge; an Orb of Sight—which provides low light, telescopic, and even X-ray vision; twenty Flare Pebbles; and a Sleep Arrow. A Wand of Fireballs with one charge rather than a Fireball Scroll because it models a rocket launcher; the Orb of Sight because it models low-light or IR Goggles; the Flare Pebbles because they model flashbang grenades; and the Sleep Arrow because it models a stun grenade or knockout dart. What this all models and what the climax of Three Days to Kill models—as it clearly states—is a Tom Clancy-style special ops mission in a fantasy setting. So the player characters will need to reconnoitre the villa where the meeting is taking place and plan how to carry out the assault. To that end the author includes advice on the strategies the player characters can use and their players can make skill rolls for their preparations as necessary.

Only on the journey to the villa will the player characters begin to learn that there is something amiss. There are others, priests of the Temple of the Holy Order from Deeptown, who were aware of the meeting between the bandit lord and his prospective allies—and they paid for it with their lives. However, this should not stop the party from continuing with its mission. And ideally, this mission should go as clockwork up until the point where it does not and all hell breaks loose—literally. For the truth of the matter is that the bandit lord is seeking an alliance with diabalists and when the player characters attack, they bring allies of their own. Ones that the player characters will not be expecting and are probably ill-equipped to deal with. And then there is the issue of just who killed the priests of the Temple of the Holy Order from Deeptown…

As written, Three Days to Kill consists of a simple background and a straightforward plot—at least as far as the player characters are concerned. In fact, the plot is quite complex and this will come out in play as it complications will disrupt the plans of the player characters, the bandit lord, and the Sect of Sixty. The background is detailed, covering the Deeptown and some of the surrounding Deeps valley, but is not specific, which has a couple of ramifications. One ramification is that Three Days to Kill is easily adapted to the setting of the Dungeon Master’s choice, or indeed the fantasy roleplaying game of the Game Master’s choice. This is because the author leaves plenty of scope for the Dungeon Master to supply that flavour, whether that is renaming the Sect of Sixty and the Temple of the Holy Order or relocating Deeptown to fit her own campaign world. The other ramification is that beyond a certain grim tone to the situation and plot, Three Days to Kill is lacking in flavour.

For the players, Three Days to Kill presents an interesting challenge, especially with low Level player characters. The instinct for players and thus their characters is to kill, after all, it goes to the heart of dungeoneering and thus Dungeons & Dragons. Now should the player characters decide not to obey their instructions and rush in, events are likely to backfire on them. Once they attack and events escalate, should they stay and fight, then again events are likely to backfire on them. Three Days to Kill is very much a get in, perform the strike, and get out again mission, just like the special forces missions it is modelling.

Physically, Three Days to Kill is well written and nicely illustrated. The artwork of  Toren Atkinson, Scott Reeves, and David White gives the book a gritty, grainy feel which hints at the dirty nature of the situation in and around Deeptown. Yet the layout does feel cramped and the maps—obviously done using Pro Fantasy Software’s Campaign Cartographer 2—do not match that style. Some of them do feel too clean and unfussy in comparison to the artwork and sometimes feel too big for what they are depicting. The rest of the maps are more detailed and convey more information.

At the time of its release, Three Days to Kill, looked rather sparse in comparison to other adventures. After all, there is not a lot of plot and what there is takes up barely a third of the scenario. Nor is there much in the way of flavour beyond the grim, dark tone. And yet there is both adaptability and utility in Three Days to Kill, it is easier to use because of it, and not only is both plot and assault on the summit well-handled, they are supported with further plot hooks and consequences which make the setting of Deeptown and the Deeps  easier to add to a campaign. Although Three Days to Kill might be more memorable for being the first scenario published for use with Dungeons & Dragons, Third Edition, than for its adventure, it does mean that adventure is not handily serviceable.

John Tynes was kind enough to respond to my review when I tagged him on Twitter. He gave his recollections about how the scenario came about and thoughts about it since.

Reviews from R’lyeh thoughtfully reviews my #DnD adventure Three Days to Kill, the very first one published for 3rd Edition under the OGL twenty years ago this summer.