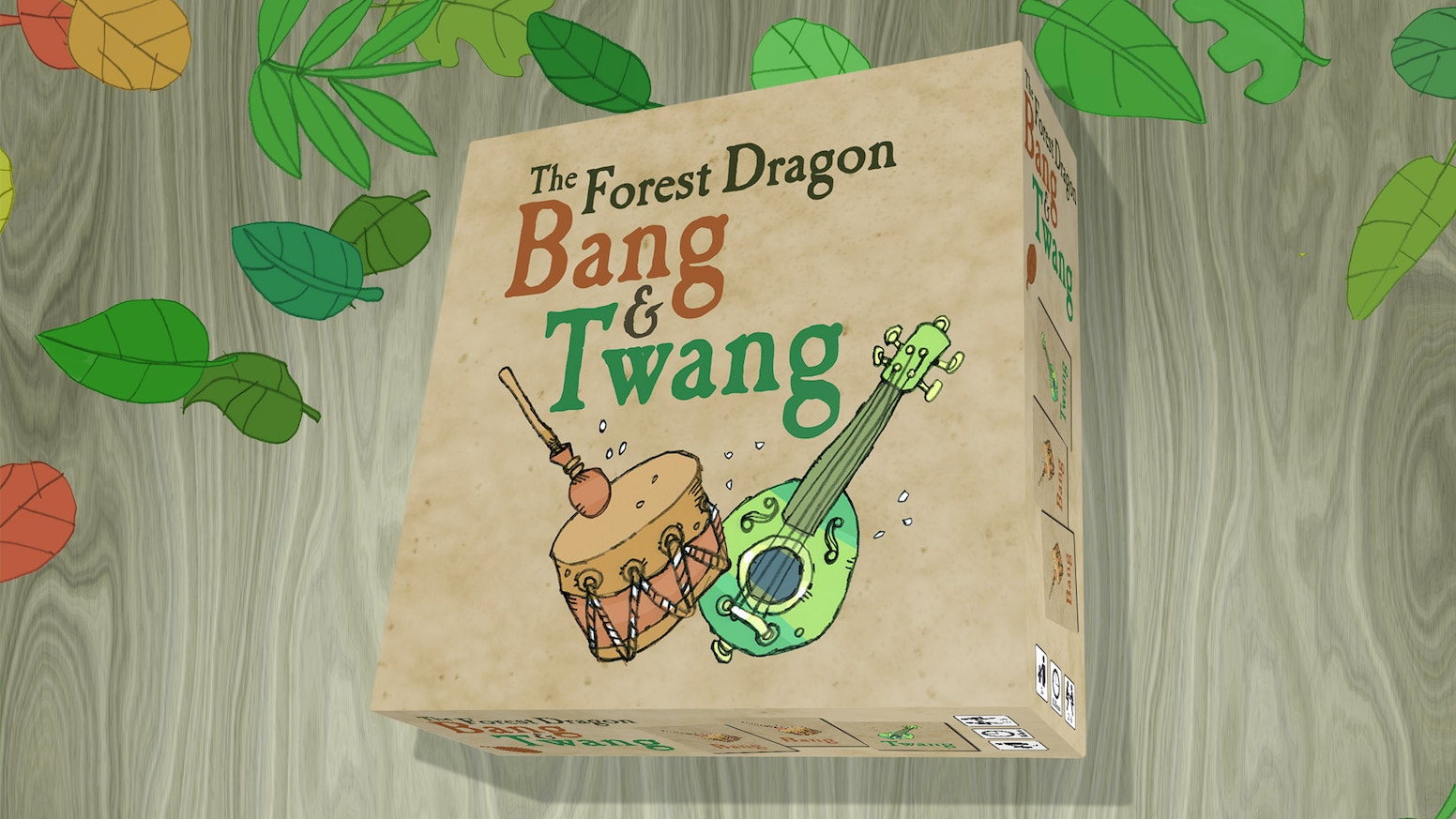 In 2017, Jon Hodgson, Ben Hodgson, and Rory Hodgson published The Forest Dragon: A Card Adventure Game, a simple, fantasy-themed push-your-luck style card game. Despite its simplicity, it enabled players to tell tales of forest exploration and proved to be a delightfully charming filler. In 2018, the young and old followed it up with a second game, not quite as simple, but still set in the same world as The Forest Dragon and a good little filler. This is a second game is The Forest Dragon: Bang & Twang, a game of pattern matching and tune twiddling with take that elements in which musicians gather at crossroads and campfires throughout the forest, get out their instruments, tune them up, and not only play, but play to out play everyone against a tune which is constantly changing!

Designed to be played by between two and six players, aged eight and over, Bang & Twang can be played in just ten minutes. Published following a successful Kickstarter campaign, it consists of sixty-seven cards divided into three types. The first are the ‘Bang’ and ‘Twang’ cards. These are double-sided ‘Riff Cards’ which have ‘Bang’ on one side and ‘Twang’ on the other along with illustrations of their instruments. They form the Riff which players are trying to match with the sixteen Sequence cards and will constantly be flipped and changing place in the sequence. Each Sequence Card displays a sequence of the ‘Bang’ and ‘Twang’ cards, which if a player can match with a sequence of the Riff cards, will award him the Victory Points on the Sequence Card. The third type of card is the Tune Card. They come in sets of eight, there being eight sets, each of a different colour in the game. Each set of Tune Cards does something different. So the green Tune Cards let the players steal Sequence Cards from each other; the red Tune Cards let players flip and switch the Riff Cards; and the yellow Tune Cards lets players interrupt each other.

Play continues like this until the deck of cards runs out. The player with the highest score wins and, well, that is that. Bang & Twang is simple. In fact simple enough for younger players to pick up and play with older players, but possibly too simple for more experienced players. So it works better as a family game. And whilst the different types of Tune Cards do add some variety in terms of replay value, but each set is too one note to replay too many times. One option here is to mix and match the Tune Cards, perhaps two sets at a time? Certainly there are not enough Sequence Cards to mix them all in, which might have made for more varied play.
Physically, The Forest Dragon: Bang & Twang is bright and breezy, illustrated in the same style as The Forest Dragon. So very much like the illustrations of children’s storybooks. And that is charming. The rules themselves do feel as if they are written for adults rather than the younger age range the game is designed for, so for younger players, an adult or older player may want to supervise or teach the game.
The Forest Dragon: Bang & Twang is not without its charms—though nowhere as many as The Forest Dragon: A Card Adventure Game—but it is probably too light for hobbyist gamers to play too many times. Ultimately, The Forest Dragon: Bang & Twang is a decent family filler.
Posted by pookie at 12:00