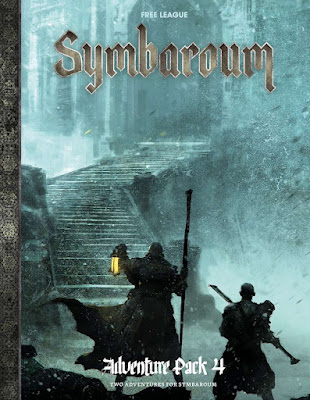 Adventure Pack 4 is the latest in series of ongoing scenario duologies for Symbaroum, the near-Dark Ages fantasy roleplaying game from Swedish publisher, Free League Publishing. From The Copper Crown to Adventure Pack 3, these duologies provide scenarios which place in and around the events of the Chronicle of the Throne of Thorns campaign, but which are standalone and are so easier to add to a Game Master’s own campaign.  Adventure Pack 4 itself presents two scenarios which highlight the internal strife and factional rivalry which runs through the young kingdom of Ambria. ‘Call of the Dark’ takes the Player Characters south and back into the northern territories on the very edge of the Lost Land of Alberetor in the company of a lowborn noble who is looking to recover proof as to the status of her family, whilst ‘Retribution’ begins with a hunt for a missing person in the city of Kurun before dropping the Player Characters into a conspiracy to antagonise relationships between Ambria and the Barbarian Clans.

Both of the scenarios in Adventure Pack 4 make use of content from the Advanced Player’s Guide and are designed for Player Characters between the levels of Experienced and Veteran, roughly one hundred Experience Points. Each consists of a three-act affair, plus a thorough introduction and timeline which explains what is going on and how to get the Player Characters involved. Each should take several sessions to play through and comes richly appointed with decent maps, some nice handouts, and not just their own background, but details that also add to the wider world of Symbaroum. Given their nature and setting, neither of these scenarios is suited to beginning characters or players, and both the Game Master and her players with some experience of the mechanics and setting will get the most enjoyment from them.

‘Call of the Dark’ highlights the precarious existence of some of the minor noble houses in Ambria with limited land to hold as fiefdoms and in some cases, the inability to prove their right to be on the Nobility Register. In most cases, this is because such records were left behind or lost in the flight from Alberetor. House Sarli is one such noble house and in order to prove its rightful status, mounts an expedition to its ancestral lands back in Alberetor. The Player Characters are hired to help with the expedition, and in joining the expedition, ‘Call of the Dark’ will see them returning back to the site of their and their players’ first adventures in Symbaroum with ‘The Promised Land’. Thus they find themselves at camp just south of the Titans, the mountain range which separates Ambria from Alberetor. Here though, their aim is not to go north into the safety of a kingdom untouched by blight, but south into a land blighted by The Great War with the lords of the dead. Fortunately, their destination lies in the very north of the fallen kingdom, on the edge of the Blight, though this does not mean that the Player Characters will necessarily escape its corruptive influence…

Setting out from the Cliff of Korinda, the refugee camp in the southern foothills of the Titans, the expedition skirt the edge of the mountains and search the remains of the fiefdom for the necessary proof. In the process they will uncover family secrets, horrors from the past, and secrets which threaten to undermine current religious orthodoxy in Ambria—and beyond. The refugee camp is nicely detailed, as is each of the various locations within the House Sarli fiefdom. Throughout there is a strong sense of loss, desolation, and abandonment, whether that is in the once thriving, but now abandoned buildings in the fiefdom or the dreary state of the few remaining occupants of the region. Although the expedition, and thus the Player Characters, are free to explore the Sarli lands, there are several locations their employer wants to visit, so the likelihood is that they will do them in the order as written. This is no bad thing, since it both builds the story whilst engaging the Player Characters in discrete encounters, whether that is with a garrison of undead soldiers still driven to perform their duties in life despite their nature, a nasty monster hunting underground, and more. Although its plot is quite simple on the surface, there is actually quite a bit going on behind its scenes, and the Game Master will need to bring that out as play progresses for her players to get the most out of what is a very enjoyable adventure.

‘Call of the Dark’ gives the Player Characters the opportunity to do something different—that is, visit old Alberetor, if only the very outskirts. For two of Symbaroum’s character types, it also provides opportunities to explore their backgrounds. One is the Noble, who could actually replace the representative of House Sarli and thus make the adventure that much more personal. The other is a theurg of the sun god, Prios, who is likely to have his beliefs tested—physically and theologically! Overall, this is a thoroughly enjoyable if mournful adventure with lots of nods to previous adventures which is best run later in a campaign.

The second scenario, ‘Retribution’, takes place in Ambria, specifically the city of Kurun, the seat of the Duke of Berakka located to the west of Thistle Hold, the town from which many a treasure hunter’s fortune or failure has been launched into the Davokar Forest. It is a classic tale of unrequited and misplaced love which festers from resentment into revenge and given that it is written for Symbaroum, that revenge is dark and bloody! Set across five hills divided by a river which makes Kurun an important shipping port, the city itself is described in some detail such that a Game Master could easily have her campaign revisit it, and in addition to detailing its factions and notable establishments, provides a trio of adventure seeds to support that.

Where the emphasis in ‘Call of the Dark’ is on exploration and interaction, the emphasis in ‘Retribution’ is on investigation and interaction. This is a classic investigative scenario as one clue leads to another and a missing persons case leads into another missing persons case, and then a much bigger story. The players will have to work hard with their roleplaying to discover what is going on as the investigation moves from the low-class, even criminal parts of Kurun to its upper echelons and back again, taking in a tribe of Goblin exiles on the make and an increasingly dangerous response to the Player Characters’ activities as they digger deeper and deeper into the mystery. Ultimately, they should discover what lies at the heart of the mystery, which can lead to a very different third act. It all depends on what the Player Characters decide to do with the information they have discovered. Simply asking for help or leaving it for the authorities to deal with and the events play out without the Player Characters’ intervention. This is not only disastrous for all concerned as the plot the Player Characters were investigating comes to fruition, but it also truncates the scenario by a third. Simply, the players and their characters very much have to be proactive and certainly self-motivated to want to enter the third act, but if they do, the Player Characters have a desperate journey across country to make to stop the villains’ plans coming to fruition, all the while harried by the enemies they have made along the way. If they are in time, the Player Characters have a chance to save the day, if not, they may be able to stop their enemies’ plans from progressing any further, but the damage will most certainly have been done. The third act is then, a race against time, decently handled with sufficient detail to keep up both pace and flavour. Even if the Player Characters do race across the countryside they may not be necessarily in time and disaster can still ensue—so there is a higher chance of player failure with the scenario. Nevertheless, ‘Retribution’ does a fine job of taking its theme of unrequited love and giving a very dark Symbaroum twist and ultimately injecting it with the Blight and its corruptive influence.

In addition to the scenarios, Adventure Pack 4 is rounded out with an appendix of new rules, editions, artefacts, and more. The new rules cover ‘The Dangers of the Darkened Land’, the continuing effect of the corruption which has blackened Alberetor, ‘Forced Ride’, which handles continued horse rides over long distances in as short a time as possible, ‘Sleep Deprivation’, and more. Many of these rules, such as those for ‘Forced Ride’ or the ‘Bushcraft’ Ability, either replace or expand earlier rules, and most of them feature in one or the other of the two scenarios. Lastly, there are four new artefacts, and five handouts and nine maps for the players, all of the latter unnumbered.

Physically, Adventure Pack 4 is as well presented as you would expect for a Symbaroum supplement, done in full colour with atmospheric artwork and excellent maps. The handouts for the players are also good, though it would have been useful if the NPC thumbnails had been reproduced for player presentation. Similarly, despite the relative slimness of the book, an index would have been useful too.

Both of the scenarios in Adventure Pack 4 highlight that there is a lot going on elsewhere in Ambria and beyond than the continuing story of ‘The Chronicle of the Throne of Thorns’. However, both scenarios come with a lot of backstory and background which the Player Characters are unlikely to really uncover in their entirety, but which the Game Master will still need to digest and present to them should they need to know immediately, or they decide to dig into that background as much as they are able. This is especially the case with ‘Call of the Dark’, whether that is politics back in Ambria or in countries elsewhere on the continent which are barely touched upon by the Symbaroum line. There is potential for the Player Characters to explore some of this, but that would require no little development upon the part of the Game Master. In the case of ‘Call of the Dark’ this would work well if the scenario’s main NPC has been replaced by a Player Character. Adventure Pack 4 is worth coming back to once both scenarios have been played though, especially the scenario ‘Retribution’ as the consequences of its events—whether the Player Characters succeed or not, are likely to have greater ramifications for a campaign (that is, unless the Player Character replaces the NPC in ‘Call of the Dark’). The presentation of Kurun in ‘Retribution’ makes it as potentially as interesting a location as Thistle Hold nearby and its inclusion adds more to the setting.

For  all the complexities of their respective backgrounds, the two adventures in Adventure Pack 4 are not necessarily as complex to run. In the case of ‘Call of the Dark’ there is something joyously simple to the plot of its adventure—at least on the surface, and ‘Retribution’ feels like a classic Film Noir plot done for Symbaroum. In terms of theme and setting, the scenarios in Adventure Pack 4 are very nicely done and will be a lot of fun to run and play later in a campaign.