The FATE of Quiet 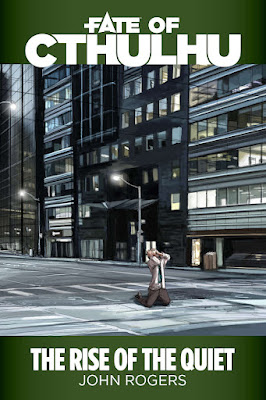 FATE of Cthulhu added two elements to Lovecraftian investigative roleplaying—time travel and foreknowledge. Published by Evil Hat Games, the 2020 horror roleplaying game was built around campaign frameworks that cast the Player Characters as survivors in a post-apocalyptic future thirty years into the future, the apocalypse itself involving various aspects and entities of the Mythos. Not only as survivors though, because having entered into a pact with the Old One, Yog-Sothoth, they have unlocked the secret of time travel and come back to the present. They have come back aware of the steps along the way which brought about the apocalypse and they come back ready to fight it. This though is not a fight against the Cthulhu Mythos in general, but rather a single Old One and its cultists, and each thwarting of an Old One is a self-contained campaign in its own right, in which no other element of the Mythos appears.

The five campaigns, or timelines, presented in FATE of Cthulhu in turn have the Investigators facing Cthulhu, Dagon, Shub-Nigggurath, Nyarlathotep, and the King in Yellow. Each consists of five events, the last of which is always the rise of the Old One itself. The events represent the roadmap to that last apocalyptic confrontation, and can each be further broken down into four event catalysts which can be people, places, foes, and things. The significance of these events are represented by a die face, that is either a bank, a ‘–’, or a ‘+’. These start out with two blanks and two ‘–’, the aim of the players and their investigators being to try to prevent their being too many, if any ‘–’ symbols in play and ideally to flip them from ‘–’ to blank and from blank to ‘+’. Ultimately the more ‘+’ there are, the more positive the ripple will be back down the timeline and the more of a chance the investigators have to defeat or prevent the rise of the Old One. Conversely, too many ‘–’ and the known timeline will play out as follows and the less likely the chance the investigators have in stopping the Old One.

Each of the five timelines comes with details of what a time traveller from 2050 would know about it, more detail for the Game Master with a breakdown of the events and their Aspects, Stunts, Mythos creatures, and NPCs. Most of these can serve as useful inspiration for the Game Master as well as the advice given on running FATE of Cthulhu and her creating her own timelines. After all, there are numerous Mythos entities presenting the prospective Game Master ready to create her own timeline with a variety of different aspects, purviews, and even degrees of power, but nevertheless capable of bringing about an apocalypse. However, Evil Hat Games has already begun to do that with its own series of timelines, each again dealing with a different Mythos entity and a different downfall for mankind. The first of these is The Rise of Yig, followed by The Rise of the Basilisk, which although it retained a sense of Cosmic Horror, it definitely moved away from the Cthulhu Mythos. A trend which is continued with the third of the ‘Darkest Timeline’ supplements.

The future of The Rise of The Quiet is one of technological advances and continuing climate change, radical distrust of the news, clashes over limited resources, and expanded space exploration—and then The Quiet. People began reporting incidences of lost time, others seeing the sufferers standing or sitting completely still, as if deep in thought. Then they began to walk whilst in these states, safely moving first to the middle of crowds and then coming together in groups. First in their Quiet state, then socialising out of the Quiet state, no matter their origins or social status. At first mistrusted, the Quiet are then filmed running into burning buildings, strangers into their homes, and soldiers in conflict zones refusing to kill the enemy. In each case willingly offering compassion rather than conflict. The Quiet come to be seen as better examples of humanity, and perhaps a source of hope for its future. Then in late 2030 everyone begins dying from a disease which kills within twenty-four hours and whose cause cannot be determined… That is except for The Quiet. Just what is The Quiet and why is protecting the sufferers from this new disease?

What happened has its origins in 2020 when the Chinese military stole samples of newly developed nanotechnology, and then developed and weaponised them. That newly developed nanotechnology was what became known as The Quiet, which altered its sufferers’ cortexes and infected them with a sense of altruism. Not everyone could survive the infection though… China was not responsible for The Quiet, but it did have a counter—The Loud. This nanotechnology not only helped those infected withstand the effects of The Quiet, but instead of altering their cortex, caused them to undergo physical transformation, including unbreakable nanobot-infused bones, enhanced senses, transforming their skin into a non-Newtonian fluid surface capable of withstanding bullets, and enhancing their ability to micro-mirror nearby humans, evoking feelings of deep friendship and trust in bystanders. However, it is theorised that extended use of the abilities granted by ‘The Loud’ may turn the infected into an unstoppable killing machine.

In addition, time travel has been invented, but only back to one moment in early 2020. The Player Characters will be infected with The Loud, go back in time and if not stop the spread of The Quiet, then at least slow its spread whilst also ensuring that the knowledge necessary to combat it is retained for the future they come from. In other of the Darkest Timelines for FATE of Cthulhu, the Player Characters are being sent back in time to investigate certain events, typically four of them, which lead to the emergence of an Old One. The Rise of The Quiet forgoes that instead, being built around four ‘Swing Points’, nexus points that the Player Characters have the opportunity to alter and send ripples of causality forward into their future. The emphasis is on the alteration of these four ‘Swing Points’ rather than the stopping of them, and what this means is that the outcomes are likely to be conditional rather than absolute—there is no one happy outcome. The Player Characters are almost working towards a median outcome rather than a wholly positive one. They are at best stemming off the effects of The Quiet rather than locating a definitive cure.

As with events in other Darkest Timelines, the four Swing Points in The Rise of The Quiet are described in some detail and come complete with a number of NPCs which are given full write-ups. In turn the Swing Events focus on the origins of The Quiet nano-infection, which involves TED Talk giving techno-guru; the initial exposure of The Quiet, which takes place at an international airport in a spy free-for-all smackdown; a self-help group (or cult, it depends on who you are talking to) which tapped into the possibilities of The Quiet; and finding those believed to be immune to The Quiet, which sees the Player Characters going on the road in the wake of a terrible rock tour. There is a lot going on in each of these, much of which of course, will only become apparent as the Player Characters investigate.

Physically, Darkest Timeline: The Rise of The Quiet is cleanly presented. It is easy to read and the layout is tidy, though it needs an edit in places. The artwork is good also. The Rise of The Quiet does feel as if it is a story treatment, but that is no surprise given who its author is, John Rogers, the creator of the Leverage and The Librarians televisions series.

One issue that the publisher does address is that the fact that Darkest Timeline: The Rise of The Quiet involves both a pandemic and China, but notes that the timeline was written before the Corona virus outbreak and that it is not intended as a commentary upon the current situation in which society finds itself. Whilst China has a role to play in Darkest Timeline: The Rise of The Quiet it is not as the one to blame in the timeline and although the Player Characters are likely to encounter, if not confront, Chinese agents, as part of their efforts to save the future, China’s role in the situation is more nuanced than as simply the bad guy.

Darkest Timeline: The Rise of The Quiet substitutes the usual Old One in FATE of Cthulhu with a nanobot swarm which has infected mankind with a techno-virus. This has several consequences. The timeline involves multiple, all-too human enemies rather than a single alien entity beyond human comprehension and its attendant cultists, each with its own agenda. There is no eldritch and thus no spells involved, or indeed, the corruptive influence of the Mythos. Instead, the Player Characters are corrupted by the influence of The Loud and the alterations it will make to their bodies. All of this difference and there is one thing which Darkest Timeline: The Rise of The Quiet does not address what exactly the roles the Player Characters should take instead those traditional to more standard roleplaying games of Lovecraftian investigative horror.

Darkest Timeline: The Rise of The Quiet is a horror scenario, not a Mythos one, but still a horror scenario nonetheless. It presents as equally an existential threat, but leans heavily into the Science Fiction of the FATE of Cthulhu set-up with the addition of relatively low-level superpowers. In essence it combines elements of Twelve Monkeys with The Terminator, but with the Player Characters as the Terminators. This is played out against a framework which is shorter, more focused, and has a contemporary setting. Again, Darkest Timeline: The Rise of The Quiet showcases how FATE of Cthulhu is capable of doing existential horror without the Mythos and how far its can push its Science Fiction.