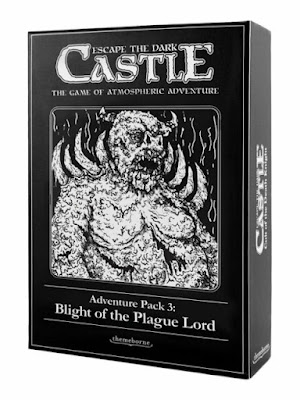 At its most basic, Adventure Pack 3 – Blight of the Plague Lord adds a whole new story and more challenges which extends the life of Escape the Dark Castle and means that players will it bring back to the table on a regular basis. It really only adds the one mechanic, ‘Plague’, and then thoroughly injects and infects it into the Chapter cards for the expansion, the result being grim, often grinding battle of survival against something that the escapees cannot see, but can see the effects of. When combined with the artwork, it is horridly thematic, adding to and enforcing the ghastly situation that the escapees find themselves in. However the strong theme and its mechanically deleterious effects upon the escapees is likely to clash with those of the other expansions and actually make their harder to play through because the Plague is constantly reducing an escapee’s chances of survival and there is not necessarily the balance between the effects of the Plague and the loss of Hit Points present in those expansions as there is in Adventure Pack 3 – Blight of the Plague Lord.
Overall, Adventure Pack 3 – Blight of the Plague Lord adds an enjoyably grim and grimey story to Escape the Dark Castle: The Game of Atmospheric Adventure. So strong is its theme though, it is one perhaps best played as a standalone rather than mixed in with the other expansions.

—oOo—
Thenborne will be at UK Games Expo which will take place between July 30th and August 2nd, 2021 at Birmingham NEC. This is the world’s fourth largest gaming convention and the biggest in the United Kingdom.