Jonstown Jottings #45: Night in the Meadow and other Spirit Encounters 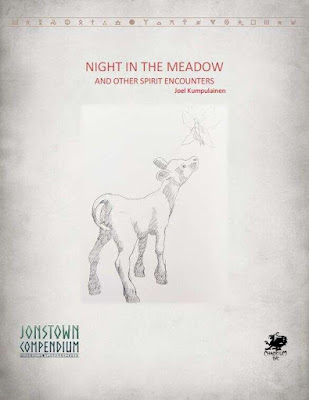 What is it?
Night in the Meadow and other Spirit Encounters is a trilogy of short encounters themed around herding for use with RuneQuest: Roleplaying in Glorantha.
It is a seventeen page, full colour, 1.98 MB PDF.
The layout is clean, but slightly untidy with artwork which is functional rather than attractive. It definitely needs another edit.
Where is it set?
Night in the Meadow is nominally set in the Blueberry clan of the Cinsina tribe, but can be set anywhere in Dragon Pass where herds of cattle are kept out overnight in the pastures.

Who do you play?
At least one Herder. In addition, an Assistant Shaman or Priestess will be useful, as will a Hunter or other Player Character with the Tracking skill. A Lhankor Mhy priest or scholar may find some of the background to one of the scenarios to be of interest. In addition, Player Characters with the Passions ‘Hate (Trolls)’ or ‘Hate (Telmori)’ will be challenged by the events of one or more of the encounters.

What do you need?
Night in the Meadow requires RuneQuest: Roleplaying in Glorantha and the Glorantha Bestiary.
What do you get?
Night in the Meadow and other Spirit Encounters presents a series of three encounters on the tribe’s herding pastures over the course of a season or two. Ideally, the encounters should not be run one after another, but as smaller adventures between longer scenarios. Each of the encounters is suited to smaller playing groups and could either be run as flashbacks or as part of campaigns involving Player Characters close to their initiations, for example, Six Seasons in Sartar or Valley of Plenty (although Night in the Meadow would require some adaptation to be run using HeroQuest: Glorantha or QuestWorlds).
The first of the encounters in Night in the Meadow is the eponymous ‘A Night in the Meadow’. The Player Characters and other herders are awoken with a startle and a shout, aware that something has happened, but not quite what. Eventually they will realise that one of the horses is acting oddly and making the rest of the animals skittish. This is a simple enough situation, even charming, which requires a little investigation and a bit of negotiation to solve and gives the Player Characters the opportunity to make good names for themselves.
‘Pieces of Genert’, the second encounter is much, much simpler, and more action-oriented and will probably result in some hunting and some combat. The herds have been harassed by hyenas of late and the Player Characters are called out to track down the pack and drive it off. There may be more to the situation of course, and even if they fail to find the pack’s den, it will return for what it sees as an easy meal. The encounter includes a nice link to Glorantha’s mythology and a lovely piece of treasure to be found as well. If there is an issue, it is the requirement for the Player Characters to require at least standard success results for thirty-six Tracking rolls! This is just too much, and the Game Master should simply reduce this to just six.
In the third and final encounter, ‘Brilliant Hunt’, the Player Characters discover that a calf is missing and after following the tracks, discover that it has been stolen by a band of Trollkin. What the Trollkin are doing out on the pastures is a good question, and the encounter raises even more interesting questions when the Trollkin accidentally discover a set of ruins. There is actually quite a lot going on in this encounter and there are several outcomes and consequences which the Player Characters will have to deal with, including negotiations with Trolls and Dragonewts, joining an ‘alien’ cult, and more. Consequently, the encounter is definitely the most sophisticated of the three.
Any one of these encounters could be played in a single session, perhaps two at the very most. They should require relatively little preparation, but they are too often written in a stream of consciousness fashion rather than informing the Game Master upfront as to what is going on. The various stats and NPC write-ups are generally clear though.
Is it worth your time?
Yes—Night in the Meadow and other Spirit Encounters presents three enjoyably simple and interesting encounters built around herding that are relatively easy to prepare at short notice.
No—Night in the Meadow and other Spirit Encounters is harder to run if the party does not include a Herder or an Assistant Shaman or Priestess, or both amongst its members and perhaps the playing group is too large for these encounters.
Maybe—Night in the Meadow and other Spirit Encounters involves messing about in fields when the Player Characters have better things or less parochial things to do, like preparing for the upcoming Hero Wars, but its encounters might serve as an interlude or two.
Posted by pookie at 12:00