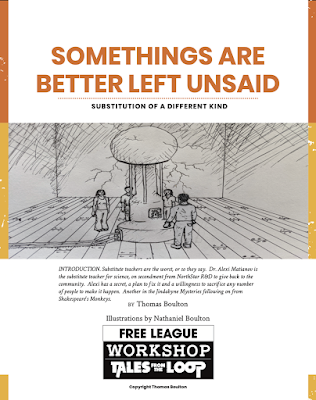 In comparison to Tales from the Loop, there is relatively little support for its sequel, Things from the Flood. Both share a setting in Mälaröarna, the islands of Lake Mälaren, east of Stockholm, first in the 1980s and then in 1990s, the site of the Facility for Research in High Energy Physics—or ‘The Loop’—the world’s largest particle accelerator, constructed and run by the government agency, Riksenergi. Both are settings drawn from Simon Stålenhag’s artwork, Tales from the Loop contrasting an almost pastoral idyll against a hi-tech world of the Loop, robots, and skies filled with ‘magnetrine vessels’, freighters and slow liners whose engines repel against the Earth’s magnetic field, an effect only possible in northern latitudes. In Things from the Flood, the pastoral idyll has been spoiled, the lands around the Loop spoiled by a hot, brown liquid bubbling up out of the ground, Riksenergi being shut down and the Loop being sold off, robots suffering from a strange cancer, and the resulting economic crisis would lead to depression, personality changes, divorces, gambling disorders, and more… Where Tales from the Loop is positive in tone and has a fascination with technology, Things from the Flood is darker and has a fear of technology.

Thankfully for fans of Things from the Flood—and other titles from Free League Publishing, there is the Free League Workshop. Much like the DM’s Guild for Dungeons & Dragons, this is a platform for creators to publish and distribute their own original content, which means that they also have a space to showcase their creativity and their inventiveness, to do something different, and perhaps even surprise us. So it is with Somethings are Better Left Unsaid.

Somethings are Better Left Unsaid is a scenario for Things from the Flood, and whilst it does involve things, it does not involve either floods, Loops, or even Sweden. It is still set in the 1990s though, but Australia, rather than Sweden, and the Teens are still teenagers. It is the second in a series of adventures—the first being Shakespeare’s Monkeys—involving the efforts of the research company, Northstar R&D, led by its founding CEO, Jeremy Longstaff, which wants to bring some of the technological and scientific benefits, in particular, the magic of magnetite, from the Loops in Sweden and Boulder City, Nevada, to the Southern Hemisphere. It is a short, one or two session scenario set in the lakeside town of Jindabyne, a small tourist resort in the Snowy Mountains of New South Wales, Australia.

Despite sharing the same location and being set in Australia, Somethings are Better Left Unsaid is a little different in comparison to Shakespeare’s Monkeys. In a way, it feels less Australian because it does not involve an intelligent creature a la the series, Skippy the Bush Kangaroo (which in Shakespeare’s Monkeys manages to feel simultaneously appropriate and inappropriate). However, because it forgoes this obvious potential for parody, it allows the authors to bring in something which is genuinely Australian and so brings colour into the scenario which was not present in Shakespeare’s Monkeys. This is Behind the News, a long-running news programme broadcast on Australia’s ABC TV and aimed at upper primary and lower secondary students to help them understand issues and events outside their own lives. Show the players an episode of this—especially those from the nineties and perhaps worked into scenes earlier in Shakespeare’s Monkeys and that would go towards adding colour to the four scenarios.

The other difference between the two scenarios is that Somethings are Better Left Unsaid brings the threat at its heart closer to home—or at least closer to school. The Teens of Jindabyne begin to have the weirder feelings than the norm—that they almost know what others are thinking and of floating just above their bodies as they fall asleep at night, just as radios keep squawking static and the sound of voices begging. Could these be connected? The one day at school, just as they are about to watch the latest episode of Behind the News, their science teacher, along with a fellow student,  faints in class. If they go to check on either of them in hospital the next day, they discover that the local doctors are both perplexed and worried, but a strange old man, accompanied by bodyguards no less, seems to be taking an interest in them. Things take a really weird turn the next day when the substitute the science teacher who is sick, Doctor Matianov, is actually the strange old man who was seen at the hospital the day before. This is not just weird, for it gets worse when it becomes obvious that Doctor Matianov is actually a terrible teacher! Just what is going on and just what does it have to do with Doctor Matianov? Is he really a teacher? Has he joined the staff at the school for reasons of his own?

Somethings are Better Left Unsaid is creepy and weird and ties into our fears—and those of the Teens—of conspiracies (Doctor Matianov is actually Russian), loss (in particular of important mentors and friends), and the supernatural (the weird voices heard over the radio, at the very least). It is darker in tone than the earlier Shakespeare’s Monkeys and is more focused and confined to just the school and the hospital, rather than being more open in terms of its play area. The result is that Somethings are Better Left Unsaid is shorter and more likely to played through in a single, intense session (though it could stretch to two). Similarly, just as with Shakespeare’s Monkeys, the decently explained plot is easily adapted to other settings—even back to Mälaröarna or Boulder City! There is however one issue with Somethings are Better Left Unsaid which it shared with Shakespeare’s Monkeys. It leaves the connections to Northstar R&D undeveloped and unexplored, and perhaps it would have been better for this scenario and the previous one to have dropped some hints or foreshadowed at the corporation’s involvement.

Physically, Somethings are Better Left Unsaid is a decently laid out document and follows the format for Things from the Flood. Some of the artwork is decent too, and the maps are nicely done. The darker turn of Somethings are Better Left Unsaid is not unwelcome scenario in what is another likeable enough affair that offers the chance to explore the world of Things from the Flood from a different perspective. It feels as if it is laying the foundation for something larger, but not telling the Game Master what it is yet, and that really needs to come through in the next scenarios to be released.