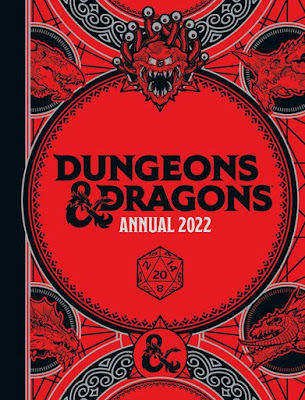 The Christmas Annual is a traditional thing—and all manner of things can receive a Christmas Annual. Those of our childhoods would have been tie-ins to the comic books we read, such as the Dandy or the Beano, or the television series that we enjoyed, for example, Doctor Who. Typically, here in the United Kingdom, they take the form of slim hardback books, full of extra stories and comic strips and puzzles and games, but annuals are found elsewhere too. In the USA, ongoing comic book series, like Batman or The X-Men, receive their own annuals, though these are simply longer stories or collections of stories rather than the combination of extra stories and comic strips and puzzles and games. In gaming, TSR, Inc.’s Dragon magazine received its own equivalent, the Dragon Annual, beginning in 1996, which would go from being a thick magazine to being a hardcover book of its own with the advent of Dungeons & Dragons, Fourth Edition. For the Dungeons & Dragons Annual 2022, the format is very much a British one—puzzles and games, yes, and all themed with the fantasy and mechanics of Dungeons & Dragons, along with content designed to get you into the world’s premier roleplaying game.

Published by Harper Collins Publishers, the Dungeons & Dragons Annual 2022 moves on from the Dungeons & Dragons Annual 2021. It is not so much an introduction to Dungeons & Dragons itself, but rather an introduction to Faerûn and the Forgotten Realms, the principal setting for the current iteration of the roleplaying game. The slim volume begins with the first of several entries in the ‘Peoples of the Realm’ series. This is ‘Exploring Elves’, which highlights the various different types of Elves to be found in the Forgotten Realms, noting their special skills and key Classes, as well as some background and some trivia. Included here are the Drow and the Eladrin as well as the High Elves and the Wood Elves. Also mentioned here are the various types of Gnomes, Dwarves, and Halflings, the latter with the comment, “Overlook these diminutive folk at your own risk!”, which the entry and the Dungeons & Dragons Annual 2022 promptly does by consigning all three peoples to a sidebar rather than their own entry in the ‘Peoples of the Realm’ series. It is continued with ‘Think Big’ which suggests with Goliaths, Firbolgs, Orcs, and more as other character options, refencing Volo’s Guide to Monsters and Xanathar’s Guide to Everything. ‘Plane-Touched’ does a similar thing with races such as the Tritons, Genasi, Tabaxi, and more.

The first of the two ‘Campaign Spotlight’ entries in the Dungeons & Dragons Annual 2022 is on Icewind Dale: Rime of the Frostmaiden, the 2020 campaign published by Wizards of the Coast. This covers the campaign’s key features—its entry points, secrets, new rules, locations, and of course, stats for ‘Three Kobolds in a Trenchcoat’. None of it in any detail, but enough to intrigue the reader. Further, this ‘Campaign Spotlight’ is supported by other articles in the annual. The first of the ‘Across Faerûn’ entries looks at Icewind Dale, which of course is the setting for the campaign, and provides more details such as typical monsters—snowy owlbears and frost giants being the most obvious, along with a gorgeous map of the region. The theme of Faerûn and Icewind Dale even continues in ‘Beyond the Tabletop’, the series which looks at Dungeons & Dragons beyond it being just a roleplaying game. The first of these gives attention to Dark Alliance, the Dungeons & Dragons computer in which the Drow Ranger, Drizzt Do’Urden leads his companions into Icewind Dale in search of the magical shard, the Crenshinibon. Drizzt Do’Urden himself is given the spotlight in the next two articles. First in ‘Heroes & Villains’ which introduces him, his companions, and enemies, and second, in ‘Talking D&D: R.A. Salvatore’, an interview with the author of The Crystal Shard and its many sequels which feature Drizzt Do’Urden. Of course, much of this will already be familiar to fans of Dungeons & Dragons—as is the case for the whole of the Dungeons & Dragons Annual 2022—but from the ‘Across Faerûn’ entry on Icewind Dale through the spotlight on Icewind Dale: Rime of the Frostmaiden to the spotlight on Drizzt Do’Urden and interview with his creator, there is a lovely sense of a theme or thread running through the initial handful of articles in Dungeons & Dragons Annual 2022 and it feels much more thought out.

Whilst ‘Explaining the Planes’ takes the reader beyond the Forgotten Realms to look at the Elemental Planes and the Outer Planes, the Dungeons & Dragons Annual 2022 quickly returns to ‘Across Faerûn’ and ‘The Feywild’ in particular. There is a connection between the two in that the Feywild is a reflection of the Prime Material Plane and also back to the ‘Exploring Elves’ article for Eladrin who come from the Feywild. However, ‘Beyond the Tabletop’ continues the journey away from the Elemental Planes and the Outer Planes by looking at the computer game, Baldur’s Gate III, which mentions Avernus, the first layer of the Nine Hells. The other connection to Baldur’s Gate is a two-page spread dedicated to Minsc (and Boo) in ‘Heroes & Villains’ (his counterpart in the annual, is the villain ‘Xanathar’, whilst if not the Forgotten Realms, but still in the annual, is ‘Vecna’), but the connected ‘Campaign Spotlight’ is Baldur’s Gate: Descent into Avernus. This does as good a job as that devoted to Icewind Dale: Rime of the Frostmaiden.

The ‘Bestiary’ first highlights ‘Common Foes’, so the lowly Kobold at Challenge Rating of 1/8 up to the Manitcore at Challenge Rating of 3, and then ‘Boss Fights’, which includes the Lich, the Tarrasque, and the Kraken, all with a Challenge Rating of twenty or more. ‘Oddities’ add a mix of the different and the weird, like the Gelatinous Cube, the Flumph, and the Modron. Dragons’, the last of these is devoted to iconic monsters and their minions.

‘Podcasts’ gives space to just the two long running series—How We Roll and Adventure Zone. The former again has a nice callback to Icewind Dale: Rime of the Frostmaiden, but both are given good introductions here. Again, just the two are covered, High Rollers and Acquisitions Incorporated, but ‘Live Streams’ reflects the move from the podcast as a means of presenting actual play to Twitch streams, from audio to visual. The look at the hobby comes up to date with ‘Find Your People’, which give two community groups—No More Damsels and Three Black Halflings—which work to build communities which are more inclusive and welcome greater representation in the hobby.

Of course, Dungeons & Dragons Annual 2022 being a British annual, it is not without its puzzles. So there are mazes, word searches, spot the difference, and more. All themed around Dungeons & Dragons. The maze for example, has you attempt to escape from Count Strahd von Zarovich’s clutches, whilst ‘Volo’s (Scrambled) Guide to Monsters’ is an anagram puzzle.

Physically, the Dungeons & Dragons Annual 2022 is snappily presented. There is plenty of full colour artwork drawn from Dungeons & Dragons, Fifth Edition, and the writing is clear and kept short, so is an easy read for its intended audience. It would have been nice to seen a little more artwork from the earlier versions of the roleplaying where they are mentioned.