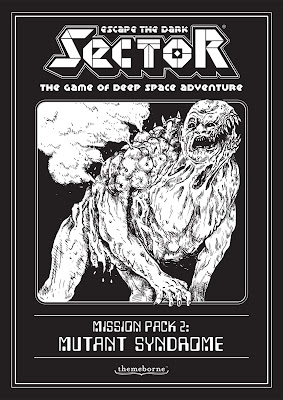 As with Escape the Dark Sector – Mission Pack 1: Twisted Tech before it, Escape the Dark Sector – Mission Pack 2: Mutant Syndrome includes twelve new Chapter cards which represent the encounters the escapees will have as they flee. They may run into raging mutant prisoners, dumping grounds for radioactive waste, hideously mutated guards, three-headed security dogs, gain medical assistance from a hologram, and even a mutant testing station! The single Boss card is for The Mutanoid, a mutant so twisted that his body consistently emit mutagenic spores that inflict damage on the escapees—or mutate them. It makes use of the new core mechanic in the expansion, the ‘Mutation Die’.

The ‘Mutation Die’ is not only rolled for The Mutanoid Boss at the end of the game but also for certain Chapter cards and Item cards—or rather Mutation cards which are added to the Item deck. When drawn, these can force an escapee to discard Item cards from his Inventory as they prevent him carrying anything, but their most immediate effect to prevent an escapee from using his Cybernetic Implant. However, a Mutation can have a greater effect. Depending upon the symbol rolled on the ‘Mutation Die’, an escapee might lose Hit Points, but he might suffer another effect all together. For example, a Mutation to the Arm can add a single Might result to an action or allow a Block in Close Combat, a Mutation to the Leg can add a single Cunning result to an action or prevent the loss of Hit Points from a single die roll, and so on. These are all one use mutations, but others change a roll of the Crew Die to a Wisdom result and reduce Hip Point loss by one, and are ongoing effects. Between Chapters, an escapee can excise a Mutation and permanently lose its effect, whether positive or negative. This is dangerous and painful and means that the escapee again loses Hit Points. Other items in the expansion include the ‘Stun Baton’ which on the successful inflicting of a wound, stuns the enemy and prevents them from attacking that round, whilst the ‘Life Serum’ either restores two Hit Points or removes a mutation.

Escape the Dark Sector – Mission Pack 2: Mutant Syndrome also adds three new escapees. Lieutenants Grib, Parvon, and Xaree are new alien crewmembers and each comes with their Crew die. This introduces the ‘Mixed Double’ consisting of two symbols within a shield, which even though they are different, they count as a double of either symbol as required. This gives the three new Lieutenants some flexibility in terms of their die results.
Physically, Escape the Dark Sector – Mission Pack 2: Mutant Syndrome is as well produced as the core game. The new Chapter and Boss Cards are large and in general easy to read and understand. Each one is illustrated in Black and White, in a style which echoes that of the Fighting Fantasy series and Warhammer 40K last seen in the nineteen eighties. The Item and Drone cards are also easy to use and the dice are clear and simple. The rule book requires a careful read, if only to grasp how the different new mechanics work.

Escape the Dark Sector – Mission Pack 2: Mutant Syndrome adds new subsystems as well as new encounters with the Chapter and Boss Cards. They add both elements of complexity and luck, though more of the latter than the former. Design wise, this expansion is again thematically strong rather than narratively strong, but the Mutation is only strong when it comes to the Chapter cards and the encounters the escapees can have. In comparison, the potential mutations they might suffer during their escape attempt are underwhelming, in terms of both number in the expansion and theme. Anyone expecting a rioting of weird and wonderful powers and defects will be disappointed. Even so, Escape the Dark Sector – Mission Pack 2: Mutant Syndrome is still easy enough to add to the core game. Overall, Escape the Dark Sector – Mission Pack 2: Mutant Syndrome is not quite as interesting as it could have been, but still a decent expansion which adds more Sci-Fi theme to Escape the Dark Sector: The Game of Deep Space Adventure.