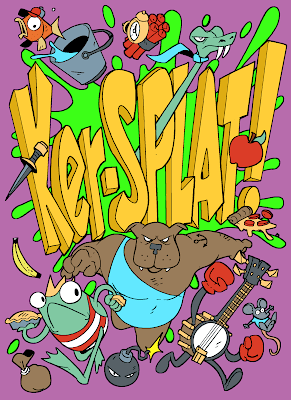 Ker-Splat! is a cartoon action roleplaying game inspired by Looney Toons and Tom & Jerry. Dynamite will get stuffed down trousers. Anvils will land on heads. Walls will be run into. Cheesegraters will be slide up and down. Stairs will be fallen down. Custard pies will be thrown and land in faces. And whether he has fallen down or is still standing, the cartoon character who suffers all or any one of these will be Bamboozled as a scattering of stars or a flight of tweeting birds orbit his head. Published by MacGuffin & Company, Ker-Splat! is a fast-playing silly roleplaying game for anyone who wants to play a chicken with a chainsaw, an otter on a skateboard, a goldfish in a bucket, a squirrel wiseguy, a mouse with a mallet, or anything else. It is ridiculous, it conforms to genre physics, not real physics, and it involves either Ordered Chaos or Pure Chaos, and true to the genre, it is played out in two-dimensional world.

A Player Character in Ker-Splat! is defined by his name, his Pitch, his Drive, his Quirk, his Look, and seven stats. His Pitch is whatever the character is, for example, a ‘Raccoon in a monocle and waistcoat who wants an easy life’ or ‘A Knight on a noble quest who was never told what the quest was and whose visor keeps jamming closed’. His Drive is his motivation, such as ‘Dining on freshly caught chicken’ or ‘Preventing the wolf from eating you and your fellow chickens’. His Quirk is whatever his special ability is, Ker-Splat! listing some nineteen, such as Pocket Dimension, Lucky Duck, Disguise, Wealth, and more.
A Player Character has seven stats. These are divided between the five Humours—Pow, Zip, Umm, Wow, and Pop, and Ouch! and HUH!, the latter measuring how long it is until he is either Ker-Splatted or Bambozzled. Pow is the character’s physical strength and size, Zip how fast and dextrous he is, Umm how brainy, Wow how charismatic, and Pop his ability to use tools and equipment, as well as his ability to order something from the ‘AKMEE™ PLC Catalog’. The Humours are rated between two and nineteen, and there are pluses and minuses to their high or low. For example, a Player Character with a high Zip will be fast and able to run away, but will often miss the little details, be impatient, and so on. With a low Zip, the character will take his time to understand things, not act rashly, trigger fewer traps, and so on. A Player Character with a high Umm will be good at making plans and spotting things, but in the two-dimensional cartoon world of Ker-Splat! will notice that tunnel entrance is just painted on the side of the mountain and so go around, whereas a Player Character with a low Umm would accept that tunnel as reality and race down it (and likely get run over by a train).

Player Character is simple. A player defines his character’s Pitch, Drive, Quirk, and Look, but he only sets the value for one of his character’s Humours. Each of the other players takes it in turn to set one stat before passing the character to the next player and so on round the table until all of the Humours are defined. In each case, a player is simply assigning a value, but in this way, the players collectively define the cast of the carton.

Chuffy the Chicken
Chicken with a Chainsaw, who isn’t going to let the wolf get her or her fellow chickens
Pow 5 Zip 12 Umm 9 Wow 12 Pop 10
Ouch! 3
HUH! 3
Quirk: Lucky Duck

There are two options for combat—Ordered Chaos and Pure Chaos. The more complex of these is Ordered Chaos. In Ordered Chaos, the Player Characters are in order of their Humours depending upon the situation. For example, a martial arts contest would go in order of the highest to lowest Zip, but lowest Zip to highest Zip in a considered confrontation. NPCs, which are kept simple with a strength and a weakness, are slotted into the order as the GM decides. This is simple enough as long as the GM remembers which Humour applies to which situation. If an attack works, the target character’s player rolls a six-sided die against his Ouch! or HUH! depending on the nature of the attack. Roll under and the Player Character is fine, roll over and the Player Character is either Ker-Splatted or Bamboozled. When his character is Ker-Splatted or Bamboozled, his player keeps rolling a twenty-sided die until he rolls a one and comes to… A fight like this continues until either one side prevails or the GM gets bored…

The Pure Chaos variant—which is not recommended for online play—uses the same rules for de-escalation. Thus everyone rolls a twenty-sided die. When a player rolls a one, he can act. It is chaotic and unlike the de-escalation rules it fits the genre.

Ker-Splat! is primarily designed to be played as a one-shot. However, it does include rules for campaign, a Player Character YAY! at the end of each scenario which can subsequently be spent to buy a ‘Spree of Luck’, a temporary ‘Intern’, or even ‘Irritate the GM’. The latter lets a player pass a note to the GM with improv style play notes about how the scenario is being narrated which she must follow. Most of these options are quite fun and play around with the narrative rather than improve a Player Character. The GM also gets her on set of GM YAY options to purchase.

Ker-Splat! includes guidelines in inclusivity that take into account that most Player Characters will be animals—walking talking animals in a world where there are animals who are not! This cover gender and even sex, but also the appropriate use of stereotypes, noting that this is difficult to avoid given the genre. However, the advice is to be careful and considerate, and that includes not characters having a black face after explosions. There is also advice on the use of the Big Red Button as more immediate version of the X-card. There are more usual guidelines for NPC and scenario design and a couple of same scenarios.

Physically, Ker-Splat! is a bright and breezy affair. There is lots of bold, full colour artwork throughout and the book is well written. It does need a close read in places, primarily because it is organised into seemingly random boxes, so does not flow quite so easily.

Ker-Splat! is designed to be chaotic, bonkers fun and it will do that. Some of the rules arguably do not fit the genre and others do need everyone to adjust to them as they are counterintuitive, because almost every other roleplaying game does not have a player to roll to fail. However, make that adjustment and the ‘roll to succeed/roll to fail’ mechanic works and suits the genre. Overall, Ker-Splat! combines light, fast cartoon action with some fun narrative elements which add to the chaos with being quick and easy to bring to the table.
Posted by pookie at 18:00