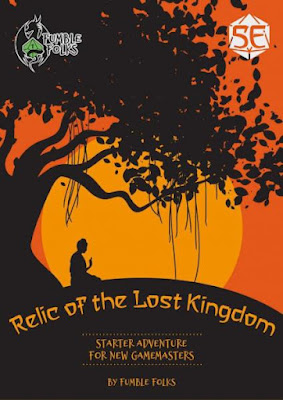 Relic of the Lost Kingdom is an adventure for Dungeons & Dragons, Fifth Edition. Published by Fumble Folks, it is designed as a ‘Starter Adventure for New Game Masters’ as well as four to five new Player Characters of First and Second Level. The set-up is simple, the plot direct, and the background manages to be detailed enough to support the plot, but sufficiently generic that the Dungeon Master could easily drop it into or adapt it to her own campaign world. The setting is an alpine valley, once part of a great realm—the Lost Kingdom of the title, now dotted by farms, small villages, and the occasional town, but still important as a trade route through to neighbouring kingdoms. At the foot of the mountains stands a monastery dedicated to the Goddess of Grain. For the past few weeks, the undead have poured out of nearby crypts where the dead from the battles between the barbarians and the Lost Kingdom were buried centuries ago, and on successive nights, attacked the monastery in an attempt to break in. The Player Characters are hired to travel to the crypt, there to replace a stolen artefact, and so help to repel the undead, if not put them to rest.

Relic of the Lost Kingdom begins in the town with the Player Characters either seeing the notice for the job or hearing it announced by town crier—a nice touch given that not every Player Character is literate—and then being interviewed by the Elven priest, Rhys, at the monastery. He is direct in what he asks the Player Characters, including telling them not to trick him by running off with the artefact or dumping it in the river. If they decide to trick him, it is outside the scope of the adventure, but otherwise, this pushes the players and their characters to follow the scenario’s plot. In any other scenario this might be seen as the designers pushing the players and their characters down a railroad, but the point of Relic of the Lost Kingdom is to introduce the Dungeon Master to running Dungeons & Dragons, Fifth Edition and to do so in a direct and uncomplicated fashion. Another nice touch is that the adventure introduces the idea of there being other adventurers in the world, as they were the ones responsible for having opened the crypt and removed the artefact in the first place—although Rhys does not blame them for that. Rhys can also have Lilith Mosswater, a Halfling Cleric, to accompany them, and she will be the main NPC who the Dungeon Master will portray in the adventure. She is there if the Player Characters do not have a Cleric or Paladin amongst their number.

Physically, Relic of the Lost Kingdom is in general, well presented and well written. It is lightly illustrated in mostly silhouettes and the cartography is simple and clear. It does need an edit in places, for example, the adventure cannot decide whether it is an abbey, monastery, or temple, which is being assaulted by the undead, or indeed a tomb or crypt where the undead can be found.

Relic of the Lost Kingdom can be run in a four-hour session and so at a convention as well. It is easy to use, it is easy to adapt to a campaign world, and it is easy for the experienced Dungeon Master to develop as necessary. Unfortunately, Relic of the Lost Kingdom is not quite as helpful as it could be for the new Dungeon Master. For example, it lacks the stats for Lilith Mosswater. Not only could she be a replacement Player Character, but she could also be a useful source of information for the Player Characters. Now she is in places in the adventure, but arguably not enough. The advice for the Dungeon Master in terms of staging each encounter or room and reacting to the players and their characters could also have been a bit stronger in places too. Of course, an experienced Dungeon Master will be able to run Relic of the Lost Kingdom with a minimum of preparation and effort.

Relic of the Lost Kingdom is a simple, direct adventure. It is suitable to be run by the neophyte Dungeon Master as intended. However, it does need a little more development in places and consequently requires a little more preparation time for the new Dungeon Master than it necessarily should have done.