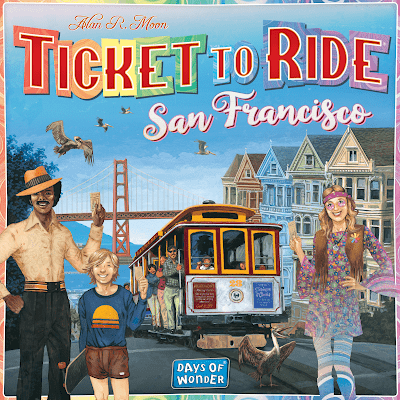 Inside the small box can be found a small board which depicts the centre of San Francisco, from the Golden Gate Bridge in the northwest to Potrero Hill in the southeast and Sunset in the southwest to Alcatraz in the northeast. Notably, several of the destinations are marked in red, including Alcatraz, Golden Gate Bridge, Potrero Hill, Sunset, and The Embarcadero. This is where the Tourist Tokens—representing the souvenirs collected by the players when they connect to those destinations—are placed at the start of play. There are also the expected Cable Car pieces (as opposed to the trains of standard Ticket to Ride), the Transportation cards drawn and used to claim routes between destinations, and the Destination Tickets indicating which two Destinations need to be connected to be completed. The Cable Car pieces are nicely sculpted and can actually be seen through from one side to the other. Each player has twenty of these at the start of the game. The Transportation cards come in the standard colours for Ticket to Ride, but are illustrated with a different form of transport for each colour. So black is illustrated with a bus, blue with a tram, green with a car not unlike the Ford Mustang as driven by Steve McQueen in the film Bullitt (which of course is set in the city), purple with a Volkswagen Camper, and so on. This really makes the cards stand out and easier to view for anyone who suffers from colour blindness. Similarly, the Destination Tickets are bright, colourful, and easy to read. As expected, the rules leaflet is clearly written, easy to understand, and the opening pages show how to set up the game. It can be read through in mere minutes and play started all but immediately. 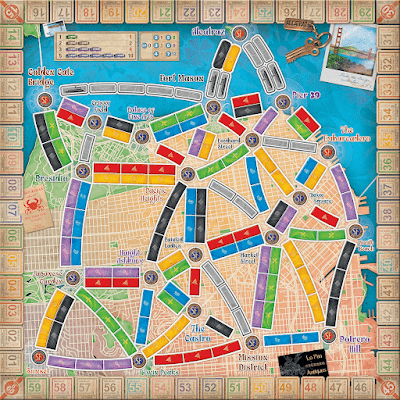 The board itself is also bright and colourful. The scoring track round the edge of the board is done as a series of cable car tickets in keeping with the form of transport used in Ticket to Ride: San Francisco. Most routes are one, two, or three spaces in length, and there is one five-space route. One difference with the previous titles in the series is that it includes ferries, the slightly more complex routes first seen in Ticket to Ride: Europe, though only three of them, two of which go to Alcatraz. There is a very knowing joke on the board.

Play in Ticket to Ride: San Francisco is the same as standard Ticket to Ride. Each player starts the game with some Destination Tickets and some Transportation cards. On his turn, a player can take one of three actions. Either draw two Transportation cards; draw two Destination Tickets and either keep one or two, but must keep one; or claim a route between two connected Locations. To claim a route, a player must expend a number of cards equal to its length, either matching the colour of the route or a mix of matching colour cards and the multi-coloured cards, which essentially act as wild cards. Some routes are marked in grey and so can use any set of colours or multi-coloured cards. Three routes are ferry routes and require a Ferry or multicolour Transportation card and the indicated number of Transportation cards in the right colour to claim.

When a player claims a route connected with one of the cities with the Tourist Tokens on it, he takes one Tourist Token. At the end of the game, each player will be awarded a number of points depending on how many Tourist Tokens he has collected. This is reminiscent of, is the Stock Share cards of the Pennsylvania map from Ticket to Ride Map Collection Vol. 5: United Kingdom + Pennsylvania. In that expansion, every time a player claimed a route, he could in most cases, also claim a Stock Share card in a particular company. At the end of the game, a player would score bonus points depending upon the number of Stock Share cards he held in the various companies in the expansion. In that expansion though, all routes had a Stock Share reward, but in Ticket to Ride: San Francisco, they can only be gained from five Destinations on the outer edge of the map and two other locations. These other locations can be anywhere on the map and are chosen by the two players who go last in the turn order.

Physically, Ticket to Ride: San Francisco is very nicely produced. It is bright and breezy and has a very sunny disposition. Everything is produced to the high standard you would expect for a Ticket to Ride game.