Miskatonic Monday #130: A Small Tremor in the Mountains 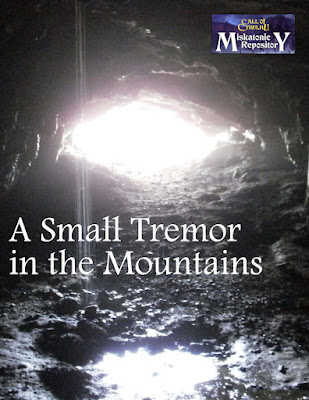 Setting: Modern Day Iceland
Product: Scenario
What You Get: Twenty-two page, 1.18 MB Full Colour PDF
Elevator Pitch: What scares the scary down below?
Plot Hook: Earthquake opens a new cave network. What thrills and treasures does it hide?
Plot Support: Staging advice, cave plans, three NPCs, two Mythos monsters, some vermin, and a Chase diagram.
Production Values: Decent.
Pros
# Linear, physically-orientated one-shot
# Claustrophobia
# Speluncaphobia
# Good use of the Chase mechanics
# Dramatic finale
# Finally, an Investigator gets to use the Climb and Jump skills!
Cons
# Primary NPC actions poorly handled
# Needs a slight edit and localisation
# Little scope for Adventurer/Mythos interaction or finding out what is going on in the scenario
# Main Mythos threat not really a threat, not even to the Minor Mythos threat—until dislodged.
# Finale kicks in with little time for interaction
Conclusion
# One-shot with strong physical element puts the adventurers on the path to confrontation with—and desperate escape from—the Mythos, ending in a good use the Chase mechanic.
# Backstory remains hidden and the main Mythos threat is not a threat until dislodged.
Posted by pookie at 18:00