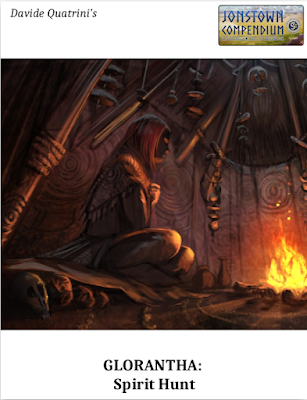 What is it?
GLORANTHA: Spirit Hunt is a scenario for use with RuneQuest: Roleplaying in Glorantha.

The layout is clean and tidy. It is art free, but the cartography is excellent.

The map can be found here.

Where is it set?
GLORANTHA: Spirit Hunt is set in or near Esrolia. It is suggested that it be set in the hills between Helerdon and the Doktados mountains.

Who do you play?
Player Characters of all types could play this scenario, but as written they are expected to be connected to Esrolia. A Player Character with either Hate (Lunars) or Hate (Lunar Empire) can be driven to undertake this scenario.
What do you need?
GLORANTHA: Spirit Hunt requires RuneQuest: Roleplaying in Glorantha and the Glorantha Bestiary.
What do you get?
GLORANTHA: Spirit Hunt details the hiding place of the Nyctalope sent by the Red Emperor in 1610 ST which successfully assassinated Queen Valinalda of Esrolia. The Player Characters are either sent by one of the Esrolian Queens or Ernalda’s priestess to destroy the spirit, have to do so as part of a heroquest, or simply stumbled across the lair. The scenario provides the basic background, a set of random encounters, and the floorplans of the ruined shrine where the Nyctalope is hiding.
Although the map is excellent, GLORANTHA: Spirit Hunt is uninteresting. There is perhaps an engaging and intriguing scenario which explores the hunt for the spirit which assassinated Queen Valinalda, GLORANTHA: Spirit Hunt is not that. The Game Master could develop it further, especially if one of more of the Player Characters is from Esrolia, is related or has links to one of the Queens, or actively hates the Lunars. However, there is no roleplaying or interaction involved here, no mystery, no anything except combat. So why bother starting with this when there so little to work from?
Again, the Game Master should download the map by Dyson Logos and use that to create her own scenario. It would be unlikely to be any worse or more uninspiring than GLORANTHA: Spirit Hunt is and it is definitely less expensive.
Is it worth your time?
Yes—GLORANTHA: Spirit Hunt is straightforward and easy to run, and requires relatively little effort to prepare.
No—GLORANTHA: Spirit Hunt is another self-contained mini-dungeon which the author kindly leaves much of the interesting detail, stats, and flavour to be found in the back story—as is his standard practice—for the Game Master to develop herself. Cheap, cheerless, characterless, and charmless. Not mostly, but completely.
Maybe—GLORANTHA: Spirit Hunt is straightforward and easy to run, and requires relatively little effort to prepare, but the Game Master could easily come up with an alternative which was interesting and involving.
Posted by pookie at 18:00