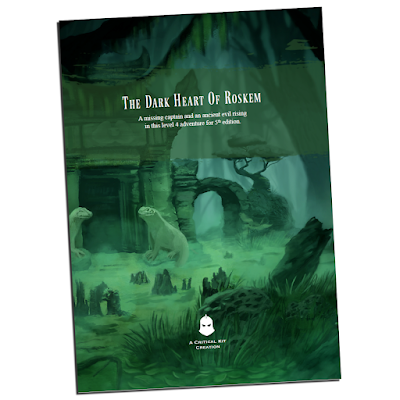 The Dark Heart of Roskem is an adventure for Dungeons & Dragons, Fifth Edition. Published by Critical Kit, it is designed for a party of four to five Player Characters of Fourth Level and is intended to be played in a single session, either as a one-shot or as part of an ongoing campaign. It involves disappearances from a village, a nearby vile swamp, and dark, ancient magic. The scenario involves some interaction and investigation, but primarily emphasises combat and exploration.

The Dark Heart of Roskem takes place along the banks of the river Roskem, in and around the fishing settlement of Myristat, and then in the Roskem swamp. It opens as the Player Characters are on the Scar Road travelling  towards to the village, which is best known for the Roskite, the giant freshwater lobsters that are farmed along the river’s banks. Suddenly, a man lurches out of the swamp, delirious and covered with a green sludge—not to attack the Player Characters, but wanting their aid and to deliver a warning. There is a danger to Myristat in the swamp and the man keeps saying the word, “Krutz.” If the Player Characters take the man into town, they discover that he is a member of the town guard, who went into the swamp a few days before along with Krutz—who happens to be the captain of the town guard. However, Krutz himself has not returned, and neither have the other guards who accompanied him, and that is not all, a man and woman have also disappeared from the village, leaving their daughter behind. The mayor of Myristat offers the Player Characters a handsome reward if they find out what happened to Captain Krutz and the missing couple.

After a little investigation and interaction—perhaps hindered by an overly officious Halfling mayoral assistant, the Player Characters learn that Captain Krutz was actually going into the swamp to hunt for treasure. Speak to the right people and they can learn that Roskem Swamp has a dark secret—long ago a mage disappeared into the swamp and there took control of the Thornscale Lizardmen, perhaps to conduct his research in solitude even as he claimed to be a god! The swamp itself is as bad as can be imagined—if not worse, with its maddening mist that drives those caught in its whisps to repeat the word ‘green’ or become entangled in vines. Along the way, they may encounter a surprisingly chatty and genial Lizardman, who will give pointers towards the Temple of Vines and warn them of its Dark Heart.

The temple itself is quite small, amounting to no more than six rooms. Here the Player Characters will find the disappeared men and women, who like the rest of the temple, are draped and wrapped in vines. At their heart is the Swamp King, a humanoid statue of writhing vines and fungal mass which seems to want to control everything in the temple. Can the Player Characters defeat the Swamp King, drive back the vines, and so discover the true secrets of the temple?

Rounding out The Dark Heart of Roskem are two appendices. The first is longer and gives the details of the scenario’s various monsters. These include the more traditional denizens of the swamp—Giant Swamp Leeches, Swarms of Poisonous Snakes, and Lizardfolk, but alongside this are the Bog Bodies, leathery undead which exhale a thick cloud of fog that they can sense any creature within it; Lizard Gargoyles (which are exactly what they say they are); and the Swamp King itself. The latter can pierce and ensnare with its vines, raise Bog Bodies, and it can cast Druidic spells too. The shorter has the single entry, a description of a magical item, a Vine Whip. This splits into three and can do a little damage to three targets as well as ensnaring one of them.

Physically, The Dark Heart of Roskem is decently laid out and easy to read. There is no map of the area or the swamp, so either the Dungeon Master will want to draw one herself or find a place in her campaign to locate the adventure. The map of the Temple of Vines is decent enough though. The artwork is fairly light and sees a degree of repetition in its use. The writing is generally clear, although the dark history of Roskem Swamp is written for the Dungeon Master rather than the player, and she will probably want to adapt it so that it presents sufficient information without giving too much away.

As soon as ‘Krutz’, the name of the guard captain is mentioned, the first thought is to wonder if The Dark Heart of Roskem has anything to do with Colonel Kurtz of Francis Ford Coppola’s Apocalypse Now fame? The author confirms that it was at least the scenario’s inspiration in the  afterword, though it is up to the Dungeon Master if she wants to develop that inspiration any further. There is scope too for a sequel, but that is something that the Dungeon Master will need to0 develop on her own. Such a sequel hints at a Lord of the Rings-style journey at the very least… Although it is short—specifically designed for a single session—The Dark Heart of Roskem has a foetid, hot, and sweaty feel of a swamp fallen under a dark influence, and is easy to run as a one-shot or add to a campaign.