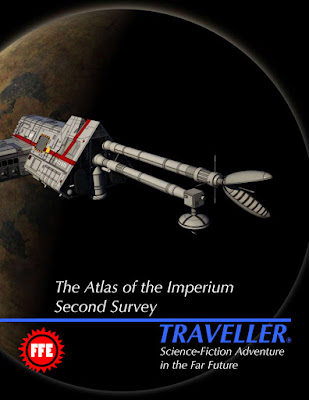 “Space is big. Really big. You just won't believe how vastly, hugely, mindbogglingly big it is. I mean, you may think it's a long way down the road to the chemist's, but that's just peanuts to space.” It seems glib to be opening with a quote from Douglas Adams’ The Hitch-Hiker’s Guide to the Guide, but given the sense of scale to The Atlas Of The Imperium: Second Survey, it nevertheless feels appropriate. Published by Far Future Enterprises, this is a supplement designed for use with Traveller5: Science-Fiction Adventures in the Far Future, but actually compatible with any version of Traveller which brings together over sixty star maps which together show the vast expanse of the Third Imperium and nearby sectors in Charted Space. It covers an area roughly thirty-nine by twenty-nine sectors—each sector consisting of sixteen subsectors, and each subsector ten by eight parsecs across, meaning that—roughly—the area covered by The Atlas Of The Imperium: Second Survey is fifteen hundred and sixty by nine-hundred-and-twenty-eight parsecs across! Make no mistake, from the Coreward sectors of Gashikan and Trenchans to the Rimward sectors of Aldebaran and Langere, and from the Spinward sectors of the Vanguard Reaches and Tienspevnekr (and beyond!) to the Trailing sectors of Arzul and the Crucis Margin, this book covers a huge amount of space.

However, The Atlas Of The Imperium: Second Survey covers a whole lot more than just space. Every sector is given a one-page map depicting all sixteen of its subsectors, marked up with world types—worlds with water, desert worlds, or asteroids, whether a gas giant is present in the system, the letter code for the type of starport present, and type of base present, including Imperial Naval Base, Scout Base, and so on. The list of symbols has been greatly expanded to cover an array of base types, such as a Zhodani Base, Corsair/Clan/Embassy, Research Station, Imperial Reserve, Penal Colony, and more. Worlds with large populations have their names given in uppercase, letter codes indicate political allegiances, and various worlds are ringed to indicate travel zones—Amber and Red. Lastly X-boat routes are marked, as the political borders in different colours. The name of each sector, plus those for each of the sixteen subsectors in the sector is given in the outer margin.

Each sector is followed by a listing of the world data for every world in the sector, the data running for barely a page for the lesser populated sector, but as many as three pages! This is done in the Traveller5 Second Survey format. Thus, hex location and main world name, followed by the UWP or Universal World Profile (starport, planetary size, atmosphere type, hydrographic percentage, population, government type, law level, and tech level), all pretty much as you would expect for Traveller. The Traveller5 Second Survey format expands this with an extensive list of further classifications and remarks. Thus a world can have Trade Classifications such as Garden World or Non-Agricultural, Remarks indicating whether the world is home to an Ancient Site, a Penal Colony, or under Military Rule, the highest nobility found there if any, whilst Importance, Economic, and Cultural Extensions all expand upon the basic details of each and every world.

However, in many cases, the Importance, Economic, and Cultural Extensions all have code strings of their own, though much shorter than the standard UWP, represent more numbers for the Game Master to interpret and attempt to bring to the gaming table. For example, the Cultural Extension includes ratings for the world’s Heterogeneity, Acceptance, and Strangeness, with seven being the norm. Overall, it is a lot of information to take in and interpret, and the process of doing so, is hampered by the way in which the information is presented. The content on the maps is small enough, but the text size for the world data is not that much larger and presented in dense columns of fairly text makes it a challenge to read and pick any details.

The Atlas Of The Imperium: Second Survey is designed to be a navigational guide to the Third Imperium and its surrounding worlds—in game and out of game. In game, it is an update of the First Survey conducted by the Imperial Grand Survey, an office of the Imperial Interstellar Scout Service, and published in the year 420 after a hundred years of work. The Second Survey, a much-needed update and expansion of the obsolete First Survey was begun as part of the millennial celebrations of the Third Imperium, and published in 1065. The current version of The Atlas Of The Imperium: Second Survey has a publication date of 1105. Out of game, The Atlas Of The Imperium: Second Survey is an update of The Atlas Of The Imperium published by Game Designers’ Workshop in 1984, and provides a massive amount of information for the Game Master to explore and see how the many sectors, subsectors, polities, and worlds relate to each other, and at least have the basic information about world to hand, if not necessarily the specifics. One sector, Foreven, abutting the Zhodani Consulate, just Spinward of the Spinward Marches, apart from a few worlds, has been left intentionally blank, including the specific World Data entries which follow, essentially providing the Game Master with two pages of question marks.

In some ways though, the most interesting aspect to The Atlas Of The Imperium: Second Survey is its credits pages. This names the designers and origins of each one of the supplement’s nearly seventy sectors, as well who most recently developed it for inclusion here. In doing so, it mentions many of the great names that long time Traveller fans will recognise, such as J. Andrew Keith, William H. Keith, Joe D. Fugate Sr. Martin Dougherty, and more, drawing on sourcebooks as diverse as MegaTraveller Alien, Volume 1: Vilani & Vargr, Crucis Margin, Gateway to Destiny, and many, many more. It is a reminder that a great deal of the setting to Traveller and its Third Imperium and beyond, was not necessarily developed by Marc Miller and Game Designers’ Workshop, but rather farmed out to other publishers to develop and publish content for.

Physically, The Atlas Of The Imperium: Second Survey is cleanly laid out, but does need another edit and barring the cover, is illustration free. Of course, the text and the maps may well be too small for some readers to read with any ease and a magnifying glass may be warranted.

The Atlas Of The Imperium: Second Survey feels such a high-level product–both in the game and out of it, providing the ultimate in grand overview of the Third Imperium and its surrounds, that it is really difficult to say how useful the supplement truly is. It does provide both player and Game Master alike with swathes of maps and territories and data, that it is difficult to encompass. The likelihood after all, is that a gaming group and its campaign is going to dig down from the lofty heights presented here and be exploring, adventuring, and gaming at the level of the subsector and sector at most. For that, they will need further information, which of course, is not present in the pages of The Atlas Of The Imperium: Second Survey. Which is reasonable enough, since such a project would have the scope and stature of the Encyclopaedia Galactica of Isaac Asimov’s Foundation Trilogy, one of the primary inspirations for Traveller. Yet, The Atlas Of The Imperium: Second Survey does feel like it needs context. Perhaps a page devoted to each sector, providing an overview and some Library Data (there is none in the supplement)?

Ultimately, however useful a Game Master and her players find The Atlas Of The Imperium: Second Survey, it is very much a huge update and an enormous improvement in both the amount and the presentation of the information first seen in 1984’s The Atlas of the Imperium. It really needs an Encyclopaedia of the Third Imperium as a companion.