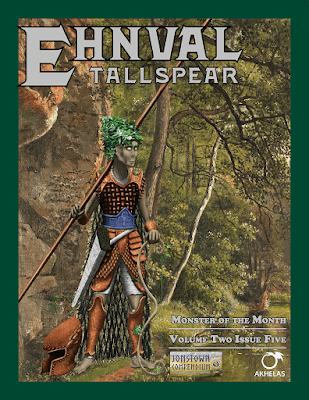 What is it?
Ehnval Tallspear presents an NPC and his entourage, and trinkets for use with RuneQuest: Roleplaying in Glorantha.
It is a twenty-four page, full colour, 2.49 MB PDF.
The layout is clean and tidy, and its illustrations good.

Where is it set?
Ehnval Tallspear is nominally set in and along the edge of the Astrola Forest in northern Esrolia, but the NPC and his entourage can be encountered almost anywhere the Game Master decides.

Who do you play?
No specific character types are required to encounter Ehnval Tallspear. Worshippers of Odalya may have an interesting encounter with one of his companions though and anyone who destroys parts of the forest it is his sacred duty to protect will find him a fierce enemy. A worhsipper of Chalana Arroy or another healing deity will be presented with an interesting challenge in one of the adventure seeds.

What do you need?
Ehnval Tallspear requires RuneQuest: Roleplaying in Glorantha, the Glorantha Bestiary, and The Red Book of Magic.
What do you get?
The second volume of ‘Monster of the Month’ presents not monsters in the sense of creatures and spirits and gods that was the feature of the first volume. Instead, it focuses upon Rune Masters, those who have achieved affinity with their Runes and gained great magics, mastered skills, and accrued allies—corporeal and spiritual. They are powerful, influential, and potentially important in the Hero Wars to come that herald the end of the age and beginning of another. They can be allies, they can be enemies, and whether ally or enemy, some of them can still be monsters.
The Ehnval Tallspear entry is Ehnval Tallspear, which describes a Wood Lord of Aldrya whose duty is to protect Derstrovil Grove and the Old Woods as both Speaker to Foreigners and Defender of the Grove. He is surprisingly outgoing for an Aldryami and has had dealings with humans, both as a fierce protector of, and an envoy from the forest. Ultimately his motives may seem alien to humans, but he is outwardly cheerful, even extroverted in most of his dealings when visiting beyond the treeline.
In addition to presenting the stats, history, and personality of the Wood Lord, the supplement suggests how he might be used as a friend or an enemy, also detailing his tactic should he become the latter. Both options are supported by an adventure seed each. In the first, he leaves the forest desperate to find a worshipper of Chalana Arroy or another healing deity who can help with a strange blight which has beset the forest that Aldryami has been unable to heal, whilst in the second, he begins a series of unprovoked strikes against the farms and communities abutting the forest. Can the adventurers determine the cause?
Ehnval Tallspear also details a number of interesting items. These start with a number of Elvish trinkets which can add flavour and detail to dealings with the Aldryami, and can either be used as gifts or items for trade. They include Arstolan honey and its flavours and effects (for example, black honey has little flavour, but greatly enhances fruit pies and sends anyone who knows a sorcery spell who eats such pies, to sleep), grown woodwork, Luck-Sprigs, and more. The secrets of the Icola Seed and Living Copper are also revealed. When thrown and the Accelerate Growth Rune spell is cast on an Icola Seed, it rapidly grows into vines that coil around and ensnare a target, whilst Living Copper is grown in Aldryami Dryad groves and when ultimately harvested—growing a branch can take centuries—can be enchanted and coldworked into various objects, including weapons. Ehnval Tallspear himself wields a spear of living copper.
Ehnval Tallspear’s entourage is also fully detailed. Andovar the Watcher is another Elf, but Green where Ehnval Tallspear is Brown, an Initiate of Yelmalio whose duty is to protect the grove during Dark and Storm Seams when the Wood Lord hibernates, whilst the most fun are  incredibly ancient Runner, and Borulgus, an Elf-Friend and talking bear who enjoys stalking hunters and then startling them when he speaks! An encounter with him should be interesting for any Initiate of Odayla. Rounding out the supplement of course, are the full stats and sheets for the four NPCs, plus generic Elf bodyguards.
Is it worth your time?
Yes—Ehnval Tallspear presents a potentially interesting ally or enemy, plus supporting cast, should the Game Master want to include Aldryami in her campaign or her campaign is specifically set in Esrolia (although the supplement can be set elsewhere).
No—Ehnval Tallspear presents a potentially interesting ally or enemy, plus supporting cast, should the Game Master want to include Aldryami in her campaign or her campaign is specifically set in Esrolia, but it definitely adheres to ‘Your Glorantha May Vary’. So it may not be in line with how the Game Master—or indeed, even how Chaosium, Inc.—views the Aldryami.
Maybe—Ehnval Tallspear presents a potentially interesting ally or enemy, but the Game Master may simply not want to involve the Aldryami in her campaign, or even take her campaign to Esrolia.
Posted by pookie at 12:00