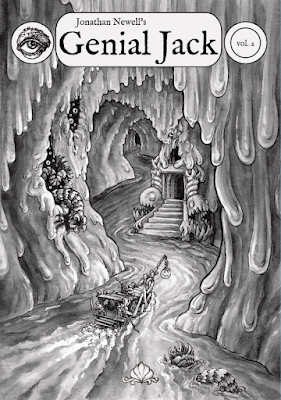 There is no dungeon as queasy, bilious, or tumorous than Genial Jack Vol. 2. It also throws in swollen tongued pestiferous thrushspawn, toxically affectionate amoeboids, a true vampire squid, and Dog-Nymph Skulla, the Swallowed Sea-Devil, along with Gutreavers, Tapeworm swarms, shivers of Septic Sharks, lost and swallowed cities, wrecks aplenty, and more—all in the longest, most linear dungeon possible and all in the strangest location possible. The location is ‘Genial Jack’, the Godwhale, a levianthine Blue Whale which for centuries has been home to the teeming town of Jackburg built across his thick skin and in his stomachs and deep into his intestines, much of it made up of the ships he has swallowed and those that have sailed into his maw and permanently moored inside of him. Jackburg is home to peoples and islands that the whale—the ‘Genial Jack’ of the title—has swallowed, from the Draugr to the Fomorians, and today it serves as a roaming free port, from which merchants sell the strange and exotic goods they have acquired in distant lands as well as the ambergris constantly formed deep in his gut. Yet beyond—or rather behind—the public spaces of Jackburg, lie ancient wonders of swollen cities and partially digested Jackburgs past, the Ambergris Consortia and its tight control of perhaps the most precious substance found within the Godwhale, Gutreavers ready to attack vessels travelling deep into Genial Jack—plundering cargo and enslaving passengers and crew, and a refuge for its outcasts, such as criminals who have fled the reach of the Whaleguard and Jacksblood-Addicts who find a way to slice at the intestinal walls and feed their addiction to the whale’s blood. All this whilst the Gutgardeners, combining druidic magic and ancient technoscience, labour to keep Genial Jack’s digestive microbiome as healthy as they can. Essentially, in presenting the ‘Entrails’, Genial Jack Vol. 2 explores the Godwhale’s outback and hinterland...

Genial Jack Vol. 2, published by Lost Pages, continues the description of the Godwhale begun in Genial Jack Vol. I, a serialised setting of nautical weirdness and whimsy written for use with Dungeons & Dragons, Fifth Edition, but with an Old School Renaissance sensibility and tone combined with elements of steampunk and grotpunk. Where the first issue introduced the setting of the Godwhale from its city of Jackburg to The Gutgardens at the bottom of the whale’s main stomach, and its varied inhabitants such as the drowned Draugar, the shapeshifting Finfolk, the crafters that are the Formorians, Jackburg’s literal underclass the Urchins, the mercantile Octopoids, the vicious shark-men Selachians, and more.

Genial Jack Vol. 2 begins with reasons for entering the Entrails—Jackburg University being willing to pay for artifacts found there, mounting an ambergris mining expedition, investigating the loss of workers for the Ambergris Consortia, collecting a bounty on Ericius, the Urchin assassin, and more. The Dungeon Master can easily mix and match—or mismatch—these or keep them separate to provide motivations for multiple expeditions into the back end of the Godwhale. Since the Player Characters will be mounting an expedition, they will need equipment, so the next stop is shopping, and so a fully illustrated list of items particular to expeditions into the Entrails is also given, like the Fumehound, a tiny dog with a superb sense of smell which will bark in the presence of ambergris, or Anglerfish Lanterns, consisting of glass globes containing an ugly fish which will provide a light if fed. The circle of Guntgardeners is also described, an alternative organisation of Druids dedicated keeping the Godwhale’s guts contracting and relaxing, along with its commonly taught spells. Then the natural perils of the Entrails are detailed—the stench, the slipperiness, miasmas, and a whole lot more. Make no mistake, the Entrails are literally a stomach churning, pulsating, pustulent environment and not for the faint hearted.

As well as a decent table of random encounters, Genial Jack Vol. 2 details some fourteen magical items and artifacts to be found in the Entrails, many of which form the basis of quests and sidequests once the Player Characters have begun interacting with the denizens of Genial Jack’s bowels.  Some of them are highly entertaining, such as the skulk-marked Thanometer or Scavenger’s Compass, which detects the nearest dead humanoid; The Rude Shield, which has leering grotesque features and maintains an insulting running commentary on anything and everything it sees, and whilst it hinders attempts at stealth, it can cast Vicious Mockery; and The Bristling Blade, a boar-headed heavy scimitar which inflicts savage wounds out of which sprouts greasy bristles!

And then it is into the Entrails themselves, a tangled, colonic mass of the Small Intestine and the Large Intestine separated by Herniaheim. From the Duodenum Docks, the Player Characters will set out on a journey into darkness, their senses assaulted by musky, feculent, effluent, rotten, acrid, and bilious smells, and queasy sucking, whispering, rustling, and susurrating sounds. Every location begins by telling the Dungeon Master what her players can see, smell, and hear before presenting the  people to be found and the perils faced. So at the Filthfalls, the Player Characters will hear the rushing sound of debris and effluence, smell a combination of raw sewage, rotten fish, and ripe flesh, and whilst they will not encounter anyone, the Player Characters must work to avoid the foul falls, though if they can lower themselves into the pool below, they may find some plunder! Halfway down, they will find Hernaheim, a protrusion of the intestinal walls in which sits a cannibal fortess-town, ruled over the for the moment, by the Corsair Queen, Amaranth ‘Falsebeard’ Leech’, until such times as she is killed a pretender to the throne in the annual battle to the death in the Orifice. This is a fighting pit with a central pool filled with septic sharks and other intestinal creatures, which can be crossed using the flimsy rope bridges. In Hernaheim, septic sharks are farmed for food by Canness Sharpnose and her heretical order of Sawtail Nuns dedicated to the Sharkfather, all manner of ghastly fun can be found in Slimeside, Hernaheim’s ‘oozing’ pleasure district, and a previous version of Jackburg, long swallowed by Genial Jack hides secrets amidst its infestation of Jacksblood addicts.

Beyond Hernaheim stretches the Large Intestine, home to a Narwhal Skeleton, the Swallowed Sea-Devil Shrine, and the Elder Ruins. These are perhaps the final destinations for any venture this far deep into Genial Jack, and will likely require the Player Characters to have made multiple journeys into the depths. Many of the locations come with encounters and NPCs which will often spur the Player Characters to travel further. This is all backed up with a Colonic Bestiary containing sixteen entries, like the Corsair Queen, Gutreavers, Jacksblood-Addicts, Septic Sharks, Skulla, the Swallowed Sea-Devil, and even a True Vampire Squid, the latter of which takes a two whole pages!

Physically, Genial Jack Vol. 2 is a content-packed, well-written A5-sized fanzine style publication. The dungeon is fantastically illustrated and mapped out in thematically squidgy and convoluted detail.