On the tail of Old School Renaissance has come another movement—the rise of the fanzine. Although the fanzine—a nonprofessional and nonofficial publication produced by fans of a particular cultural phenomenon, got its start in Science Fiction fandom, in the gaming hobby it first started with Chess and Diplomacy fanzines before finding fertile ground in the roleplaying hobby in the 1970s. Here these amateurish publications allowed the hobby a public space for two things. First, they were somewhere that the hobby could voice opinions and ideas that lay outside those of a game’s publisher. Second, in the Golden Age of roleplaying when the Dungeon Masters were expected to create their own settings and adventures, they also provided a rough and ready source of support for the game of your choice. Many also served as vehicles for the fanzine editor’s house campaign and thus they showcased how another DM and group played said game. This would often change over time if a fanzine accepted submissions. Initially, fanzines were primarily dedicated to the big three RPGs of the 1970s—Dungeons & Dragons, RuneQuest, and Traveller—but fanzines have appeared dedicated to other RPGs since, some of which helped keep a game popular in the face of no official support.

Since 2008 with the publication of Fight On #1, the Old School Renaissance has had its own fanzines. The advantage of the Old School Renaissance is that the various Retroclones draw from the same source and thus one Dungeons & Dragons-style RPG is compatible with another. This means that the contents of one fanzine will be compatible with the Retroclone that you already run and play even if not specifically written for it. Labyrinth Lord and Lamentations of the Flame Princess Weird Fantasy Roleplay have proved to be popular choices to base fanzines around, as has Swords & Wizardry.

One of the trends in ZineQuest—the annual drive on Kickstarter to create fanzines, fan-created magazines supporting their favourite game—has been away from the more traditional format to the more focused. Traditionally, the fanzine consists of a collection of articles, covering a wide array of subjects. For example, in a fanzine devoted to Dungeons & Dragons or one of its many retroclones, such articles might provide new character Classes, spells, monsters, magical items, a scenario or dungeon, and so on. Although ZineQuest in 2021–ZineQuest #3–certainly included fanzines of that type, there were fanzines that were not so much fanzines as complete roleplaying games in themselves or complete supplements for existing roleplaying games. Desert Moon of Karth is a perfect example of the latter. 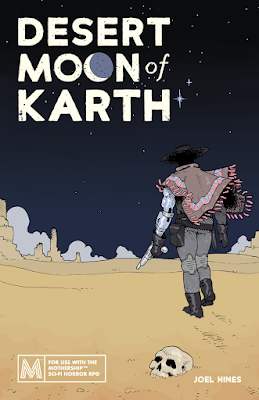 Desert Moon of Karth is a complete scenario for the MOTHERSHIP Sci-Fi Horror Roleplaying Game. Designed and published by Joel Hines following a successful Kickstarter campaign, it is also quite a different scenario in tone and flavour and set-up for the MOTHERSHIP Sci-Fi Horror Roleplaying Game. The genre for the MOTHERSHIP Sci-Fi Horror Roleplaying Game is Blue Collar Sci-Fi horror, most obviously inspired by the films Alien and Outland, and the majority of the scenarios for the roleplaying game are horror one-shots. Not so, Desert Moon of Karth. Instead, Desert Moon of Karth is a sandbox scenario whose genre is that of the Space Western and whose inspirations include Dune, Firefly, Alien, John Carter of Mars, Cowboy Bebop, and The Dark Tower as well as A Pound of Flesh, Ultraviolet Grasslands, and Slumbering Ursine Dunes.

The setting for Desert Moon of Karth is a desert moon on the far edge of the galaxy. It is perhaps best known as being a source of Coral Dust, the addictive blue-grey powder harvested and ground from the bones of the ancient, almost mythic species known as the Wigoy, which have ossified into coral and when ingested stills the aging process and sharpens the mind. There has been a ‘gold rush’ to Karth, a ready flow of would be prospectors willing to brave the harsh environment and the attacks by the infamous Sandsquids attracted by their searches deep into the sand. Access to Karth is limited though via a rickety orbital elevator fiercely controlled by the colonial marines of the Manian Expeditionary Force, as a network of relic orbital satellites shoot down all ships or flying objects—incoming or outgoing. This combination of distance from the centre of the galaxy and inaccessibility means that Karth has gained another reputation—that of a haven for criminals and the galaxy’s most wanted. So the lawless desert moon attracts not just prospectors, but bounty hunters too.

Like any good sandbox—and Desert Moon of Karth really is set on a sandbox—Desert Moon of Karth is a toolkit of different elements. These start with ten highly detailed locations, beginning with the frontier boomtown, Larstown, and then continuing with the Shattered Visage of an angelic man, the Seahorse Mine, the played out location of the first Wigoy prospecting operation on Karth, the Silver Spire, home to a trio of immortal Old People known as the Dawnseekers who research and harvest organs to ensure their longevity, a Ship Graveyard of vessels brought down by the orbital defences, and the Krieg Ranch where the best though-flea-bitten camels for travel across the deserts of Karth can be hired, run by a cranky old woman who keeps her husband on ice in case he can be taken off world for treatment to a grievous injury. Around these locations, four factions dominate Karth. One consists of the Dawnseekers, another the Manian Expeditionary Force, but these are joined by the Valley Rangers, a cargo cult formed around the Lunar Park Service’s bureaucracy and conservationists who abhor technology and seek to maintain the world’s ecology, and the Wigoy themselves, aliens hiding from the other factions with long term aims for the whole of Karth and beyond…

All four factions and the majority of the locations include NPCs with often opposing aims and jobs—both known and secret—that the Player Characters might be employed to fulfil. These, though, are just the start in Desert Moon of Karth, because they are richly supported with table after table of random encounters, motivations, NPCs, rumours, and more! That ‘more’ includes tables of reasons why the Player Characters might have come to Karth, gifts that the Wigoy might grant, worn space hulks, bounty hunters and their possible quarries, oldtech artefacts, what happens when the Player Characters go Wigoy prospecting, and things to be found on bodies, and more.

Although there is potential future mapped out in Desert Moon of Karth, it really only plays out if the Player Characters do nothing. Ultimately then, the Player Characters have a huge opportunity to involve themselves in and influence events on the moon, but this is very much player driven. Once their characters have their motivations—either selected ahead of time or generated using the table in the book, it is very much up to the players to involve themselves in both life and the events going on across Karth.

Mechanically, Desert Moon of Karth is very light, and thus much in keeping with the MOTHERSHIP Sci-Fi Horror Roleplaying Game. There are various stats for the NPCs of course, but they are percentile and easily adaptable, whilst the specific rules cover things such as travel across Karth and prospecting for Wigoy coral—and that is it. What this means is that Desert Moon of Karth is not only very light, but easily adapted to the mechanics of the roleplaying game of the Warden’s choice. Any version of the Star Wars roleplaying games, Cepheus Deluxe, Stars Without Number, Firefly, HOSTILE, and others would work with this supplement with a minimum of preparation, as would many a generic system too.

However, the tone of Desert Moon of Karth may not necessarily match the campaign being run by the Warden if for the MOTHERSHIP Sci-Fi Horror Roleplaying Game, and that likelihood increases if adapted to another Science Fiction roleplaying game. There is horror as you would expect for something written for the MOTHERSHIP Sci-Fi Horror Roleplaying Game, but there is also a weirdness too in the presence of the Wigoy and their secrets, and they might have a profound effect upon a Game Master’s campaign if certain events happen. Nevertheless, the self-contained nature of Karth itself and of Desert Moon of Karth makes it very easy to use. Nor need that be as an addition to an existing campaign. It could be a one-shot adventure, a mini-campaign of its own, or as a source of ideas and tables from which the Game Master can pick and choose elements to add to her own game.

Physically, Desert Moon of Karth is a compact fifty-two page supplement—perhaps a little too big to be really called a supplement. It is well written, it is easy to read, the illustrations are excellent, and the maps, whether of the moon itself, or Larstown or the interior of a Sandsquid are all great.