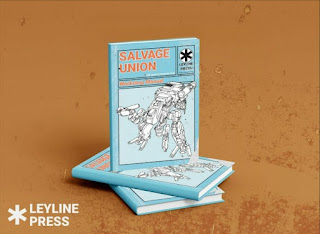 The Salvage Union Beta Quick-Start Guide is an introduction to the new mecha roleplaying game from Leyline Press, best known for its post-apocalypse, post-BREXIT roleplaying game, Shadow of Mogg. Traditionally mecha roleplaying games and mecha games in general are very technical and tactical, of which BattleTech and its roleplaying game, MechWarrior, are perhaps the best known. Not so Salvage Union, which forgoes the tactical and the technical elements of the game play typically found in the genre, in favour of more narrative play. There are different mech types and different weapons and pieces of equipment, as well as different types of mech Pilots in Salvage Union—and in the Salvage Union Beta Quick-Start Guide, but there are no points of armour to scour off in a firefight and keep track off and there is not a detailed resolution system, or even an initiative mechanic! The Salvage Union Beta Quick-Start Guide comes with six Pilots and their mechs, the core mechanics, advice for the Mediator—as the Game Master is known, rules for scrap and salvage, and a sample scenario. All of this in a digest-sided booklet, nearly ninety pages long.

Salvage Union and the Salvage Union Beta Quick-Start Guide takes place on a colony world in the far future which has been heavily scarred by the effects of global warming, deforestation, pollution, nuclear fallout, and several conflicts. The luckiest and the wealthiest live in Corporate Arcologies—each one run by a different corporation, but most are Wastelanders, living in scattered settlements or in the case of a relative few, as members of self-sufficient communities living in gigantic mechs called Union Crawlers. From these roam bands known as Salvage Unions, made up of workers, salvagers, Pilots, and free spirits, each Piloting their scrap-built or former corporate mech, in search of scrap and salvage to keep their machines and the Union Crawler running, and even upgrade their machines. To some the Salvage Unions are folk heroes, to the corporations they are greedy opportunists and recalcitrant rebels, part of the growing Resistance against the corporations taking control of the planet. In Salvage Union and the Salvage Union Beta Quick-Start Guide, the Player Characters are part of one such Salvage Union.

At the core of Salvage Union is a Pilot and his Mech. Each Pilot has a Profile, three Stats, three pieces of equipment, and three Abilities. The Profile includes a callsign, background, ideal, flaw, keepsake, and motto, whilst the three Stats are Health, Ability Points, and Stress. Health is how much physical damage a mech Pilot can suffer, Ability Points are expended on Abilities, and Stress is how much mental damage he can take, which can be generated via a player Pushing his Pilot, using certain Abilities and items of equipment. Health, Ability Points, and Stress are the same for each of the six pre-generated Pilot in the Salvage Union Beta Quick-Start Guide. For example, the Engineer archetype has the Callsign of Twitch, the Freelancer Background, her Ideal is Pragmatism and her Flaw is Judgemental, her Keepsake is a Red Toy Car, and her Motto is ‘Call me, or screw it up yourself’. Her three pieces of equipment are Riveting Gun, which when the safety is switched off, can inflict damage, a Wrench that can be used as a melee weapon, and a Portable Arc Welder. Her three Abilities are ‘If I cut this wire…’, ‘Field Repair’, and ‘Talk Shop’. ‘If I cut this wire…’ allows her to pinpoint a System or Module on a Mech and disable it. This can be done in person and requires her player to expend two Action Points, or aboard her Mech with a Welding Laser, in which case it costs two Energy Points to use. Similarly, ‘Field Repair’, which enables her to repair a damaged Module or System, and costs either two Action Points or two Energy Points depending whether she is conducting the repairs in person or in her Mech. Lastly, ‘Talk Shop’ just costs one Action Point to use and means she can engage in conversations other Mechanics, Salvagers, workers, and the like, and they will share information with her.

A Mech has several Systems, its hardware and weapons, and Modules, its software, electronic warfare systems, and the like, as well as three ratings for its Spec—Structure Points, Energy Points, and Heat Capacity. Structure Points are how much damage it can take, Energy Points are expended to power a Mech’s Systems and Modules, and Heat Capacity is how much Heat it can generate before a Reactor Overload Check is required and the Mech either shuts down, loses Systems or Modules, or simply blows up! For example, the Engineer’s Mech is a Type 43 ‘Magpie’, a Medium Class worker Mech developed by the Stefanus Corporation. It features Hot Swap Universal Mounts for easy change of Systems and Modules, and its Systems include a Rigging Arm, Locomotion System, and Welding Laser, which when at Engaged range, can be used a weapon. Other Systems include ‘Repair’, allowing the Pilot to repair a Mech or Structure for two Structure Points—even in combat, and ‘Mass Field Repair’, an out-of-combat which enables the Pilot to repair up to ten Structure Points across any number of Mechs. Both ‘Repair’ and ‘Mass Field Repair’ cost two Energy Points to use. The Type 43 ‘Magpie’ also has a Mini Mortar, an Emergency Hatch, and a Transport Hold. Its Modules include a Comms Module and an EM Shield Projector, which can be projected around itself or another Mech and provides protection against lasers and ballistics. It costs two Energy Points to use and requires a roll on its own table to determine its effectiveness.

There are six pre-generated Pilots and their Mechs in the Salvage Union Beta Quick-Start Guide. They include Hauler, who can intimidate her enemies or make a deal with them and her Mk8 ‘Atlas’, a heavy supply Mech which can also lay a minefield; Scout, a tracker and sniper, whose agile ‘TC40’ Gopher can track and survey targets; Soldier Pilots a GCC21 ‘Brawler’, a combat Mech; Hacker, whose MCS-1337 ‘Mantis’ Mech is designed for stealth and hacking into enemy Mechs; Engineer and her Type 43 ‘Magpie’ repair Mech; and Salvager with his BG-288 ‘Jackhammer’, a sturdy mining Mech intended to survey deep underground, excavate rock, and survive a cave-in! Together, these six are all different and they nicely showcase the range of characters and Mechs possible in Salvage Union.

Mechanically, the Salvage Union Beta Quick-Start Guide and thus, Salvage Union, is built around a small set of tables, upon which a player will roll a twenty-sided die. There are no bonuses applied to the roll, but simply an outcome. On a one, the Player Character suffers a ‘Cascade Failure’, meaning that not only has he failed, but has done so spectacularly, or something else has gone wrong. A result of a two to five means a simple ‘Failure’, whilst that of six to ten, means the Player Character has succeeded, but with a consequence. A roll of eleven to nineteen is a ‘Success’ and means that he has succeeded without any penalties, and a roll of a twenty means he has ‘Nailed it’ and succeeded beyond his expectations.

A Pilot can push both himself and his Mech. Pushing his Mech generates Heat and too much can result in a roll on the Reactor Overload Table to see what happens, but it also allows a player to re-roll any check involved with his Pilot’s Mech. Venting Heat is possible, but requires the Mech to be completely shutdown for ten minutes and is therefore vulnerable. If a Pilot pushes himself, he generates Stress and can result in a roll needing to be made on the Stress Overload Table. Similarly, resting for ten minutes will get rid of all of a Pilot’s Stress.
Other tables cover Critical Damage to a Mech and Critical Injury to a Pilot, and there are Modules and Systems which have their own tables, but Salvage Union is not much more complex than this. This is because it is actually a resource management roleplaying game—not a complex one, but a resource management roleplaying game nonetheless, with players keeping track of Energy Points and Action Points for their Mechs and Pilots respectively, and deciding where and when to use them. Although both Stress and Heat can be reduced during play, Action Points and Energy Points cannot, Pilots and Mechs needing to speed a week back in their Union Crawler to recover both. This shifts play in Salvage Union to more of a narrative structure, with even combat initiative being handled narratively rather than via random dice rolls, and makes knowing when to use a System, Module, or Action much more important. Similarly, knowing when to Push a Pilot or a Mech for that all important reroll is also important, and is effectively the nearest thing to a skill system that Salvage Union has.

The Salvage Union Beta Quick-Start Guide also includes rules for salvaging and what can be done with salvage, whether that is paying for Downtime aboard the Union Crawler, making repairs to Mechs, or even building new Modules and Systems and upgrading a Mech. There is good advice for the Mediator too, especially on game structure and handling consequences—especially since this is a quick-start. The Mediator is also provided with sample enemy Mechs, a glossary of terms, and several table of salvage. With a bit of care, the Mediator could even design a few Mechs of her own to field against those of the Player Character Pilots.

Lastly in the Salvage Union Beta Quick-Start Guide, there is a short scenario. This is ‘The Downing Of The Atychos’ and sees the Player Characters tracking down a corporation air transport ship which has crashed. It belongs to Evantis Industries, which manufactures experimental heavy mechs and weaponry, and that means potentially good salvage. Unfortunately, the transport has crashed in the city ruins of Hope Falls, thought to be home to outlaws, and there are going to be rival Salvage Unions interested. The Pilots will need to fight and possibly negotiate their way across the area and conduct a survey in order to locate the downed transport, facing some interesting threats and situations along the way. Several fun NPCs are provided too, as well as some different Mechs. It is a decently done adventure which should take a couple of sessions to play, but could easily be developed by the Mediator to run a mini-campaign if the players and their Pilots wanted to explore the area further and scour it empty of salvage.

Physically, the Salvage Union Beta Quick-Start Guide is a decently presented digest-sized book, whose cover is reminiscent of a Haynes manual. Inside, the artwork varies in style, from fully painted vistas to line art drawings of the Mechs with cartoon-like illustrations of the pre-generated Pilots in-between. The layout is clean and tidy, and the quick-start is easy to read through.

The Salvage Union Beta Quick-Start Guide does an excellent job of introducing Salvage Union and how it is played. It not only comes with everything necessary to play its scenario, but a bit extra with which the Mediator can expand play beyond the scope of the scenario, providing a broader look at the core game. Some adjustment is necessary in terms of play since although this is a Mecha-style game, as it emphasises narrative play rather than tactical, for both the roleplaying and the Mech combat. Overall, the Salvage Union Beta Quick-Start Guide is an impressive introduction to Mecha-style games and settings, but without resorting to a lot of stats and wargames style play.

Salvage Union is currently being funded via Kickstarter.