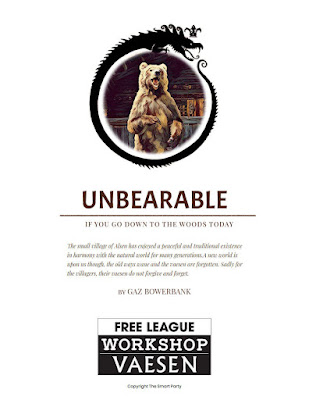 For fans of Vaesen – Nordic Horror Roleplaying, the roleplaying game of investigative folklore horror set in nineteenth century Scandinavia, based on Vaesen: Spirits and Monsters of Scandinavian Folklore as collected and illustrated by Johan Egerkrans, there is just the one supplement supporting it—for the moment. However, for Vaesen and other titles from Free League Publishing, there is the Free League Workshop. Much like the DM’s Guild for Dungeons & Dragons, this is a platform for creators to publish and distribute their own original content, which means that they also have a space to showcase their creativity and their inventiveness, to do something different, but ultimately provide something which the Game Master can bring to the table and engage her players with. Such is the case with Unbearable.

Unbearable is written by one half of the hosts of the podcast, What Would Smart Party Do?—the other half designed King of Dungeons and presents an engaging and entertaining mystery with a dilemma or two. It could easily be played in a single session, perhaps two at most, and would make a good option for a convention scenario just as it would for the Game Master’s own campaign.

In Vasen, the Player Chaarcters are members of the Society, which is based in Castle Gyllencreutz in the city of Upsala and which is dedicated to the study and understanding of the vaesen. Thus its members look for opportunities to investigative signs of Vaesen activity and so at the start of Unbearable, they find an interesting article in an issue of Fortean Times. This is a report about Alsen, described as the unluckiest village in Sweden, having recently been beset by a rash of inexplicable events. These include bear attacks, mystery fires, and disappearances to the point that it has gained a certain notoriety amongst tourists looking for a different sort of attraction. Notably though, the journalist for the Fortean Times who was reporting on the village has also gone missing. For the members of the Society, the question is, what exactly going on in Alsen and where is the missing journalist?

Unbearable is a classic ‘village in peril’ scenario and as such brings together some of its classic clichés. Thus we have a gossipy innkeeper’s wife who leaves him to do all the work, a drunken priest who is losing his faith and does not understand what is going on, and a useless mayoral figure, and nature itself which seems to be attacking anyone and everyone in Alsen, let alone the village itself. However, just because the scenario has an almost identikit structure, it does not mean that it is either a bad scenario or a poorly put together scenario. In fact, it is really quite an enjoyable scenario, with the Player Characters having to sort through or interact with the clichés in order to get to the truth of the matter—and the Game Master hamming up the old standards for she is worth! However, there is more to Unbearable than that, and diligent investigation will reward the Player Characters with a wealth of clues as to just not what is going on, but also how to stop it. This includes a great scene involving one or more Player Characters having to work the smithy at midnight under very ghostly light and all of them getting to the home of the local bear trapper who happens to have set all his traps out roundabout. All this is against a background of growing strangeness—fungus blooming the wooden foundations of buildings, bear attacks, wooden objects throughout the village sprouting leaves, the local vicar going off in a drunken fury, and more.

Ultimately, the Player Characters will have a showdown with the supernatural cause of the problems and deaths in Alsen, hopefully having gained an advantage or two from their enquiries in the village. The primary one presented in Unbearable is physical, and although options are discussed, the emphasis is firmly on the physical resolution. The options discussed cover more peaceful means of solving the scenario, but they are not explored in terms of game play, and that is a shame. The reasoning here is that the inhabitants of Alsen are going to want an end to the situation in the village and direct confrontation is the obvious means of achieving that, and it is a perfectly understandable motivation. However, players being players, they may not necessarily want to resort to a combative resolution, and so a more detailed discussion of the other options would have been useful for the Game Master.

Physically, Unbearable is cleanly laid out and easy to read. It comes with maps of Alsen and the surround area, as well as floor plans of the inn and the article from the Fortean Times as a handout. Both maps and handout are decently done. Also well done are the thumbnail portraits for the scenario’s eleven NPCs, such that it is a pity that the PDF does not come with a sheet with their names and portraits to show to the players. The artwork is also very nicely done and chosen.

There is a lot to recommend Unbearable. It is nicely presented,  accessible, and self-contained scenario with a decent nature versus man plot and plenty of NPCs to interact with and clues to find. It is also easy to move to another location—though that location should have bears!—and easy to add to an ongoing campaign. Unfortunately, the lack of detail for other options for resolving the situation in Alsen means that it cannot be described as unbearably good. Which is disappointing, because if it did support those options it would have been worthy of that terrible pun. Nevertheless, Unbearable is solid scenario, offering a good mix of investigation and action.