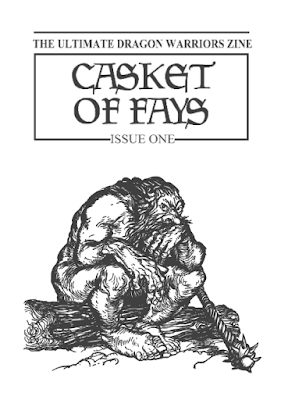 Fanzines are fundamentally a means and a platform to support a publisher’s and authors’ favourite roleplaying game. This can be in the good times and the bad, when the roleplaying game a fanzine supports is in print, and when it is not. And when it is not, a fanzine can become the focal point for a roleplaying game’s fans, a way for which they can maintain their interest in the game. This can be whether the fanzine is in print or electronic format. This is the case with Dragon Warriors and Casket of Fays. Dragon Warriors, the fantasy role playing game system published by Corgi Books in the mid-eighties originally as a series of paperbacks, then in the noughties by Magnum Opus via Mongoose Publishing, and more recently by Serpent King Games, as a series of standard-size books. Casket of Fays is a fanzine published by Red Ruin Publishing [https://www.redruin.org/], a fan-community-driven community, and available for free as a PDF.

Published in July, 2020, Casket of Fays #1 – a Dragon Warriors RPG fanzine is a short fanzine, running to just twenty pages. In that limited space it packs in a new monster or two, a preview, new weapons, a new profession or more. Short of an adventure, or two, this is a generally pleasing little medley of content which a Game Master can use in her campaign. The issue opens with Wayne Imlach’s ‘Mere-Trolls’, first of two monster types in the issue. The Mere-Troll is a riverine hunter, humanoid, but reptilian and bestial, which prefers to lair in the muddy waters of the banks of rivers or lakes. They are not however necessarily a danger to most, whereas their wives, or ‘Mere-Hags’, are. Anyone forced to drink the blood of a Mere-Troll or Mere-Hag becomes subservient to them, but being more intelligent and cunning, only the Mere-Hag takes advantage of this. Which means that if adventurers are forced to confront such a creature, she will be guarded by many other beasts!

‘Welcome to the Thousand Islands’ by Damian May is an ‘Extract from the Journal of Damprong Kak of Batuban, Captain of the junk Śakra.’ and a preview for then—and still—forthcoming supplement, Thousand Islands, from Ambula in Fabulam. It is readable, but bereft of context, it simply just is, and without that context, it just feels as if it is taking up space. More useable though are Damian May’s ‘Weapons of the Thousand Islands’, which describes a trio of blades used in the region, such as the Mandau, a heavy chopping sword often with a hilt carved from human bone and used in head-hunting ceremonies and the Karambit, a knife whose blade is shaped like the claw of a tiger and whose hilt has a finger ring which can be used to punch an opponent and prevents the user from being disarmed—though this is jarring when such attempts are made.

Even more useful though, are the entries in Lee Barklam’s ‘A Spell and a Nasty Magical Item’. The spell is Moonthread, a Sorcerer spell which creates a strand of the moon’s light into a thread as light as silk, but strong as heavy rope. It cannot be cut, remains as long as there is moonlight (or the light of the Moonglow spell), and vanishes if exposed to sunlight or touched by a magic weapon. A nice simple spell, which although utilitarian in nature, has some nice flavour and a couple of wrinkles or two. The nasty magical item is nasty, the Scarred Pearl, a short, plain silver rod topped by a heavily scarred pearl, which scarred again with a sharp implement and that scar inflicted permanently on the face of the user’s target, which reduces their looks. It lives up to its description and would be a perfect addition to any villain jealous about the looks of others.

‘Chaubrette: The Barony of Séverac’ by Greg Dzi provides an overview of the Barony of Séverac which lies between the cities of Méore and Quadrille on the Mergeld Sea. It is dominated by Baron Enguerrand backed by the Merchant Guilds of Varnais, known as the Sleepless Port, whose fleets of ships trade far and wide. It also describes the city, along with ‘le Chancre’ or ‘Canker’, the maze of slums and hovels that make up the shanty town outside its walls, in detail enough that a Game Master could draw a simple map, perhaps the only thing that is missing from the article. Wayne Imlach also gives a write-up of ‘Bödvar Bjorn’, a great hero of the Mercanian sagas, a famed sea wolf, berserker and archer of unmatched ability. There are not full stats for him, but again enough for the Game Master to create him should she want to include him as an NPC.

‘The Light Elementalist’ by James Healey and Joshua Roach details a new Profession. The Light Elementalist follows one of the two non-traditional Elemental Paths, the other being Time. They originally drew their power from seven Sun Orbs, but one has been stolen and used by the Priests of the True Faith and two have been bonded to Darkness. The Profession feels underwritten, but is supported with a set of ten increasing powerful spells, such as Flare, which creates a bright light in the sky which blinds everyone within a mile; Sunbeam which inflicts a ray of pure light at a target; and Purge, which removes all diseases and poisons from the subject of the spell. There is a good mix of spells, some intended to heal, others not, which brings spells normally associated with healers and clerics to the sorcerer type of Profession.

Last in the first issue of Casket of Fays is ‘The Tatzelwurm’ by Brock. This is a serpent with the head and forelegs of a cat, which is a minor danger encountered in the northern mountains of the Coradian mainland. It has a poisonous bite and can even exhale the poison. It is a colourful enough creature, but does not come with suggestions as to how to use it since it only appears to prey on lone villagers, shepherd, and the like.

Physically, Casket of Fays #1 is plain and simple. The few illustrations are decent, but like any amateur publication, it could always benefit from a few more. More useful perhaps would have been an extra map in one or two places. The editing is decent, but overall, the issue feels somewhat underdeveloped. This is the first issue though and to an extent, that is to be expected. And of course, Casket of Fays #1 is free to download, so it is very much a labour of love as opposed to be being a commercial venture. For the Game Master running a fantasy campaign—whatever the setting or rules system—Casket of Fays #1 is worth perusing for ideas given that it is free. For the Game Master of a Dragon Warriors campaign, Casket of Fays #1 is definitely worth perusing for ideas, though she may have to develop the content further herself in order to bring some of it to the table..