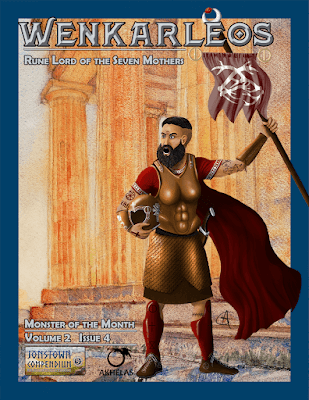 What is it?
Wenkarleos presents an NPC, his entourage, and associated cult for use with RuneQuest: Roleplaying in Glorantha.
It is a thirty-one page, full colour, 2.23 MB PDF.
The layout is clean and tidy, and its illustrations good.

Where is it set?
Wenkarleos is nominally set in Tarsh and Sartar, but the NPC and his entourage can be encountered almost anywhere the Game Master decides.

Who do you play?
No specific character types are required to encounter Wenkarleos. Lunar Tarshites, Old Tarshites, and adherents of the Seven Mothers can have interesting interactions with Wenkarleos.

What do you need?
Wenkarleos requires RuneQuest: Roleplaying in Glorantha. In addition, A Rough Guide to Glamour may be useful as an introduction to Lunar culture and politics, The Glorantha Sourcebook for recent history, and potentially the sourcebooks on Lunar Tarsh and Old Tarsh available for previous versions of the roleplaying game.
What do you get?
The second volume of ‘Monster of the Month’ presents not monsters in the sense of creatures and spirits and gods that was the feature of the first volume. Instead, it focuses upon Rune Masters, those who have achieved affinity with their Runes and gained great magics, mastered skills, and accrued allies—corporeal and spiritual. They are powerful, influential, and potentially important in the Hero Wars to come that herald the end of the age and beginning of another. They can be allies, they can be enemies, and whether ally or enemy, some of them can still be monsters.
The fourth entry is Wenkarleos, which describes a Rune Lord of the Seven Mothers. The ‘Gold-Giving Son of Gartred’, Wenkarleos of Furtherest is the head of the Gartredi Clan in Lunar Tarsh, a fierce supporter of King Pharandros and stalwart opponent of the Fazzursons faction in the civil war in Tarsh. He dreams of building a ‘Greater Tarsh’, but has been tasked with finding allies to support his side in the civil war. A former hoplite file leader and captain serving under the famous General Fazzur Wideread, he is rarely without a small cohort of troops, whom he trains hard to fight together, and whilst a good swordsman himself—though it helps that one of his bound spirits is an ancient spirit of kopises, he a skilled tactician and magician. In addition, like all Rune Lords, he is accompanied by his own retinue who include a loyal soldier, his Orlanthi lover and spy, and a Lunar sorcerer, who serves as his war caster. All four are fully detailed, including their equipment, their spells, and any allied or bound spirits. Some of these will prove entertaining for the Game Master to roleplay, such as ‘Abeladrus’ Tankard’, occupied by the spirit of a former labourer who possesses defeated opponents and drives them to drink and the Mistress of Unconditional Desires drives her victims mad through visions and sensations as she reveals the unconditional love and acceptance of the Lunar Way.
As well as presenting Wenkarleos and his retinue, the supplement discusses his tactics—particularly the way in which he has drilled his soldiers with certain set manoeuvres, and his extensive use of magic, including the use of the Multispell Rune spell, spell matrix enchantments, and high storage of personal POW, often donated by his loyal followers, who are in turn handsomely rewarded. Both the use of the Multispell Rune spell and spell matrix enchantments are fairly complex, so will need careful study upon the part of the Game Master to use effectively in-game.
It also suggests how Wenkarleos can be used in-game, whether as an ally or an enemy, potentially serving as a source of conflict with Tarshites—Lunar or not, especially if like Vostor from The Broken Tower, has the Passion of Hate (King Pharandros). Thus he can be used to pull the Player Characters into the Tarshite Civil War, and thus later, events during the early years of the Hero Wars and the rise of Argrath Whitebull. There is potential here for a long-term campaign in which as allies or agents of Wenkarleos, the Player Characters will be facing agents of Argrath Whitebull’s allies in the Tarshite Civil War. Either way, Wenkarleos is best introduced early on in a campaign. Of course, an Orlanthi or Sartarite campaign would more likely to see Wenkarleos as the enemy, and that may preclude his use in some campaigns.
Lastly, two adventure seeds are included, though both use as an enemy rather than an ally. A new magical item, Philigos Medallions, is also described. These were made by King Phargentes of Tarsh and grant those attuned with them the Sense Assassin skill.
Is it worth your time?
Yes—Wenkarleos presents a potentially interesting ally or enemy who can be used to draw a campaign into the politics of Tarsh and the early years of the Hero Wars, and so provide some time in the spotlight for any Tarshite or Seven Mothers-worshipping Player Characters.
No—Wenkarleos presents connections to Tarsh which may draw a campaign set in Sartar too far north and as yet, the politics and situation in Tarsh in the period when RuneQuest: Roleplaying in Glorantha is set, remain relatively unexplored.
Maybe—Wenkarleos presents a potentially interesting ally or enemy, whose politics may radically differ from the Player Characters or the campaign, and who may just a little too complex in terms of his magic to use easily.
Posted by pookie at 18:00