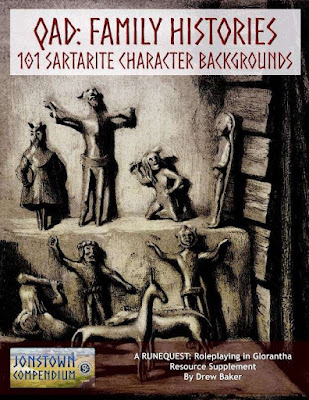 What is it?
QAD: Family Histories – 101 Sartarite Character Backgrounds presents one-hundred-and-one backgrounds for characters from Sartar created using the character creation rules found in RuneQuest: Roleplaying in Glorantha.
It is a one-hundred-and-ten page, full colour, 4.78 MB PDF.
The layout is clean and tidy, and whilst the only illustration, ‘Ons voorgeslacht in zijn dagelyksch leven geschilderd’, is on the front cover, it is appropriate.
Where is it set?
QAD: Family Histories – 101 Sartarite Character Backgrounds is set in Sartar in Dragon Pass.