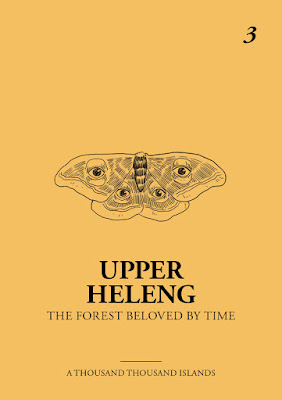 Upper Heleng: The Forest Beloved by Time is a little different. Penned by Zedeck Siew—author of Lorn Song of the Bachelor—and drawn by Munkao, it is the third title published by the A Thousand Thousand Islands imprint, a Southeast Asian-themed fantasy visual world-building project, one which aims to draw from regional folklore and history to create a fantasy world truly rooted in the region’s myths, rather than a set of rules simply reskinned with a fantasy culture. The result of the project to date is eight fanzines, plus appendices, each slightly different, and each focusing on discrete settings which might be in the same world, but are just easily be separate places in separate worlds. What sets the series apart is the aesthetic sparseness of its combination of art and text. The latter describes the place, its peoples and personalities, its places, and its strangeness with a very simple economy of words. Which is paired with the utterly delightful artwork which captures the strangeness and exoticism of the particular setting and brings it alive. Barring a table of three (or more) for determining random aspects that the Player Characters might encounter each entry in the series is systemless, meaning that each can be using any manner of roleplaying games and systems, whether that is fantasy or Science Fiction, the Old School Renaissance or not.

The first, MR-KR-GR The Death-Rolled Kingdom, described the Death-Rolled Kingdom, built on the remains of great drowned city, now ruled by crocodiles in lazy, benign fashion, they police the river, and their decrees outlaw the exploration of the ruins of MR-KR-GR, and they sometimes hire adventurers. The second, Kraching, explored the life of a quiet, sleepy village alongside a great forest, dominated by cats of all sizes and known for its beautiful carvings of the wood taken from the forest. The third in the series, Upper Heleng: The Forest Beloved by Time, takes the reader, if not into this forest, but into a forest.

Stepping into the forest is like stepping into the past. Time seems to pass differently there, and so it is in Upper Heleng, though no native would call it that. Beyond the two great trees which mark its most obvious entry—one dead, the other never not in flower, time passes faster for objects not of the forest. They rot, they rust, teeth fall out. It is almost as if the forest is rejecting such modernisms. Squirrels appear to chatter and gossip—if you listen. A wheezing mouse deer asks for help—it has a woman’s face. Take care lest the Leeches stalk you and steal something from more important than a mere possession—a hand, a child not yet born, a skill, your favourite song… The forest is married to Time and has given birth to many gods who make their home in her arboreal embrace. Each has their own time, some of which are embraced by the natives, some of which are not. The Leech is her eldest, who governs memory, loss, and entropy, and who defends his mother when necessary and whose manifestations stalk and steal from intruders. The Bee is her third daughter, a gibbon-shaped hive of bees whose presence indicates that harvest is here. The Moth is the youngest and the oldest, and governs death for all who die in the forest, able to see out of the spots on the moth he has for a face—and out of all spots of all moths. Anyone who died in the forest may be asked questions through the Moth for he remembers them all, but for a price.

The way into the forest—and Upper Heleng: The Forest Beloved by Time—is through a guide. The girl, Wingseed, is keen to take the Player Characters in—though Dangles, her father now living in a dog’s (and thus a god’s) shape worries greatly for her, and will advise them to eat the food grown inside to lessen the effects of time whilst under the canopy. The Player Characters may encounter Sadushan San Di, who quests for the Leech who defeated Sadushan San Di’s liege-lady, Queen Qaidun, and stole her face, but who knows which of the many Leech Spawn now bears that visage? Or Sri Jahisha, itinerant swordfish who wishes to see the un-oceaned world and is borne upon the back of fisherman blessed with magic. The forest nomads with their strange ways, but kindly manner, treating outsiders like children who know no better… Such as Tittertit, the elderly camp chief who does not give a damn and whose armful of monkeys know spells and Scoffysyrup, a woman addicted to the beakroot which is transforming her into a bird. She wants to be free to fly and wants more, but her campmates refuse to gather it. Perhaps the Player Characters have come to aid Sadushan San Di or to purchase trade goods, like the Ghost Antler, infused with the beast’s final instincts at death, the phantom vines which are found hanging in the air and can be woven into nets capable of entrapping the incorporeal, or Quick Honey, the mercury liquid which grants a day’s invulnerability and unerring action in return for the ultimate price, but which all of the gods across the Thousand Thousand Isles want at their table.

For the Game Master there are tables to determine random encounters in the forest and encounters with the forest people. There is also an insert which provides another pair of tables. Both are ‘die-drop’ tables, one a name generator for the people of the forest which with a roll of six dice also generates a personality too. The other is a lay of the land of the forest, a collection of places, the fall of the dice determining the elements of the location where the Player Characters are, or are going, the Game Master building the descriptions from where the dice land. This is not necessarily a map generator, since the land can change, rivers squirm to elsewhere, paths wither and disappear. Essentially, the forest grows and changes, but remains the same.

Physically, Upper Heleng: The Forest Beloved by Time is a slim booklet which possesses the lovely simplicity of the Thousand Thousand Isles, both in terms of the words and the art. Together they evoke visions of a very different world, inspired by forest taboos and Bateq egalitarianism, and of a very different fantasy to which a Western audience is used, but the light text makes it all very accessible as the art entrances the reader. However, Upper Heleng: The Forest Beloved by Time is not easy to use, the forest crawl being far away and not necessarily easy to reach, but worse, it is difficult to engage the Player Characters with it until they reach its eaves. The Game Master will need to work hard to create motivations and drives for them to travel to Upper Heleng, and that is its biggest weakness. It has the hooks—both ethnographic and cosmological—but it is a matter of getting the Player Characters there.

Upper Heleng: The Forest Beloved by Time has not quite the charm of the previous MR-KR-GR The Death-Rolled Kingdom or Kraching, but this does not mean that it is not without appeal. Once again, Upper Heleng: The Forest Beloved by Time is beguilingly simple and exquisitely enticing in its presentation of a bucolically strange, but seemingly tranquil land far away from whatever constitutes the main hub of the world and its action.

The great news is that is Upper Heleng: The Forest Beloved by Time, MR-KR-GR The Death-Rolled Kingdom, Kraching, and the others in the Thousand Thousand Isles setting are now available outside of Malaysia. Details can be found here.