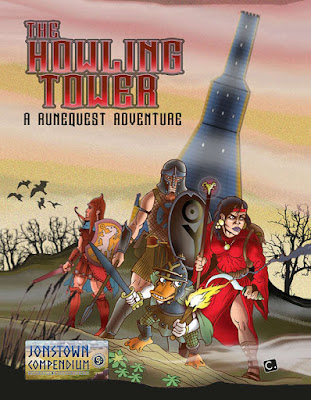 What is it?
The Howling Tower is a scenario for use with RuneQuest: Roleplaying in Glorantha. It is based upon a scenario originally written in 1992 for use with RuneQuest III.
It is a thirty-four page, full colour, 35.07 MB PDF.
The layout is clean and tidy, and the artwork bright and colourful, almost cartoonish in places.
Where is it set?
The Howling Tower is set in and around the Upland Marsh in Sartar in Dragon Pass.

What do you need?
The Howling Tower requires RuneQuest: Roleplaying in Glorantha and the Glorantha Bestiary. In addition, RQ Adventures Fanzine #2 will be useful for an NPC who may be of interest if the Player Characters want more information about the Empire of Wyrm’s Friends. Tales of the Reaching Moon No.19, Wyrm’s Footnotes No.15, and Sartar: Kingdom of Heroes may also be of interest to the Game Master, but are absolutely not necessary to run The Howling Tower. The scenario Duck Tower is also referenced, but again, not necessary to play.
What do you get?
The Howling Tower details a location in the Upland Marsh and the journey to get there. The tower is noted by those who venture into the marsh and those who live not far from its edge for the great howls of pain which seem to emanate daily from its walls. The Player Characters will be drawn to the tower after finding a map dating back to the time of the Empire of Wyrm’s Friends which shows its location. The map also has a verse on the back in Auld Wyrmish which suggests that further knowledge or treasure can be found within its walls. The map should ideally belong to a Lhankor Mhy priest or scholar, whether that is a Player Character or an NPC willing to hire the Player Characters as protection. If none of the Player Characters can read Auld Wyrmish and so translate the verse, the scenario suggests two alternative solutions.
Travel to the Upland Marsh is relatively easy, the Player Characters going via Runegate to the village of Two Sisters. There they can pick up rumours and perhaps even hire a guide, Erasthmus Quark, a Humakti Duck, who could easily become a replacement Player Character. The trip into the Upland Marsh will be unpleasant, not only because of it being soggy underfoot and the fetid stench of the marsh, but also because the party is likely to run into insect swarms, snakes, ghouls, zombies, and worse. The journey to the tower will probably take a day or two at the most—the scenario is not clear about the route taken—and the likelihood is that the Player Characters will be relieved to get there. The Upland Marsh is a vile place with numerous environmental hazards as well as creatures.
The Howling Tower itself is a four-storey tower, relatively small, but long abandoned and dilapidated. The tower contains a number of nasty traps, though some of their potency has waned over the years, but only two encounters with monsters. Both are still deadly, and their nature is such that their Armour Points are very high, so unless the Player Characters have Rune magic to back them up, they will find them difficult to defeat. The major foe encountered in the scenario is fairly complex in comparison to most monsters, and the Game Master will need to give its description a very careful read through before having the Player Characters face it. The rewards to find in the Howling Tower may not be obvious, especially for players new to Glorantha, but they are present, and for the most part, they favour users of Sorcery.
The Howling Tower feels a little bit like an ‘Old School’ dungeon crawl, but one for RuneQuest and Glorantha—though a very short one. It is nicely detailed though, with plenty of flavour and a little bit of history to make it interesting as well as potentially deadly. It is easy to add to a campaign, especially if there is a Lhankor Mhy priest or a Humakti warrior in the party. In addition, The Howling Tower includes a description of the village of Two Sisters and five NPCs who might be found there or nearby, who can be used as NPCs or even Player Characters. This includes an adventurous Magisaur!
Is it worth your time?
Yes—The Howling Tower presents a relatively short excursional and exploration scenario that works well if the party includes a Lhankor Mhy priest or a Humakti warrior, or both amongst their number.
No—The Howling Tower is harder to run if the party does not include a Lhankor Mhy priest or a Humakti warrior, or both amongst its members and perhaps the Game Master does not want to take her campaign into the Upland Marsh.
Maybe—The Howling Tower involves messing about in marshes and getting overly involved in dangerous history, and perhaps the Player Characters are not quite ready for that, but the scenario is relatively short, easy-to-prepare, and potentially an introduction to Ducks.
Posted by pookie at 12:00