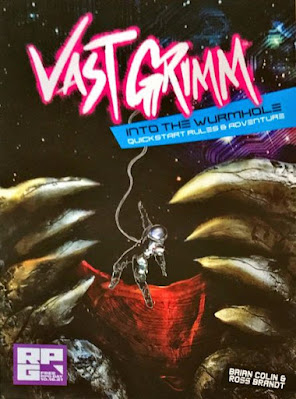 Into the Würmhole is a disgusting adventure set in the Vast Grimm universe, a standalone, art-filled, punk-fuelled Old School Renaissance role-playing game about the few humans remaining in a universe being consumed by growing parasitic würms. Some time in the future, the Earth has been shattered, carved up, and gnawed upon by würms such that all remains are vestiges. All that remains of humanity resides in habitats and spaceships, scavenging what it can, surviving the best that it can, everyone hoping that they will not fall prey to the infestation that will turn them into one of the würms, that they can find some kind of surviving civilisation, or perhaps they can find escape via the Gate of infinite Suns. In ‘Into the Würmhole’, the Player Characters are members of a Legion, investigating an urgent distress call from inside a dark and foreboding asteroid… Into the Würmhole includes every necessary to play—an explanation of the rules, the short four-page ‘Into the Würmhole’ scenario, and four ready-to-play pre-generated Player Characters.
Published by Infinite Black, Vast Grimm shares its mechanics and much of its tone with Mörk Borg, and indeed they are compatible, although not from the same publisher. Thus it is player-facing in that the players do almost all of the dice rolling, a test requiring a player to roll equal to, or greater than, a given Difficulty Rating, typically twelve, usually modified by the appropriate attribute—either Strength, Agility, Presence, or Toughness—which ranges from -3 to +3. Thus in combat, a player will roll for his character to avoid being attacked as well as his character making an attack. A Player Character also has a Tribute, for example, Grimm Reaper enables the character to command Grimm (Grimm those infected by parasites and würm things) for a number of rounds, whilst Strength of 1,000 Würms lets the character increase the strength of another character or creature. Tributes are the equivalent magic in Mörk Borg and cost Neuromancy Points to use, whereas Skillz, which represent skills and other abilities. For example, ‘Schwarze’s Stoogie’ is a mechanical cigar that always tastes like a fine Cuban and once per day its ash can be flicked at an enemy to blind him for a short while, whilst ‘Last to Die’ means that the character is weak and puny, never seen as a threat, and always the last to be attacked! Lastly, a Player Character has a number of Favours each day, which might grant maximum damage, allow a reroll of any dice, reduce damage taken, neutralise a critical strike or a fumble, or lower the Difficulty Rating of a test.
The rules are explained in a single page of a small booklet, so there is a certain brevity to them. However, anyone with any roleplaying experience should have no difficulty picking one of the pre-generated Player Characters and beginning play, whilst the potential Game Master will need a little experience under her belt. Both will find Into the Würmhole easier to play or run if they have any experience with Mörk Borg—or any of the more minimalist retroclones. In fact, an experienced Game Master could easily pick up Into the Würmhole, read through it in five minutes, brief her players how everything works, and be running the scenario in ten.
The scenario, ‘Into the Würmhole’ sees the Player Characters descend into the carcass of a dead Würm which had burrowed deep into an asteroid. This is in answer to a distress call from another Legion, and inside the decaying corpse of they will encounter former members of the Legion turned Grimm, a variety of foul stenches and miasmas, and giant Leukocytes and Immunigoblins—humanoid defence mechanisms that attempt to immobilise any intruders, such as the Player Characters, so that the body of the Würm can digest and decompose them.
To play the ‘Into the Würmhole’ scenario, Into the Würmhole provides a quartet of pre-generated Player Characters. These include an Emo|Bot, a former communications ’bot which suffers from kleptomania, but which can access any computer; a Treacherous Merc; a Lost Technomaniac, who is accompanied by a Borg Bat, a cybernetic bewinged rat who acts as a scout; and a Soul Survivor. These are a mostly rotten bunch, intentionally so, desperate survivors, attempting to get by, make it to the next mission…
If there is an issue with Into the Würmhole, it is that it does on occasion refer back to Vast Grimm. So it suggests referring to the rules for further random monsters and it does not include any rules on what happens when a player fumbles a test for using a Tribute. Really it could have done with one less encounter table and a table of fumble results instead.
Physically, Into the Würmhole takes its design cues from Mörk Borg in its use of strong colours. Here they are done mostly as text boxes of psychedelic blue and pink, typically against a black background or swathes of bloody, meaty pink, suggesting something intestinal… The writing is generally clear, but given the short length of the booklet, does suffer from a certain brevity.
Except with a minor issue or two, Into the Würmhole and its scenario is incredibly easy to grasp and easy to bring to the table. Its scenario is short, probably offering no more than a couple of hours’ worth of play, but will nevertheless, provide a taster of the future that Vast Grimm has for us—an icky, festering, vile future with what is essentially a grim and perilous version of Fantastic Voyage.
Posted by pookie at 12:00