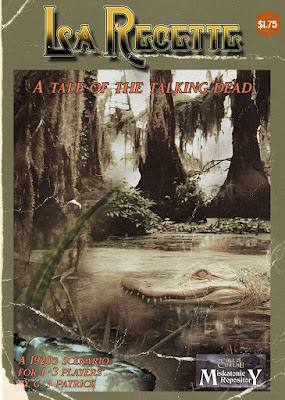 Setting: Jazz Age Louisiana Bayou Country
Product: Scenario
What You Get: Sixteen page, 5.29 MB Full Colour PDF
Elevator Pitch: Voodoo treasure hunt hoedown with a corpse in the trunk.
Plot Hook: When you need a dead man to talk, sometimes you got to do the voodoo that you do.
Plot Support: Detailed plot, one good handout, five NPCs, one spell, and three pre-generated Investigators.
Production Values: Good.
Pros
# Short, one-session, one to three Investigator scenario
# Suitable as a one-shot or first part of a very dark campaign
# Solid NPCs the Keeper can sink her roleplaying teeth into
# Strong Pulpy plot confronts the Investigators with the Mythos
# Entertainingly sweaty set-up and plot
# Advice on using the plot with another backstory
# Scope for the set-up to be played out
# Set-up begging to be told in a flashback in a roadside interrogation
# Whole scenario begging to be told in a flashback in a police interrogation
Cons
# Requires a strong edit
# Requires access to the Malleus Monstrorum (alternatives suggested)
# Does involve human sacrifice upon the part of the Investigators
# Adult tone means it may not be suitable for all players
# Begins en media res
Conclusion
# Requires a strong edit
# Whole scenario begging to be told in a flashback
# Entertainingly hot, sweaty, and desperate zombie noir set-up and plot
Posted by pookie at 12:00